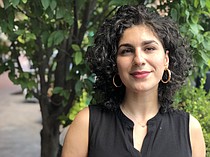 Staff Reporter Seyma Bayram is from the Kurdish region of Turkey and grew up in The Netherlands and New York. She is a graduate of the Columbia Journalism School and the State University of New York at Binghamton.

Mayor Chokwe A. Lumumba reiterated to Jackson residents Thursday that the City of Jackson’s ban on gatherings of 10 or more people and limitations on local restaurant operations, as part of efforts to curb the spread of COVID-19, are still in place.

Living under unusual, high-pressure circumstances and without access to adequate health care or nutrition has forced the nation’s prisoners to cultivate a kind of secret knowledge that others on the outside might not possess.

JPD Will Not Change Arrest Policy Amid COVID-19 Outbreak

The Jackson Police Department is not making changes to its arrest protocols in the wake of COVID-19, even as other departments across the country are rethinking their own policing strategies in order to mitigate the spread of the infection at precincts and in overcrowded jails.

Hinds, D.A. Evaluating Release of Some Pretrial Detainees Due to COVID-19

As the COVID-19 pandemic continues to ravage the country and globe, advocates warn of the unique health risks the easily contracted virus poses for the 19,000 people serving sentences inside Mississippi state prisons and the more than 5,200 people locked up and awaiting trial in county jails.

City Responds to COVID-19 with Emergency Measures, Scales Back Operations

Today, Mayor Chokwe A. Lumumba declared a state of civil emergency in the City of Jackson due to the coronavirus outbreak, signing additional executive orders to limit the number of people in a gathering and shutter some municipal buildings.

Mississippi Voters on Biden Landslide: 'Joe Knows Us, and We Know Joe'

Biden won Mississippi with an overwhelming 81.1% of the Democratic vote compared to Sanders' 14.8%. The majority of people who showed up at the polls in Hinds County—83.2%—voted for Biden, and 14.3% voted for Sanders.

Biden in Mississippi: Credits the 'African American Community' for Comeback

Themes of unity and overcoming hate penetrated the remarks of former Vice President Joe Biden and his supporters during the Democratic presidential hopeful's visit to Jackson yesterday.

Jackson's saga of a troubled contract with Siemens Inc. and subcontractors for new water meters seemed to come to an end on Feb. 19 when Mayor Chokwe A. Lumumba announced an $89.8-million settlement with the multinational corporation.