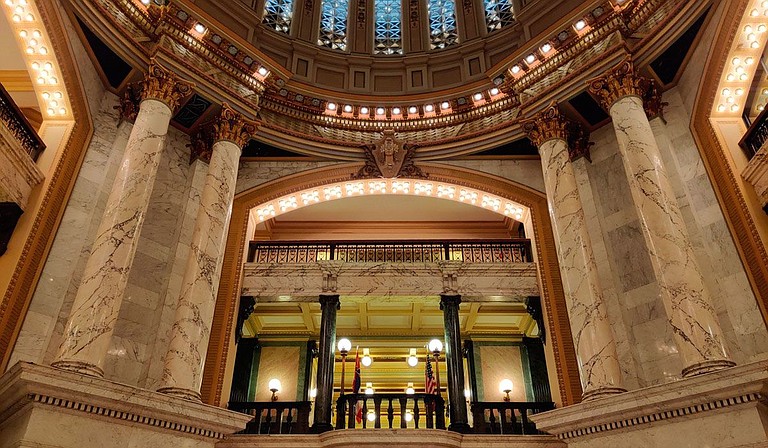 Anyone in Mississippi could cite “a sincerely held religious objection” to avoid a public or private employer's COVID-19 vaccination mandate, under a bill that advanced Wednesday at the state Capitol. Photo by Nick Judin

JACKSON, Miss. (AP) — Anyone in Mississippi could cite “a sincerely held religious objection” to avoid a public or private employer's COVID-19 vaccination mandate, under a bill that advanced Wednesday at the state Capitol.

COVID-19 vaccine mandates have not been widespread in Mississippi, but Republican Sen. Brice Wiggins of Pascagoula, said President Joe Biden’s attempt to set a mandate for federal contractors could have caused big problems for Mississippi’s largest private employer, Ingalls Shipbuilding. Wiggins said he is “proudly vaccinated” but believes getting the vaccine should be a personal choice.

“To me, this is about government overreach,” Wiggins said.

The spectators' galleries were packed Wednesday, and people applauded as some senators denounced vaccine mandates.

Mississippi has one of the lowest COVID-19 vaccination rates in the United States. About 51% of eligible residents in the state have received at least two doses, according to a Mayo Clinic vaccine tracker. The national rate is 65.1%.

More than 12,000 Mississippi residents have died of COVID-19 since the pandemic began two years ago, according to the state Health Department.

House Bill 1509 passed the Senate 36-15 on Wednesday, with Republicans in favor and most Democrats opposed. One Democrat did not vote. A version of the bill passed the House 74-41 in January, also mostly along party lines. Because the Senate made changes, the bill will go to final negotiations.

The bill says Mississippi government entities could not withhold services or refuse jobs to people who choose not to get vaccinated against COVID-19. That prohibition includes state agencies, city and county governments and schools, community colleges and universities.

The bill specifies that COVID-19 vaccinations could not be required for children to attend school or day care, although Mississippi has some of the tightest requirements in the nation for other types of childhood vaccinations.

Public health officials say COVID-19 vaccinations do not always prevent illness, but are effective at decreasing severe cases leading to hospitalization or death.

Some other Republican-led states have enacted laws or are considering legislation that would ban COVID-19 vaccination mandates. Those efforts have largely been motivated by opposition to the Biden administration's attempts to require vaccinations or testing by some employers, health care providers and federal contractors.

The U.S. Supreme Court ruled Jan. 13 that the Occupational Safety and Health Administration had overstepped its authority in trying to require workers at large companies to get vaccinated or face regular COVID-19 testing. OSHA withdrew the rule but still encourages workers to get vaccinated.

Mississippi Republican Gov. Tate Reeves has said repeatedly that he would not require state employees to be vaccinated against COVID-19.