‘Babies in the Hospital’: Mississippi Drastically Lags in Child and Pediatric Vaccinations 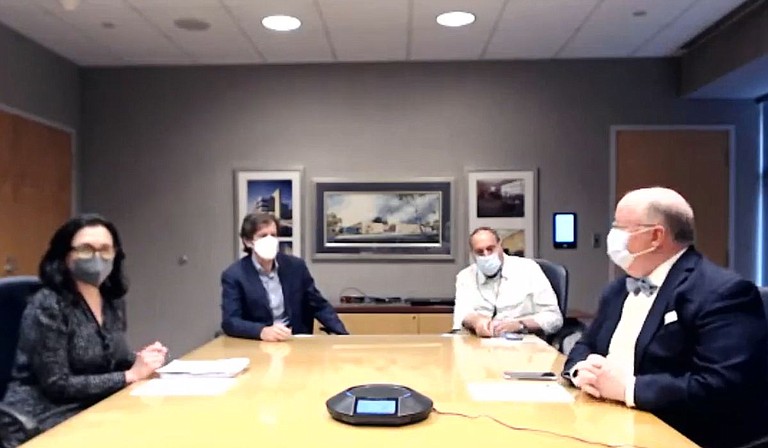 Mississippi ties with Louisiana and Alabama for the lowest vaccination rates among children in the nation. Continuing pediatric hospitalizations and deaths recently prompted state health leadership to urge parents to get their children vaccinated. Image courtesy Mississippi State Medical Association

As COVID-19 continues its decline across Mississippi and the country, state health leadership warns that hospitals are still seeing pediatric patients, while vaccinations in children are lagging far behind the national average.

Dr. Anita Henderson, president of the Mississippi Chapter of the American Academy of Pediatrics, cautioned that underutilization of pediatric vaccines means she is still seeing children being hospitalized.

“Unfortunately we're still having kids get sick,” Henderson said in a Feb. 25 press briefing with the Mississippi State Medical Association. “I hospitalized a 2-month-old this week with COVID. I don't like putting babies in the hospital, but we're still doing it, and I did it this week.”

The Mississippi State Department of Health reported four pediatric deaths due to COVID-19 so far this year, with three deaths occurring in January and one in February.

Henderson warned that if a child recovers from COVID but then comes down with an illness, the possibility exists that it could be Multisystem Inflammatory Syndrome.

Symptoms of MIS include fever, rash, cardiovascular abnormalities, and red eyes or lips.

“If your child has recovered from COVID and two to four-to-six weeks later develops an illness, please get to your pediatric office for treatment,” Henderson said.

MIS is most prevalent in the 5-to-11 age group, but Mississippi lags behind almost every other state in pediatric vaccinations.

“Unfortunately in Mississippi we're still only at 10% of our 5-to-11-year-olds fully vaccinated,” Henderson said. “Fourteen percent have had one dose and that is unfortunately still last in the nation, tied with Alabama and Louisiana.

Henderson urged parents to get their kids vaccinated to help lower instances of MIS, as well as pediatric hospitalizations and deaths.

“That 5-to-11 age range is the age range where we have the highest rates of Multisystem Inflammatory Syndrome, so we really want to try to protect those kids so we can keep them in school and keep them protected,” Henderson said.

She also vouched for the vaccine’s safety.

“We've given thousands of doses of the 5-to-11 and the 12-and-up in my clinic,” she said. ‘We have not had any bad outcomes, but as I've told you, I've hospitalized multiple children with COVID, and we've had children who've passed away. So kids are needing to get their COVID vaccine and they can get that at their pediatric office.”

For many counties in Mississippi, the Centers for Disease Control and Prevention recently loosened their masking guidelines. Only a select amount of counties still possess high enough case numbers that the CDC considers them high-risk and recommends general indoor mask adherence, with specific county data available here.

State Epidemiologist Dr. Paul Byers, nonetheless, recommended mask-wearing in the event of any symptoms of illness.

“It's always going to be that if an individual wants to wear a mask and chooses to wear a mask that that's the right thing to do,” Byers said. “If you're having symptoms, wear a mask; if you’ve been exposed to somebody, wear a mask. If you test positive for COVID, you certainly need to isolate during that time frame, but afterwards, wear a mask.”

“We know from our own experience that masks reduced the transmission of flu in the previous season, because we had, essentially, not much at all,” he said.

“There still is transmission out there, so we're still wearing masks,” State Health Officer Dr. Thomas Dobbs said. “We're trying to protect ourselves and protect one another.”