Reeve’s State of The State Touts Accomplishments Amid Troubles 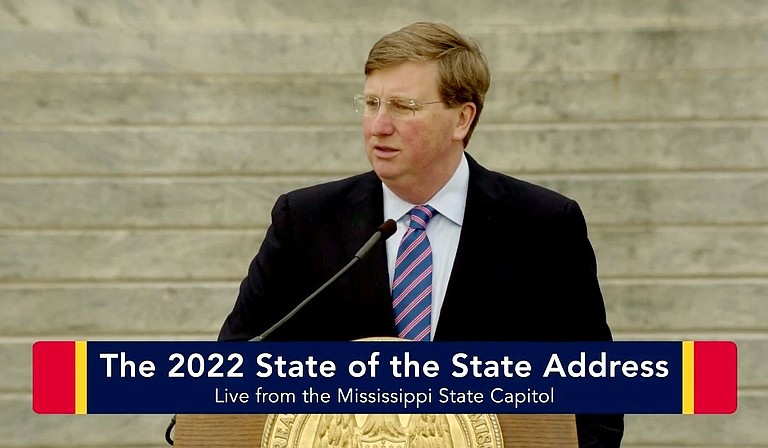 Gov. Tate Reeves spoke on past accomplishments and future priorities for his administration. The governor held the speech outside for the third year in a row amid record numbers of COVID-19 cases. Photo courtesy State of Mississippi.

Gov. Tate Reeves gave his annual State of the State speech this Tuesday, outlining his administration’s accomplishments over the last year and establishing his priorities for 2022—including controversial topics like recent legislative action against what some lawmakers call the spectre of critical-race theory in Mississippi schools, and an ongoing battle over abortion at the U.S. Supreme Court.

“Mississippians are leading the charge to defend those children. Mississippi in the Supreme Court's landmark case is on a path to preserving millions of lives for generations to come,” Reeves said. “There is no excuse for America's abortion laws to be closer to the Chinese communists than the rest of the Western world.”

Mississippi is in the midst of suing China for damages related to the COVID-19 pandemic, though that case is languishing in the complexities involved with international court proceedings. In that suit, Mississippi Attorney General Lynn Fitch made allegations that China conspired to hide the initial outbreak.

“Too many Mississippians have suffered as a result of China’s cover-up,” Attorney General Fitch said. They must not be allowed to act with impunity. Mississippians deserve justice and I will seek that in court.”

“This so-called lawsuit is very absurd and has no factual and legal basis at all,” Chinese Foreign Ministry Spokesman Geng Shuang responded at the time.

In addition to curtailing abortion in the state, Reeves outlined his plan to increase support for mothers-to-be.

“We should be doing everything in our power to promote a culture of life,” Reeves said. “In the coming months we will be promoting plans to further protect mothers in our state to ensure that they don't just receive the basics, that they get the best possible care during their pregnancy.”

Women in Mississippi bring home an average of 27% less money than men, while that gap rises to 44% less for women of color.

“We will work to make it even easier to adopt a Mississippi child into a forever home,” Reeves said. “We will go further than just preventing abortion.”

In addition to calling for a doubling in the Capitol Police in capitol police, Reeves touted recent criminal justice reform in the state’s prisons under new Mississippi Department of Corrections Commissioner Burl Cain.

“Two years ago as I stood before you and as I took office, we were facing prison riots that resulted in serious violence,” Reeves said. “To address the issues in the system we needed a cultural reset to ensure that we took control and took proper care of those who were serving time.”

“Time in prison often leads to despair,” Reeves said. “When you have a lack of hope you don't just serve your time, you commit to a life of crime. And instead of returning to society, having taken your discipline, the cycle of violence continues. The inmate returns. We can break that cycle for hundreds of inmates, and that will lead us to a safer state.

Though prisons and jails throughout the state remain troubled, the State Legislature expanded parole eligibility last year, expanding the possibility of freedom for thousands of incarcerated Mississippians.

“We know that our economic situation would not be so secure if it were not for our handling of the COVID-19 pandemic,” Reeves said. “We have lost many Mississippians to this virus, and we mourn their loss every day.

“We also know we cannot lock ourselves away behind screens and live in fear. We choose to protect ourselves as we see fit."