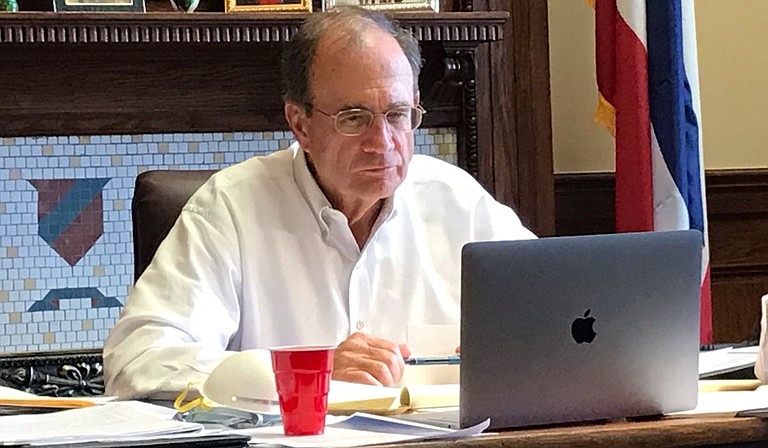 Mississippi Lt. Gov. Delbert Hosemann has tested positive for COVID-19 after the opening day of a legislative session when Hosemann and many other people were walking around the Capitol without wearing masks. Photo courtesy Delbert Hosemann

JACKSON, Miss. (AP) — Mississippi Lt. Gov. Delbert Hosemann has tested positive for COVID-19 after the opening day of a legislative session when Hosemann and many other people were walking around the Capitol without wearing masks.

“He currently has no symptoms and has been double vaccinated and boosted,” according to a news release from Hosemann's office Wednesday. “He is quarantining for five days according to the recommendation of the State Health Officer and CDC guidelines."

The lieutenant governor's office was notifying people who may have been exposed.

The three-month legislative session began at noon Tuesday, with Hosemann, a 74-year-old Republican, presiding over the Senate. He spoke for more than 15 minutes, unmasked, during an afternoon news conference in the Capitol press room. Most of the journalists in the room with him were masked.

Hosemann was tested late Tuesday afternoon after learning he had been exposed to someone with COVID-19, spokesperson Leah Rupp Smith said. He received his test results Wednesday.

Hosemann had COVID-19 during the summer of 2020. Although he was not hospitalized then, Hosemann — who is a runner — has said he had difficulty walking very far because of shortness of breath.

House Speaker Philip Gunn, a Republican, said Tuesday that if people at the Capitol start testing positive for COVID-19, the House could return to precautions it used previously. Those included limiting the number of people in the House chamber and in committee rooms, with some lawmakers participating in meetings by videoconferences.

According to data from Johns Hopkins University, the seven-day rolling average for daily new cases in Mississippi increased over the past two weeks from around 624 on Dec. 20 to around 4,406 on Monday.

After the announcement about Hosemann's positive test Wednesday, the majority of the people at the Capitol were still unmasked. The Senate Education Committee canceled an afternoon meeting, where they were expected to discuss teacher pay raises.

A clinic for booster shots was set up in a room on the second floor of the Capitol building. Only a handful of people walked in to get their shots in the morning.

Lobbyist Hope Ladner was one of the people getting booster shots. Ladner said she planned to get a booster even before learning the lieutenant governor had tested positive. She said she's at the Capitol most days of the session, and wanted the extra protection to be safe.

“It was just convenient,” she said. “To be honest, I’m not as concerned about myself, but I have an 85-year-old mother that I am very concerned about. She’s been vaccinated and boosted, but I feel like it’s my responsibility to do what I can to make sure she’s protected. That’s why I’m protecting myself.”