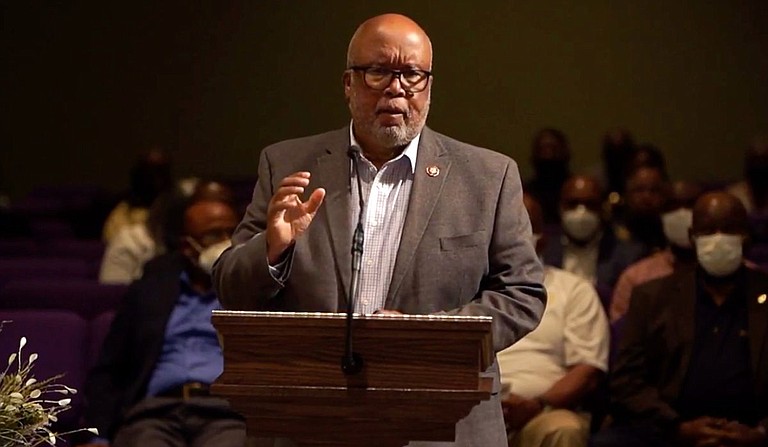 The lone Democrat in Mississippi's congressional delegation, Rep. Bennie Thompson, wanted his district to grow by encompassing all of Hinds County. Photo courtesy City of Jackson

JACKSON, Miss. (AP) — Mississippi legislators begin their three-month session on Tuesday with a clear idea of several issues that will come up for debate.

One of the first orders of business will be adopting a plan to redraw the state's four U.S. House districts, expanding the majority-Black 2nd District because it has lost population during the past decade.

The lone Democrat in Mississippi's congressional delegation, Rep. Bennie Thompson, wanted his district to grow by encompassing all of Hinds County. Instead, the plan advanced by a Republican-led redistricting committee will stretch the 2nd District farther south along the Mississippi River and allow Republican Rep. Michael Guest to keep affluent areas of northeastern Hinds County in the 3rd District.

Republicans hold strong majorities in the state House and Senate, so the plan recommended by the redistricting committee will be rubber-stamped.

At some point during the session, legislators will reapportion the 122 districts for the state House and the 52 districts for the state Senate, also to account for population changes revealed by the 2020 Census. This task is complicated because of the number of districts and because of the egos involved. It's likely that at least one current legislator will see his or her district dissolved to make room for a new district in a growing area.

Medical marijuana is a volatile issue that will attract lots of attention. In November 2020, a wide margin of Mississippi voters approved an initiative to allow medical marijuana, and a program was supposed to be in place by the middle of 2021. In May, the state Supreme Court ruled that the initiative was not properly on the ballot because Mississippi's initiative process itself was outdated — a decision that also left the state without a way for people to petition to put issues in front of voters.

After the court ruling, a Republican-led group of legislators spent months negotiating on a medical marijuana program with the hope that Republican Gov. Tate Reeves would call the House and Senate into special session to put it into law during the fall. Reeves, however, has balked at their plan. He says it would allow Mississippi to be overrun with recreational marijuana.

A medical marijuana plan is likely to be put into law during the regular session, with or without the governor's blessing. Reeves recently said he will try to persuade some Republicans to stand with him if he vetoes a bill.

Teacher pay is another big topic for the 2022 session. Lots of politicians talk a good game about wanting to help teachers, but will it happen? A pay raise was not included in the initial budget recommendations made by legislative leaders.

An effort to eliminate the income tax could be the biggest fight of the session. House Speaker Philip Gunn really wants it — and if he gets credit for doing it, that could help him among conservatives if he challenges Reeves in the 2023 Republican gubernatorial primary. But does Lt. Gov. Delbert Hosemann want this? It's not clear he does. A bill can't go to the governor if it can't pass the Senate, where Hosemann presides.

Legislators will debate ways to spend $1.8 billion in federal pandemic relief money. Leaders say they want projects that would bring generational change. Could this include significant spending to improve Jackson's troubled water and sewer system? Or will money for water and sewer improvements get divided among a lot of cities, counties and small water associations?

Legislators frequently grab headlines with social issues. Republicans are likely to try to ban the teaching of critical race theory, even though there's no indication it's being taught in Mississippi schools.

Some lawmakers could try to ban COVID-19 vaccine mandates, even though Reeves has made clear he does not intend to ever set a statewide mandate. Mississippi has some of the tightest requirements in the U.S. for children to be vaccinated against other diseases before entering day care or public or private school, and the state generally receives praise for this from public health advocates. Will the fervor for opposing COVID-19 mandates cause legislators to rethink other vaccine requirements? That's one fight that the overworked Health Department probably would like to avoid.