Abortion Rights Funds Brace for Impact Ahead of Court Ruling 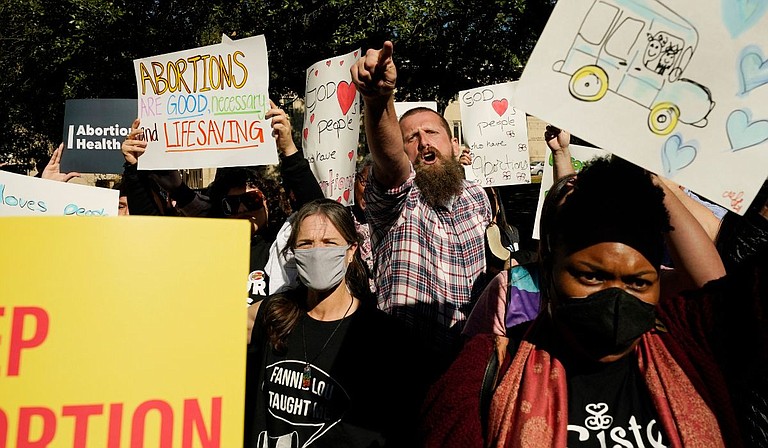 Texas has tightened abortion restrictions over the past two decades, leading women there to increasingly seek out-of-state abortions. Even before the new law took effect last September, at least half of the women who sought help from the fund got abortions in neighboring states. Today, nearly all of them do. Photo by Rogelio V. Solis via AP

In the past few months, the number of women who call Fund Texas Choice has doubled to more than 100 per week. The demand, driven by a state law banning abortions at roughly six weeks of pregnancy, has forced the abortion rights fund to hire more people. But it’s still been difficult to keep up with the avalanche of requests.

Texas has tightened abortion restrictions over the past two decades, leading women there to increasingly seek out-of-state abortions. Even before the new law took effect last September, at least half of the women who sought help from the fund got abortions in neighboring states. Today, nearly all of them do.

Simultaneously, the Supreme Court also has before it an abortion case from Mississippi, in which the conservative majority signaled in December they might limit abortion rights and could even overrule Roe v. Wade and Planned Parenthood v. Casey, the landmark cases declaring a nationwide right to an abortion. If that happens, each state would determine abortion rights for its residents.

Both groups in favor of and against abortion are hoping to get more funds to expand their work. In particular, abortion funds, groups that raise money to aid women get abortions, say they would need more donations to meet a surge in demand as more women seek out-of-state abortions.

“What keeps me up at night is sustainability,” said Rebecca Dreke, Fund Texas Choice's chief operating officer. “We’re trying to serve as many clients as possible. But when you have an average cost of $850-$1,000 per client, we are obviously limited by the funds that come in.”

Some abortion funds provide money to women to pay for abortions, while others, like Fund Texas Choice, cover transportation, lodging, child care and other travel costs for the procedure. Neighboring Oklahoma, Louisiana and New Mexico have been popular destinations for Texas women. Though, some are traveling as far as Chicago and New York to avoid backlogs at nearby clinics.

Debasri Ghosh, the managing director of The National Network of Abortion Funds, a collective of 90 independently run abortion support groups, says her organization has been able to shore up fundraising in response to the Texas law, and the high court hearing in December on the Mississippi case. It’s unclear if the local funds across the country have seen similar uptick in contributions, but Ghosh says they've been encouraging donors to give locally, or to funds in states with more restrictive abortion laws.

The abortion fund in Texas, for example, saw a boost in donations last year, but that has since tapered off. These drops have been a lingering concern for abortion rights advocates, who don’t want the funds to be reliant on the rush of donations that come after “crisis moments.”

“This crisis is sustained and ongoing,” Ghosh said. “It’s not something that ebbs and flows. We see the needs just ramping up over time.”

NNAF, which serves as a middleman between foundations and abortion funds, plans to distribute more than $10 million this year to help abortion funds beef up their budgets, the largest amount it has ever given in a year.

Many local and regional funds rely on individual donors. Support from foundations has picked up in the past few years, Ghosh said, but donations earmarked to cover these direct costs have been much smaller than those made for legal and advocacy efforts.

One analysis from the progressive charitable watchdog group National Committee for Responsive Philanthropy indicated private foundations contributed about $1.7 billion to support reproductive rights from 2015 to 2019, but less than 2% of that went to abortion funds.

“Abortion funding is pretty radical from a philanthropic perspective, because it involves putting resources directly in the hands of people who need abortions right now,” said Gretchen Sisson, who serves on the board member on WDN Action, a progressive political nonprofit that’s not required to disclose its donors.

According to data from the philanthropy research organization Candid, which includes partial figures for donations made during and after 2019, NNAF itself has received at least $27.6 million from institutional donors in the last 10 years. Some of that money has come from The Susan Thompson Buffett Foundation, an organization formed by billionaire Warren Buffett that’s been a major supporter of abortion-rights groups. (The foundation does not publicly comment on its grants, and did not respond to an AP inquiry about how it plans to distribute funding this year.)

A spokesperson for another NNAF funder, the David and Lucile Packard Foundation, said their reproductive rights grant budget for 2022 will remain about the same as prior years, roughly $12 million. The William and Flora Hewlett Foundation, another donor, told The Associated Press they will increase their $15 million budget this year, but did not say by how much.

Separately, Ms. Foundation for Women, a group that holds roughly $46 million in assets, said last month it’s giving $100,000 to a nonprofit that supports women seeking abortions in six Southern states. Similar types of public announcements have been rare, though some funders might be making changes to their portfolios more quietly.

Elizabeth Barajas-Román, who heads an alliance of more than 100 funds and foundations called Women’s Funding Network, said many donors have been talking behind the scenes about how to best move money. Abortion rights supporters say the best funding paths involve providing direct funding for women in the short term while also funding advocacy and other efforts to change laws over time.

In states where abortion funds don’t exist, some organizations in the alliance are setting up groups, called giving circles, that can quickly raise money and give it to women or organizations that need it, Barajas-Román said. Others are experimenting with direct cash assistance, but there are lingering questions about what funders can continue to do in a state that might ban abortion.

“It’s a very different state of affairs if something becomes illegal,” Barajas-Román said.

Anti-abortion groups are gearing up for more work, too. Diane Ferraro, who heads the anti-abortion nonprofit Save the Storks, a group that offers ultrasounds to women outside of abortion clinics, says more churches are ordering the group’s “stork buses” in anticipation the Supreme Court might overturn Roe v. Wade. She said about 60 buses across 27 states saw over 4,000 women last year, and more funding would help get more buses on the road.

If the court strikes down Roe, Ferraro said the organization will focus more on states like New York and California, where more women might travel for abortions.

“We’re going to need to be there more than ever because women will still seek abortions,” she said. “And it’s so important that we are reaching those women at their time of greatest need. We feel like there is an alternative choice that’s needed for these women.”

Others are focusing on legislation. Kristan Hawkins, president of the anti-abortion group Students for Life America, said her organization has lobbied state legislatures to ban abortion pills. The political arm of their group, Students for Life Action, will also be involved in Republican primaries, she said, so candidates elected on platforms that oppose abortions “actually work tirelessly to pass pro-life legislation," and don’t bury bills in committees.