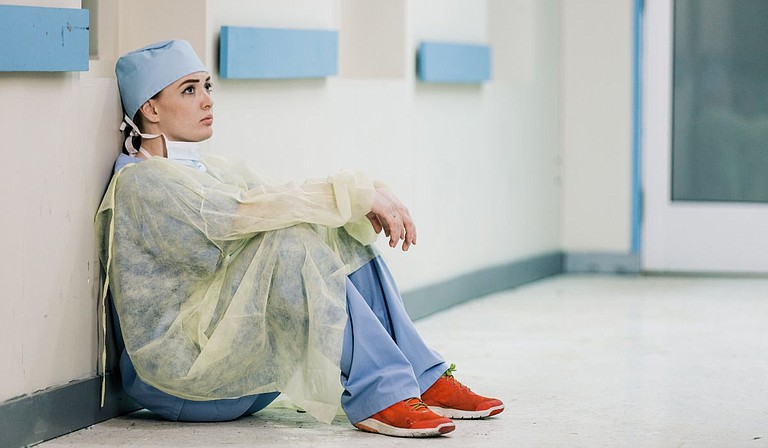 Religious exemptions are increasingly becoming a workaround for unvaccinated hospital and nursing home workers who want to keep their jobs in the face of federal mandates that are going into effect nationwide this week. Photo courtesy Shopify Partners on Burst

When nurse Julia Buffo was told by her Montana hospital that she had to be vaccinated against COVID-19, she responded by filling out paperwork declaring that the shots run afoul of her religious beliefs.

She cited various Old and New Testament verses including a passage from Revelations that vaccine opponents often quote to liken the shots to the “Mark of the Beast.” She told her managers that God is the “ultimate guardian of health” and that accepting the vaccine would make her “complicit with evil.”

Religious exemptions like the one Buffo obtained are increasingly becoming a workaround for unvaccinated hospital and nursing home workers who want to keep their jobs in the face of federal mandates that are going into effect nationwide this week.

In some institutions, religious exemptions are being invoked by staff and approved by managers in large numbers. It’s a tricky issue for hospital administrators, who are struggling to maintain adequate staff levels and are often reticent to question the legitimacy of the requests.

“We’re not going to have a Spanish inquisition with Torquemada deciding if your religious exemption is granted or not by the Grand Inquisitor,” said Dr. Randy Tobler, CEO of Scotland County Hospital in Missouri, where about 25% of the 145 employees remain unvaccinated and 30 of them have been granted exemptions.

Tobler, who is vaccinated, said some employees threatened to quit if they were required to get the shot.

“For people that want to judge what we’re doing in rural America, I’d love them to come and walk in our shoes for a little while, just come and sit in the desk and try to staff the place,” Tobler said.

At Cody Regional Health in Wyoming, about 200 of the 620 staffers have asked for religious exemptions and most have been granted. Montana Gov. Greg Gianforte pledged his support last week to “defending Montanans against discrimination based on their vaccination status" in an open letter to medical workers and urged the unvaccinated to consider seeking exemptions. And West Virginia lawmakers have advanced a proposal with health care workers in mind that would let those who quit because their exemption was denied collect unemployment.

As of Monday health care workers in 24 states — all but three of which went for then-President Donald Trump in the 2020 election — will be required to have received their first vaccine dose or an exemption. The mandate already took effect late last month in jurisdictions that didn’t challenge the requirement in court, although enforcement actions won’t begin immediately.

It affects a wide swath of the industry, covering doctors, nurses, technicians, aides, hospital volunteers, nursing homes, home-health agencies and other providers that participate in the federal Medicare or Medicaid programs.

Beyond the federal mandate, some hospitals and cities have imposed their own requirements. One of the most sweeping is in New York City, where public workers faced termination if they weren't vaccinated by Friday. The military branches have their own vaccine mandates, but commanders have been loath to grant religious exemptions.

While reasons given for seeking exemptions vary, the vaccines’ remote link to fetuses aborted decades ago is often cited — lab-grown cell lines descended from those fetuses were used in testing and manufacturing processes. The vaccines do not contain fetal cells, however, and workers generally are seeking the exemptions without the backing of major denominations and prominent religious leaders.

But as the health care mandate takes effect, hospital leaders acknowledge that they see the exemptions as a way to retain staff at a time when resources are already stretched thin.

“Our position has been we would we want we want everyone vaccinated,” said Brock Slabach, chief operations officer for the National Rural Health Association. “But we also think that access to care is incredibly important."

Similar stories abound across the country.

At the 25-bed Community Hospital in McCook, Nebraska, in the southwestern part of the state, about 20% of the 320 employees have not been vaccinated. About 35 applied for exemptions, and others are still deciding what to do. The hospital has rejected some requests that relied on specious religious reasoning.

“If it’s a complete, like, essay on the science behind why this shouldn’t be allowed, or a complete essay on why a certain political party or political figure is an idiot, which we’ve seen, we don’t go with that because that’s not religious at all,” hospital president and CEO Troy Buntz said. “We do push back on those, but I don’t know if other people are even reading the exemptions as much as they probably should be.”

In Mississippi, some hospitals have nearly all their employees vaccinated while others are closer to the 50% to 70% range, according to Richard Roberson, the state hospital association’s general counsel. Since the mandate was announced, he has received dozens of calls inquiring about how the exemptions work.

“I don’t know how many there will be, but we’re in the heart of the Bible belt. And so that is something that is very near and dear to everyone’s heart,” Roberson said.

And at the 14-bed Holton Community Hospital in rural northeastern Kansas, 28 out of 193 employees have gotten religious exemptions and one got a medical exemption. The mandate helped nudge the staff vaccination rate from around 75% to nearly 87%, but some younger nurses remain hesitant because of disproven concerns that the vaccine could hurt their fertility, CEO Carrie Saia said.

Saia questioned vaccine resistance among medical workers since they see every day that those in their care with the most severe COVID-19 consequences are overwhelmingly unvaccinated. But “unfortunately, with the COVID 19 pandemic, everything has gotten so political or polarized,” she said.

Buffo, the Montana nurse, said she was in a “state of terror” when the mandate was announced, fearing that it might threaten her career. She asked herself how much she was willing to sacrifice for her values, she added, and turning to the Bible strengthened her resolve to resist what she called the “insidious evil behind the vaccine campaign.”

But Marcella Dahl, a primary care clinic nurse in Sidney, Montana, said she feels like some people are abusing the exemptions and it's alarming that some religious leaders are encouraging the practice.

“Half of the people saying this don’t even go to church,” Dahl said. “I think it puts everybody at risk.”

Faith-based opposition to immunizations in the country historically has been limited to just a relatively few small denominations such as the End Time Ministries and the Church of the First Born. But during the pandemic, some more mainstream preachers have spoken out against the vaccines from the pulpit.

“That’s new, and that’s a problem,” said Dr. Chris Beyrer, an epidemiologist at the Johns Hopkins Bloomberg School of Public Health. “If you are not going to be vaccinated and you’re going to be caring for the frail, the elderly, you should get out of health care."