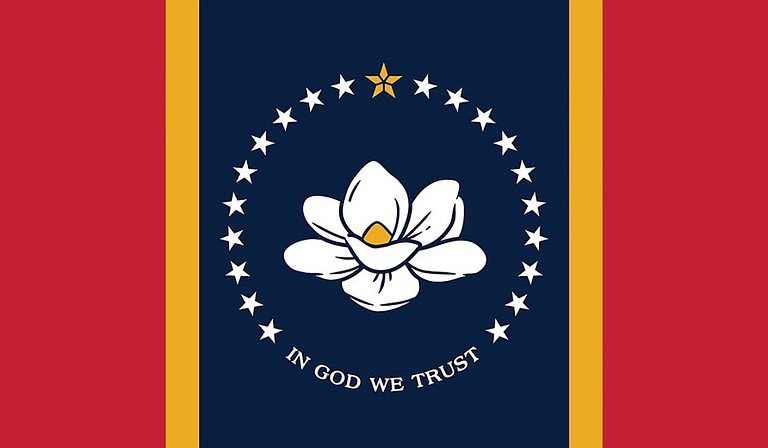 Mississippi is on the verge of scuttling a state song with racist roots, two years after it retired a Confederate-themed state flag. Photo courtesy State of Mississippi

JACKSON, Miss. (AP) — Mississippi is on the verge of scuttling a state song with racist roots, two years after it retired a Confederate-themed state flag.

The current song, “Go, Mississippi," takes its tune from a 1959 campaign jingle of Democratic Gov. Ross Barnett. “Roll With Ross" included the lyrics, “For segregation, 100%. He's not a moderate, like some of the gents."

Barnett unsuccessfully resisted integration of the University of Mississippi in 1962, and legislators that year adopted a state song setting new words to his campaign ditty: “Go, Mississippi, keep rolling along. Go, Mississippi, you cannot go wrong.”

Some legislators have quietly sought a new song in recent years, saying the Barnett connection is an embarrassing relic of the bad old days.

The effort gained momentum when Republican House Speaker Philip Gunn opened this year's legislative session by showing a video of “One Mississippi," composed by country music singer and songwriter Steve Azar for the state's 2017 bicentennial celebration.

The Republican-controlled House and Senate on Thursday passed the final version of a bill to replace the Barnett-linked song with “One Mississippi.” The bill also would create a committee to recommend that legislators designate additional state songs later. Tennessee is among states with multiple official songs.

Asked for his opinion on the measure, Republican Gov. Tate Reeves told The Associated Press on Friday that he’s not well-versed in the song proposal because he's been focused on other issues, including teacher pay raises and a tax cut.

Reeves also said he doesn't know the state song and can't recall whether he was supposed to learn it in school.

“I was focused on shooting basketballs,” Reeves deadpanned.

“I don’t think it’s a good idea to take the tune of a racist song and make it for everybody," said Karmen Owens, a 15-year-old freshman at North Pike High School in McComb.

Raniyah Younger, a 17-year-old junior at Jackson's Callaway High, said a new state song should reflect different cultures and “equality of all races and all colors and all sexualities, of course.”

Democratic Sen. Hillman Frazier of Jackson worked for years to retire the Mississippi state flag, the last in the nation to feature the Confederate battle emblem. Frazier said Mississippi should not have a song affiliated with a segregationist governor, but he wants a committee to examine Mississippi's deep musical heritage and come up with a new song.

“Most people don’t know the state song. They never sing it," Frazier said Thursday. "So, six months trying to get it right wouldn’t hurt a thing.”

“It’s one more thing that doesn’t portray Mississippi in its best light,” Boyd said. “We need things that represent the state and really highlight the amazing people we have.”