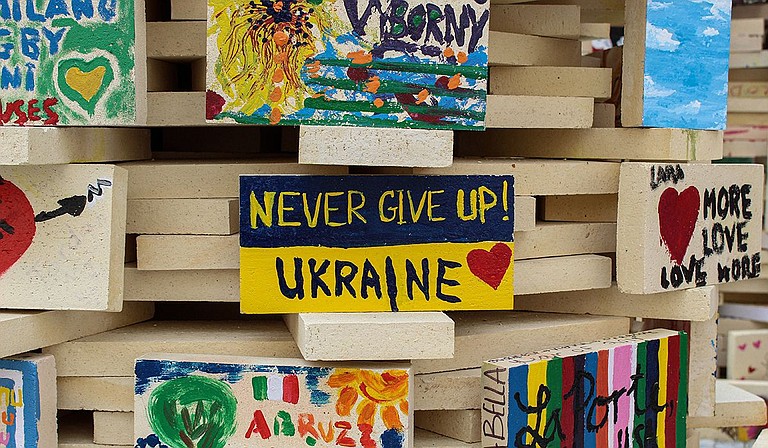 Mitchell McGinnis and many other Mississippians have raised funds to support Slavik’s family during this time of unrest within Ukraine. To further that goal, McGinnis has helped organize a benefit concert on Friday, April 1, in the parking lot outside of 601 Studios. Photo by Yura Khomitskyi on Unsplash

In 2010, Mitchell McGinnis met a man named Slavik, who is originally from Ukraine, while working at Lake Forest Ranch as a camp counselor. Forming a bond, the two stayed in communication, and McGinnis traveled to Ukraine in the summer of 2011 to visit Slavik and his family, as well as to work at a summer camp near the city of Sumy. While in Mississippi, Slavik and his family members, Igor and Natasha, formed a close circle of Southern friends.

Over the past few weeks, McGinnis and many other Mississippians have raised funds to support Slavik’s family during this time of unrest within Ukraine. To further that goal, McGinnis has helped organize a benefit concert on Friday, April 1, in the parking lot outside of 601 Studios (1935 Lakeland Drive, Suite 300). Local musicians from the metro area have volunteered to perform. 601 Studios’ music students will also perform for an hour. No admission fees will be required, but guests are invited to donate whatever amount they can spare, should they choose.

The benefit concert will begin at 6 p.m. this evening and last until approximately 9 p.m.

Photo by Lena Balk on Unsplash

On Sunday, April 3, from 3 p.m. to 6 p.m., The TRANS Program, HRC Mississippi, HRC National, ACLU of Mississippi, Immigrants Alliance for Justice, and Equity of Mississippi, My Brother's Keeper, The Spectrum Center, Capital City Pride, PFLAG of Jackson and Awakening Love will be hosting watch parties to celebrate Transgender Day of Visibilty, which is internationally recognized on March 31 each year.

During the free hybrid event, people can either attend in-person at Fondren Park in Jackson, or they can participate virtually on YouTube by searching for “Mississippi Transgender Day of Visibility 2022 Event.” By registering in advance, attendees can enter a raffle to win “swag” prizes. Those attending in person are asked to bring their own lawn chairs should they want to sit.

Official watch parties will also be held in Hattiesburg, Miss., at The Spectrum Center (210 S. 25th Ave., Hattiesburg) and in Tupelo, Miss., at The Link Center (1200 W. Main St., Tupelo). Snacks and refreshments will be provided at either location.

‘The Wizard of Oz’

The Belhaven Theatre Department will be hosting a production of “The Wizard of Oz,” following the story of Dorothy and her loyal companions down the Yellow Brick Road, under the direction of Dr. Elissa Sartwell, ​​the department’s chair and a professor of theater. The Blackbox Theatre kicked off its first weekend of performances at the Center for the Arts (835 Riverside Drive) on campus on March 31. Additional showtimes include April 1, April 2, April 7, April 8 and April 9 at 7:30 p.m. The two Saturday dates, April 2 and April 9, will also have 2 p.m. matinees.

Tickets for general admission are $10 and $5 for students and senior citizens. Admission is free for Belhaven faculty, staff, students and their immediate families. The doors open at 7 p.m.

The Mississippi Metropolitan Ballet will also be hosting performances of “The Wizard of Oz” at Jackson Academy Performing Arts Center (4908 Ridgewood Road) on Saturday, April 2, at 3 p.m. and on Sunday, April 3, at 2 p.m. Tickets in the front half of the audience seating are $35, and tickets in the back half are $30.

After the performance, families are welcome to attend The Land of Oz ticketed event right after the show. Children get to meet the cast, take on-stage photos with ballet characters, enjoy light refreshments and receive a take-home souvenir. Land of Oz tickets are sold separately from the Wizard of Oz tickets. Adults get complimentary admission with the purchase of one child’s $15 admission.

For more information on local events throughout the week and beyond, visit jfpevents.com.