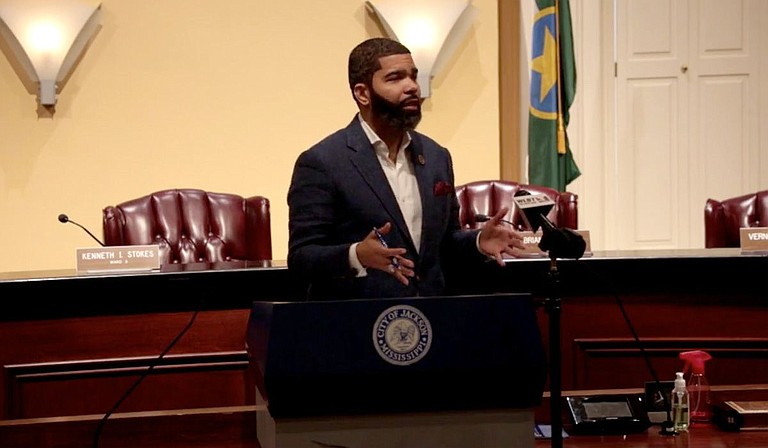 Mayor Chokwe A. Lumumba said at a press briefing on Sept. 20, 2021, that the City of Jackson had executed an emergency garbage disposal contract. However, on Wednesday, Sept. 22, the City Council rescinded the mayor's Sept. 17 emergency declaration, which canceled the emergency contract. Photo courtesy City of Jackson

The City of Jackson has no garbage-disposal contract operational starting Oct. 1 after the Jackson City Council rescinded Mayor Chokwe A. Lumumba's Sept. 17 emergency declaration at a special meeting this afternoon. That overrode the legal basis for the emergency garbage disposal contract that Lumumba announced Monday, Sept. 20, that he executed.

Before Wednesday, a war of words has continued between Mayor Chokwe A. Lumumba and Waste Management over a new garbage disposal contract.

Waste Management, a national company with an outlet in Jackson, contends that it is not legally permissible for it to enter into negotiations for a one-year contract to the City instead of the six years indicated in the City’s request for proposal. The mayoral administration, however, says it is within its legal bounds to offer a one-year contract.

At a press briefing on Monday, Sept. 20, the mayor said that the City had executed an emergency contract with an unnamed garbage disposal vendor, which will take effect at the expiration of the current contract with Waste Management on Sept. 30, one week away. The mayor declared a state of emergency on Friday, Sept. 17, to allow him to circumvent the standard contract procedure given the short time before the end of the City's current waste-disposal contract.

"We've executed an emergency agreement, and we have a local—by coincidence, and I think this is also beneficial—minority group that will be prepared to collect the waste across the city," the mayor said at a press briefing. "We're going to make sure that we can do everything that we can to ensure that the residents don't suffer through their trash not being picked up."

At the briefing, the mayor continued leveling missives against Waste Management, reiterating accusations of poor services and lack of workforce protection. Waste Management has been in charge of the City's waste disposal for 35 years.

"We consistently get calls from west and south Jackson," Lumumba said. "We consistently get calls for inconsistent services or when there are planned roll-throughs, when one day the trash may be picked up at 11, one day it may come at 7 a.m. or 6 a.m, so people are unable to make proper accommodations. Or we get calls where there is one man on the back of a truck, and they have trouble getting to those service areas."

"I do believe that having to enter into an emergency circumstance is difficult. It is not the alternative that I would have preferred," he added. "But I'd rather struggle through this while we put out another RFP than agree to an agreement that gives me trepidation, which we know is a company that we've tried to cure, or give them opportunity to cure the things that we've had problems with."

The mayor said during negotiations that Waste Management agreed to offer a "short-term agreement" but "reneged on that."

"So, what we have now is a history of promises being made, but them not fulfilling those promises,” Lumumba said. He called it “egregious” that the City gets reports of “temporary” staff working for the company for 10 years.

"After the City Council voted down the proposal to make FCC the provider for solid-waste collection services, the Mayor held two meetings with Waste Management," Bryan explained. "However, instead of entertaining a six-year contract such as the one the Mayor recommended with FCC, the Mayor insisted that Waste Management provide a one-year proposal."

"Waste Management will not provide a one-year proposal, and instead requests the City follow its RFP and state law and consider Waste Management's proposal for a six year contract."

The attorney asserts that it is unlawful for the City to enter into a one-year proposal. "Pursuant to Mississippi law, where a request for proposal has a requirement, a

requirement cannot be waived or 'negotiated away,'" the attorney said. "The Office of the Attorney General of the State Mississippi has rendered an opinion on this topic."

In its proposal attached to the letter, Waste Management offered $13.02 per household per month for a six-year contract for current service level with $3.70 for additional services, which will include a Jackson-based call center , investment in “three boom trucks” five days a week, pick up "out of compliance bulk and yard waste (exclusive of storm debris), reducing illegal dumping and beautifying the City."

"(An) attorney General opinion is simply that, an opinion by the attorney general about their interpretation of Mississippi law," he wrote. "As you are well aware, an opinion provides no protection for any one other than the immediate party requesting the opinion. In this case, the language of section 31-7-13 (r) is a better indicator of the meaning of that statute for purposes of the term of the contract and other provisions within the Request for Proposals.”

"Under the current circumstances, it appears that the City and Waste Management disagree as to what is in their best interests with respect to the length of the contract," Williamson added in defense of the City's one-year contract request.

The Jackson City Council held a special meeting on Tuesday, Sept. 21, where the mayor explained that after the council did not approve the contract with FCC Environmental Services, the administration approached Richard's Disposal Inc. as well as Waste Management, which is the current holder of the contract. Richard's Disposal Inc. said they are not able to effectuate a contract based on time constraint. The mayor said that Waste Management "wanted a longer arrangement."

"The administration agreed to look at a longer-term agreement, but asked for a shorter option as well for us to review. In that meeting, they actually agreed to present both options only to come back to the next meeting and not do so," the mayor told the council on Tuesday.

"The emergency vendor did their research to find out how many trucks were rolling, how many employees are servicing our area, and they have compiled all of that in an effort to make certain that they can facilitate the services that we need," the mayor told the city council. "They will be working with people who are familiar with routes in our city, working with people who are familiar with the communities in which they serve."