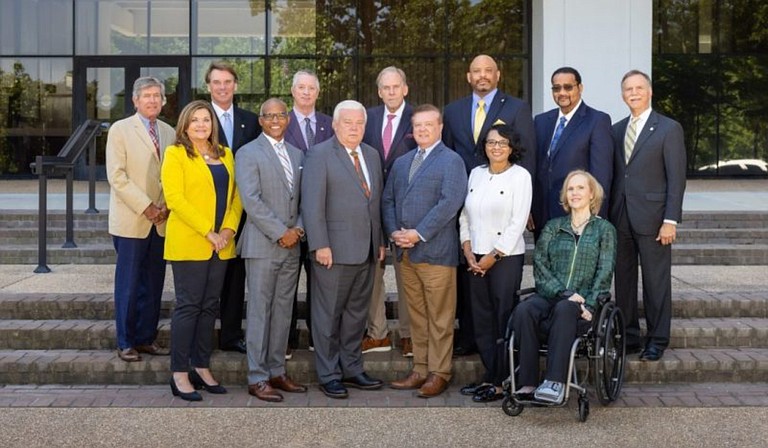 The Mississippi Institutions of Higher Learning Board of Trustees voted to mandate vaccines for all employees of universities with federal contracts or grants on Oct. 25, 2021. Photo courtesy IHL

The Mississippi Institutions of Higher Learning Board of Trustees voted today to mandate COVID-19 vaccines for all employees at state universities that receive federal contracts with limited exceptions. IHL made the decision in response to President Joe Biden’s executive order that requires vaccination for employees of federal contract and grant recipients.

One board member, Teresa Hubbard, attempted to postpone a vote on today’s motion, saying members had not had time to read or “process” it. She argued that it may override some loopholes in Biden’s order that could have theoretically allowed exemptions for university employees who do not work directly in relation to federal contracts or who do not work in a building with anyone who does.

“That goes completely 180 degrees away from our position just last month. … I think it’s going to affect our universities very negatively for those who may not need to require it for every individual at their schools—and it does exclude students—to have the vaccine,” said Hubbard, whom Gov. Tate Reeves appointed to the IHL board earlier this year.

The board, Hubbard said, should have simply instructed universities to follow Biden’s federal vaccine mandates and allow them to each determine its meaning for themselves. Others on the board said that the motion would simplify the issue for the state’s universities and, as the motion itself says, help avoid “the risk of an institution making an inconsistent determination.”

“We have a federal mandate that says if you want federal money, you have to be vaccinated. If you don’t want federal grants, it’s fine. If you all want to come up with $271 million, its ok, you don’t have to worry about it,” said Dr. Alfred McNair, an IHL board member and gastroenterologist. He and another physician on the board were the only members to vote in favor of mandating vaccines for faculty and students when the board first considered the issue in August.

The board voted 9-to-3 in favor of the vaccine mandate this afternoon. Those opposed were Hubbard, the CEO of a truck manufacturing company; Jeanne Luckey, an appointee of former Gov. Phil Bryant who has held multiple leadership roles in state and national Republican Party politics; and Gregory Rader, a Reeves appointee and the executive chairman of the Columbus Recycling Corporation. McNair and the other physician on the board, Dr. Steven Cunningham, both voted in favor of today’s motion.

Under Biden’s order, university employees at campuses with federal contracts must show proof that they are fully vaccinated or receive an exemption accommodation by Dec. 8. To be compliant by that deadline, university faculty must receive either a first Moderna shot by at Oct. 27; a first Pfizer dose by Nov. 3; or the less effective, more difficult to obtain one-shot Johnson and Johnson vaccine by Nov. 24.

The president first issued the executive order on Sept. 9, but IHL’s motion today said that it “does not support the federally imposed COVID-19 mandate” and “chose to wait for further and more definitive federal clarification before considering revisions to the prior board direction.” That clarification, the motion says, came 31 days ago on Sept. 24 after the Safe Federal Workforce Task Force issued new guidance, but IHL did not address the issue until today.

That means that university employees who wish to receive the most effective and readily available vaccines have only nine days to begin the process for the Pfizer vaccine and just two days for the Moderna vaccine. Biden’s executive allows vaccine exemptions only for medical reasons, disability and for “sincerely held” religious beliefs regarding vaccines.

Since August, the faculty senates at the state’s three largest universities have all passed resolutions in favor of vaccine mandates for employees and students. Earlier this month, the University of Southern Mississippi Faculty Senate voted on a resolution that called on IHL to rescind its prohibition on vaccine mandates for students and employees.

After this story published, IHL announced the motion’s passage in a press statement this afternoon, noting that there are 120 federal contracts valued at $271 million among the state’s eight public universities.

“While the Board of Trustees recently passed a motion prohibiting requiring the COVID-19 vaccine as a condition of employment or enrollment, federal law and regulations supersede Board policy,” said IHL Board of Trustees President Dr. J. Walt Starr, who voted in favor of today’s motion.

“We are forced to comply with federal executive order or risk losing access to federal contracts, which play a significant role in furthering the research mission at our universities. While the Board prefers to allow individuals to make their own decisions about their health-related issues, President Biden’s Executive Order effectively ties our hands.”