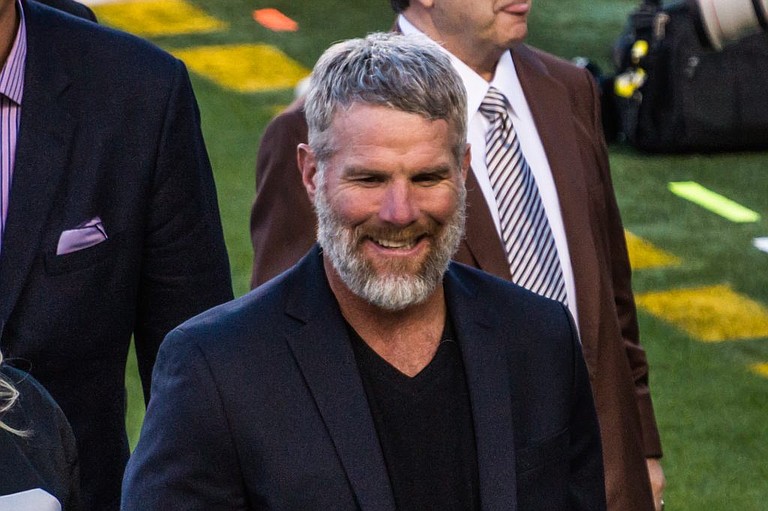 NFL star Brett Favre must return $828,000 he received from welfare funds that should have gone to needy families, Mississippi State Auditor Shad White said in a statement recently. The famed quarterback and Mississippi native received $1.1 million in funds from two non-profits whose founder has since been indicted on state and federal charges for their alleged role in the largest embezzlement scheme in state history.

White said Favre accepted the money for speaking engagements that he never attended for Families First For Mississippi, one of the non-profits involved in the alleged scheme. The football star has said he did not know the funds were illegal when he accepted them.

In a letter to Brett Favre, Mississippi State Auditor Shad White said the “illegal expenditures and unlawful dispositions were made when you knew or had reason to know through the exercise of reasonable diligence that the expenditures were illegal and/or the dispositions were unlawful.” Photo courtesy Auditor White

Months after news of the scandal first broke last year, the auditor announced in May 2020 that Favre had returned a portion of the funds. White said he believed at the time that Favre was acting in “good faith” and that he had “seen no records indicating Mr. Favre knew that (Temporary Assistance for Needy Families) was the program that served as the source of the money he was paid.”

In a statement today, however, White said the recipients of the misspent TANF funds, including Favre and Favre Enterprises, must repay the money within 30 days or face a civil lawsuit. This afternoon, Mississippi Today’s Anna Wolfe reported that the letter Favre received from White said the “illegal expenditures and unlawful dispositions were made when you knew or had reason to know through the exercise of reasonable diligence that the expenditures were illegal and/or the dispositions were unlawful.” Wolfe was the first to report on Favre’s involvement in early 2020.

Today, White cited the completion of a federal forensic audit of the Mississippi Department of Human Services as the impetus for the demand letters. MDHS’s former executive director, John Davis, is awaiting trial on embezzlement charges.

“Now that (the federal audit is) complete, we are in a position to demand the illegally spent welfare funds be returned to the state,” White said today.

Others who received letters from the auditor today include:

The Republican auditor also issued a demand to Davis, the former DHS director, for $96.3 million, including interest, “for his role authorizing over $77 million in illegal TANF spending.” White also sent a demand for $378,791 to Davis’ nephew, Austin Smith, and one for $674,715 to JTS Enterprises and Transformational Ventures. Davis’ brother-in-law, Brian Jeff Smith, controls JTS Enterprises.

“Two nonprofits, the Mississippi Community Education Center (MCEC) and the Family Resource Center (FRC), either misspent or improperly dispersed portions of that $77 million, meaning the money was ultimately misspent by a vendor to the nonprofit,” the auditor’s statement today reads. “As a result, the board and leadership of MCEC were served with a demand for $68.159 million. FRC’s board and leadership were served with a demand for $15.549 million.”

Former Mississippi Gov. Phil Bryant had close ties to Nancy New and he celebrated the launch of Families First For Mississippi with her in 2016. The News have given thousands to Republican campaigns in Mississippi, including to current Gov. Tate Reeves. In 2019, Reeves’ campaign filmed a campaign ad at the News’ private school in Jackson, New Summit, touting his support for public education. He has since returned their donations and renounced the mother-son duo. Neither White nor prosecutors have alleged that the current or former governor were involved in the scheme.

In March, federal prosecutors indicted the News on additional charges, alleging that Nancy and Zachary New “conspired” to “fraudulently” obtain more than $2 million in public education funds and used it to pay for teachers’ salaries at New Summit School in Jackson. The News’ schools have been among the top recipients of legal public education funds under a private school voucher program that Reeves, as lieutenant governor and Senate president, helped create and which Bryant signed into law.

The News, Davis and DHS employee Latimer Smith pleaded not guilty last year to state charges over the DHS scandal. Brett DiBiase accepted a plea agreement last year and pleaded guilty to making false statements in front of a Hinds County judge. In exchange for becoming a witness in the case, prosecutors withdrew a conspiracy charge against him.

The only other person charged in the scandal is Anne McGrew, Nancy New’s former accountant at the Mississippi Community Education Center. On Monday, McGrew pleaded guilty as part of a plea deal in exchange for testimony against others involved in the scheme, including Nancy New.

In his statement today, White noted that the demands for repayment issued today “are civil in nature, not criminal” and that it is up to Mississippi Attorney General Lynn Fitch to enforce them in court if repayment is not made within 30 days.

“I’m grateful that DHS’s Director Bob Anderson has worked with the Attorney General’s Office to hire an attorney to recover these funds,” White said. “These demands serve as the next step in the recovery process. If there is more money that the Attorney General believes has been misspent than what we have identified in these demands, we stand ready to help them investigate if needed. More demands are possible.”

Correction: An earlier version of this story conflated the amount that Auditor Shad White said Ted DiBiase Sr., and his son, Ted DiBiase Jr., owe. Also, Nancy New was the founding director of two non-profits involved in the DHS scandal, not their “owner.” She was, however, the owner of a private school in Jackson mentioned elsewhere in the story. We apologize for these errors.