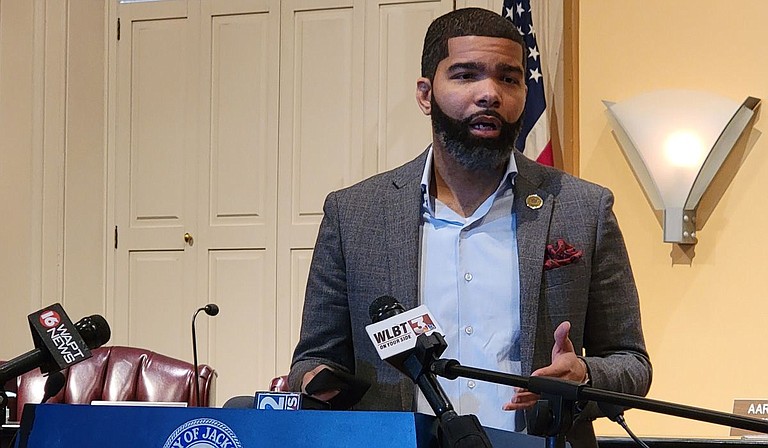 Mayor Chokwe A. Lumumba, at a press briefing on Monday, Oct. 11, praised his late mother, Nubia, for having the courage to leave an abusive relationship. Photo by Nick Judin

Mayor Chokwe A. Lumumba shared a personal story of domestic violence at a press briefing on Monday, Oct. 11, as he proclaimed October as Domestic Violence Awareness Month in the city of Jackson.

"I am the product of a woman who was bold enough to leave a domestic-violence relationship," he said. "Had my mother not left her first husband, who was violent to her, she would never have met my father, and I would never have been born," he said. "And so I'm grateful that she had the courage, and I understand that the conditions and the circumstances that women face in violent circumstances are unique—there is no cookie-cutter representation of what that looks like—(and that) the circumstances that hold people in domestic-violence relationships are unique as well."

"And so before we rush to judgment, we should rush to be supportive and do all that we can to eradicate this from our communities," he added.

"One in three women will suffer at the hands of the various forms of domestic violence—one in three. That alone should represent just how pervasive of a problem this is and how serious we must be in addressing it," the mayor said.

The proclamation indicated that domestic violence is the leading cause of injury to women across the nation.

"And it's an issue of increasing concern because of negative effects on all family members, in particular—children,” policy advisor Ashley McLaughlin read at the presser. "These heinous acts are not confined to socioeconomic, ethnic, religious, racial, gender or age groups. Consequently, it knows no educational or geographical bounds."

"Whereas, devastatingly, more than one in three women have experienced rape, physical violence, stalking by an intimate partner during their lifetime, and American women are more likely to be injured, assaulted, raped, or killed by a male partner," McLaughlin added. "Sadly, victims suffer in silence because of current culture and enforcement practices that heighten their fear that they will not be believed or turned away."

The mayor also proclaimed the month of October as Breast Cancer Awareness Month on Monday. The American Cancer Society began the initiative in 1985 and promoted mammograms as "an effective weapon (against breast cancer)," the proclamation said.

"Each and every year, we want to make it clear that the city of Jackson stands strong in the fight against breast cancer that it is a disease that is far too pervasive, not only in our community but in many communities around our state, in our nation," the mayor said.