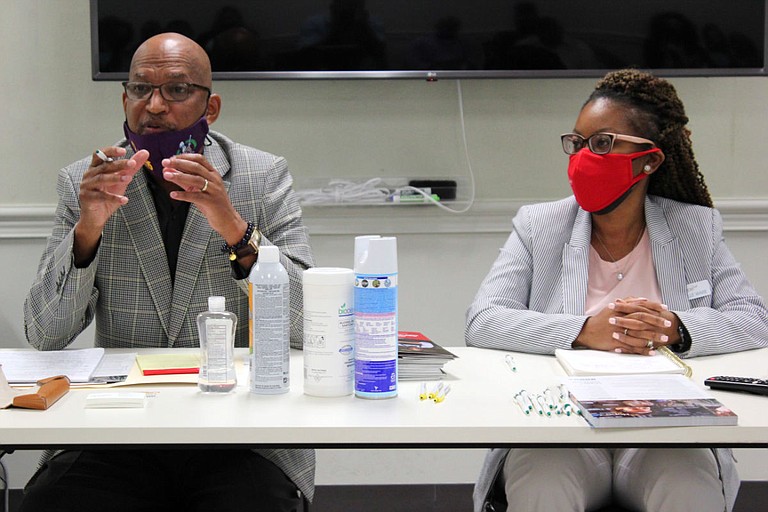 The Black entrepreneurs run various businesses: a cleaning agency, a logistic and trucking company, a real-estate development agency, a health-care consultancy, a physical-therapist firm, a counseling firm, and ventures in podcasting, art, photography and catering. They all want to grow, individually and as a strong Black business community in Mississippi.

Mississippi Black Pages, a statewide platform for Black entrepreneurs to connect for exposure and development, organized the event as part of their monthly series tagged “Network your Net Worth Professional Mixer.”

Ware and Rawls told them it is important to develop relationships with community-development financial institutions like the one they represent and shared keys to successful lending relationships to increase business capital.

The participants listened raptly to the 20-minute presentation as they learned how to access capital for business expansion and later got their questions answered.

Latysha R. Murry , who owns Da Creator’s Image LLC, a three-part business focusing on beauty, health and inspiration, was at the event. She later told the Mississippi Free Press that the information she got from the event helped her focus on the importance of drawing up a business plan and working with tax preparers and CPAs to prepare financial records.

“I learned that businesses have to have a financial record, a tax preparer, a CPA, to be in a relationship with bankers, not to be afraid to ask questions or even try to walk into a bank with confidence and say, ‘Hey, I need help with my business. Can you help me?'”

Hope Credit Union is part of a coalition of black-led Community Development Financial Institutions, prioritizing capital to Black-owned businesses. In 2016, the organization joined others to start the Expanding Black Business Credit Initiative, which last month launched the Black Vision Fund to increase the available funding to seven minority-focused financial institutions that are parts of the Expanding Black Business Credit initiative.

“The fund will lend long-term funds to seven successful Black-focused/led Community Development Financial Institutions (CDFIs), so they can make loans to Black-owned businesses. Its ultimate goal is to reduce the racial wealth gap that plagues the Black community,” an Aug. 24 EBBC press release announcing the launch of the fund said.

The David and Lucile Packard Foundation, Ceniarth, Amalgamated Bank and Local Initiatives Support Corporation (LISC) made investments in the fund.

The $24.5 million that the seven benefiting organizations share will increase funding options for people like Murry. That amount is the first tranche of capital with $80 million as the target.

Hope Credit Union CEO Bill Bynum and Prosperity Now President and CEO Gary Cunningham, both members of EBBC, jointly spoke with Mississippi Free Press via conference call on Sept. 24. They said that the Black Vision Fund provides more funds to Black-led, Black-focused CDFIs with a proven track record of lending to Black businesses to close the gap in credit access for Black businesses.

“There was data that showed that the Small Business Administration’s 7(a) loan guaranty program, which is the primary source of capital for underserved businesses in the country, had huge disparity when it came to access for Black businesses,” Bynum said. “On the other hand, the CDFIs that were part of the Black Vision Fund in the Expanding Black Business Credit network had demonstrated that, with an adequate capital, we could close these gaps.”

“We just had never been adequately capitalized,” he added. “Our policy center did an analysis to show that white CDFIs are two-and-a-half times better capitalized than black CDFIs; they typically historically have gotten smaller grant awards from the Treasury Department CDFI fund.”

In the report, Hope Policy Institute Senior Analyst Kiyadh Burt wrote that the disparities have significant implications for CDFIs’ ability to do their work and grow because asset size is important for acquiring collateral for investments and other funding opportunities.

“This asset gap and what it means for future growth is critically important because minority-led CDFIs serve in communities that are disproportionately vulnerable, which amplifies their need for adequate funding,” he added.

Bynum and Cunningham said that they aim to triple lending to Black businesses through the Black Vision Fund.

In the phone interview, Cunningham said the Black-led CDFIs’ understanding of the cultural milieu facilitates their effectiveness.

The Hope Credit Union officials at the Sept. 17 Mississippi Black Pages event have decades of experience lending money to the African American community.

Vice President Rawls said that the company does not just deploy capital but also provides technical assistance, including crafting business plans and financial statements. He said the company goes out into the community offering help.

“So we’re out in the communities and trying to help folks that generally would not get the help,” he said. “There is a real market for small business loans to be made in our community because, unfortunately, some of the banks aren’t really doing as many as we like, as many as we do, so that gives us an opportunity to really get out, reach out and help the community.”

Prosperity Now CEO Cunningham said the ultimate goal for the Black Vision Fund is to create an economic renaissance in Black communities to grow wealth by building businesses.

“In a recent study, 41% of Black-owned businesses from last year closed their doors, compared to 17% of white-owned businesses,” Cunningham said. “So we know there’s a major issue and that we need to grow black businesses in order to grow economies in black communities.”

Bynum argues that business development among communities of color is a way to close the wealth gap and that Black-focused CDFIs play a pivotal role.

“We’re at a critical moment in this country’s history. We see the division. And a lot of that is the result of opportunity gaps that have been in existence for 400 years that are not sustainable as the country becomes more diverse,” he said.

Bynum said sole proprietors employ many people of color, particularly those who don’t have higher levels of technical skills or have not had opportunities to get a higher education. The 18 businesses represented at the Sept. 17 Mississippi Black Pages event at The Synergy Link are the cross-section of such employers. They learned how to take advantage of the increasing availability of funding through Hope Credit Union and other CDFIs.

“All of the CDFIs that are part of the Black Vision Fund have really been fortunate to take advantage of some of the resources that have been made available the past year and a half as a result of the triple crisis—the social-justice crisis that resulted after George Floyd’s murder the economic crisis that follow the health-care crisis that disproportionately has affected Black and Brown communities,” he said.

“The (Paycheck Protection Program) program drove a lot of capital to small businesses, and the Black Vision Fund members were perfectly positioned to take advantage of that and ensure that Black communities were not left behind.”

Bynum said Hope Credit Union received $100 million in transformational deposits, in the past year. Without such deposits, the bank would have to borrow money from the market, with attendant high-interest rates, increasing lending costs. With two-thirds of its members having less than $1,000 in deposits, the bank had to look to outside sources to meet loan demands. The company calculates that the $100 million translates to a $2 million yearly reduction in operating costs.

“These deposits (are) not just from Netflix and PayPal and Nike—which have been great—but we’ve had hundreds of individuals and nonprofit organizations and small businesses that recognize that it’s critical that the wealth gaps, opportunity gaps are closed, and they know that we just do not have the capital in Black communities to adequately respond to these needs,” Bynum said in the interview.

Bynum said that the capital inflow has enabled an increase in capitalization, which translates into a substantial investment increase in the Black communities.

“None of us are fully adequately capitalized,” he said. “And so we’re constantly looking to make sure to cobble together resources to address the needs of our communities.”

National Community Investment Fund President and CEO Saurabh Narain, an EBBC member, wrote an opinion piece in the American Banker on Aug. 16, asking Black-owned banks to seize the recent opportunity by increasing total assets by a factor of 10.

“Both the public sector (via the Emergency Capital Injection Program and CDFI Fund) and the private sector are investing new capital and committing other support to these institutions—in billions, rather than millions, of dollars,” he wrote.

Narain encouraged investment in human capital and physical infrastructure and for the Black-owned CDFIs to become more investor-friendly and pursue relevant partnerships to remake their business models.

“(Now) there is before us a truly once-in-a-lifetime opportunity to bring together enough human, infrastructure, and financial capital from the government, philanthropies, the tech sector, individual donors, and other sources to create unprecedented hope and opportunity for low- and moderate-income communities across rural and urban America,” he added.