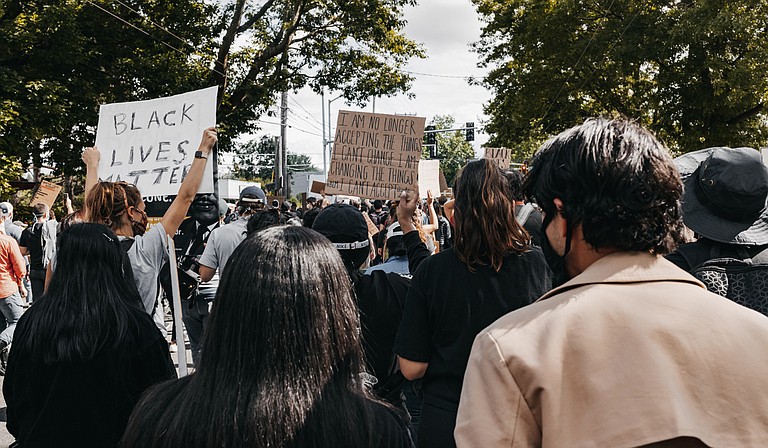 Activists with Black Lives Matter Mississippi are calling for the release of police body camera footage of what happened May 3 near Biloxi. Investigators won't say whether any officers were wearing body cameras at the time. Photo courtesy Duncan Shaffer on Unsplash

JACKSON, Miss. (AP) — Officials have not yet said who is responsible for the shot that killed a 3-month-old baby when his father died in a shootout with police on a highway last week in Mississippi.

Activists with Black Lives Matter Mississippi are calling for the release of police body camera footage of what happened May 3 near Biloxi. Investigators won't say whether any officers were wearing body cameras at the time.

A group gathered Sunday by Interstate 10, near the site of the shooting, to pay tribute to the life of infant La’Mello Parker and two people who were killed earlier May 3. Authorities said Christin Parker, 32, and her nephew Brandon Parker, 26, were killed by La'Mello's father, Eric Derrell Smith, in a domestic dispute, leading to the police chase and standoff in which Smith and the baby were killed.

“We want to have a coherent, truthful conversation about what happened and how this could have been avoided. Period,” Anastassia Doctor, a Black Lives Matter Mississippi board member and Army veteran, told The Associated Press Monday. “If this was a white man with a white child, would they have done the same thing?”

Smith, 30, was suspected of killing his ex-girlfriend, Christin, and her nephew at a home in Baker, Louisiana, on May 3. Smith then kidnapped La'Mello and left the scene, according to investigators.

In a Facebook post on May 3, the sheriff's office from East Baton Rouge Parish, Louisiana, alerted the public to be on the lookout for Smith.

Before Smith and La'Mello were killed, Smith led police on a chase across state lines. The pursuit was joined by more than a dozen officers from the Mississippi Highway Patrol, Gulfport Police Department and the Harrison County Sheriff’s Department.

A video taken by a bystander shows the final barrage of gunfire after more than a dozen law enforcement vehicles pursued Smith’s car. Police told WLOX-TV that both Smith and officers fired weapons.

An autopsy determined that La’Mello Parker died of a single gunshot wound. The coroner of Harrison County, Mississippi — Brian Switzer — told The Associated Press last week that Biloxi police investigators would examine the bullet to try to determine the source of the fatal shot.

Switzer said a pathologist will determine whether the fatal shot came from close range or a distance.

Biloxi police are investigating because none of that department’s officers were involved. Biloxi Police Major Chris DeBack said Monday that he had no other details to release while the matter is still under investigation — including whether any officers were wearing body cameras at the time of the incident.

“As soon as the investigation is completed, all the information will be forwarded to the district attorney’s office for further review,” DeBack said.

Family and friends of Christin Parker said that Smith had a history of domestic violence, and that she feared for her and her children's lives daily.

“She got to a point where she just didn’t know what to do," friend Johnnie Williams told WAFB-TV. “A lot of people say, ‘Get a restraining order,’ stuff like that. They know that don’t stop them.”

Christin Parker leaves four children, including one who was home when the shooting occurred. Her family's wish is that the loss will encourage more conversations about domestic violence, WAFB reported.

“Get help now so this situation won’t become your situation,” Pastor Robert Scott, a family friend, said. "Walmart lost a great worker. The community lost a sweet and loving young lady. The children ... lost a parent that loved them dearly.”

Reginald Virgil, who was at the vigil Sunday, questioned why officers from multiple departments couldn't de-escalate the situation without using deadly force.

“Knowing that there was an infant in the vehicle, where were their hearts?" he told the AP. "Where is the empathy? Where is the concern for the Black lives that were in that vehicle? A total disregard for Black lives.”

Sean Hendrickson, an instructor at Washington State’s Criminal Justice Training Center, said the situation is a difficult one for officers, who have to make quick decisions for the public's safety.

By law, police are allowed to pursue a suspect and use deadly force if they have “reasonable suspicion” that person has committed a violent crime and they are an imminent threat to the public.

“There’s no amount of training that we can give where you’re now balancing your own life, where you're being shot at and then not returning fire because there’s an innocent person in the vicinity or even in the vehicle,” he told the AP. “I know that’s not much of an answer, it's just there's is just no amount of training I think that we can do that gives you this answer, like the binary code, to 'go do this.’"