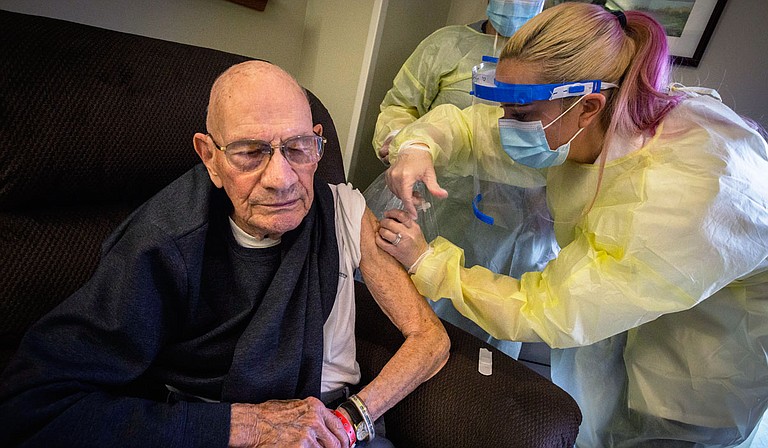 Thirty percent of Mississippians age 70 and up have received their first vaccine dose, while 20% of those 60 and older have been vaccinated. Photo by New Jersey Department of Military and Veterans Affairs Photo by Mark C. Olsen

Two more Mississippi lawmakers were diagnosed with COVID-19 this week, raising the tally to four from the two reported last week. Lt. Gov. Delbert Hosemann announced the additional cases in a Jan. 28 press event, explaining that the infected legislators are currently in isolation.

Dozens of state legislators have contracted the virus over the course of the pandemic, including Hosemann and House Speaker Philip Gunn. In a social-distancing effort, legislators may use Zoom to attend meetings instead of appearing in person—a compromise for Hosemann, who wished to delay the session entirely.

Gov. Tate Reeves took to Twitter this morning to announce availability for 15,000 new first-dose appointments. “Schedule now, because I am sure they will be booked quickly,” Reeves said. In a Feb. 28 press briefing, Reeves also announced that second-dose appointments are now available.

Anyone receiving their first vaccine dose will be scheduled that same day for their second dose. Those who have already received their first dose can now schedule their second dose online here. Second-dose appointments are currently available for the week of Feb. 1 and Feb 8.

Total vaccinations this week are projected to be lower than the average of 60,000 from previous weeks due to the low number of first-dose patients in December. Reeves hopes to increase vaccination rates as more Mississippians become eligible. “My goal in the month of February is to have the ability to do approximately 100,000 vaccines a week,” he said.

Today, the Mississippi State Department of Health reported 2,186 new cases of COVID-19 and 38 deaths. On average, however, State Epidemiologist Paul Byers noted a possible light at the end of the tunnel.

“It hasn’t been dramatic, but we are seeing some indicators that are showing over time we are plateauing and leveling off and in some cases dropping down in the number of cases and in the number of deaths,” he said.

Byers indicated that caution is still warranted, as current numbers still top those of the highest spike seen during the summer of 2020. Byers said 20% of the state’s population aged 60 and older have now been vaccinated, while at least 30% of those 70 and older have received their first doses.

At his Jan. 28 press conference, the governor announced that Mississippi Emergency Management Agency Executive Director Greg Michel is retiring from his post. “We’re all sorry to see him move on, but we’re incredibly grateful for his service,” Reeves said.

The governor signed a proclamation honoring Michel’s tenure in overseeing 21 federally declared disasters, before introducing his successor. “This state comes together in bad times, and I’m very honored to have served the state, not only in the position but particularly in this last year,” Michel said.

Taking over is Lt. Col. Stephen McCraney, a 28-year veteran of the National Guard who since 2016 has served as MEMA’s deputy director. Now-Director McCraney’s career has spanned numerous disasters over the years, from involvement in handling the aftermath of Hurricane Katrina to the Deepwater Horizon oil spill. “The bar has been set high by my predecessor,” McCraney said. “He has a big set of shoes to fill, but there’s only one way to do that, and that’s through the staff and the personnel at MEMA.”