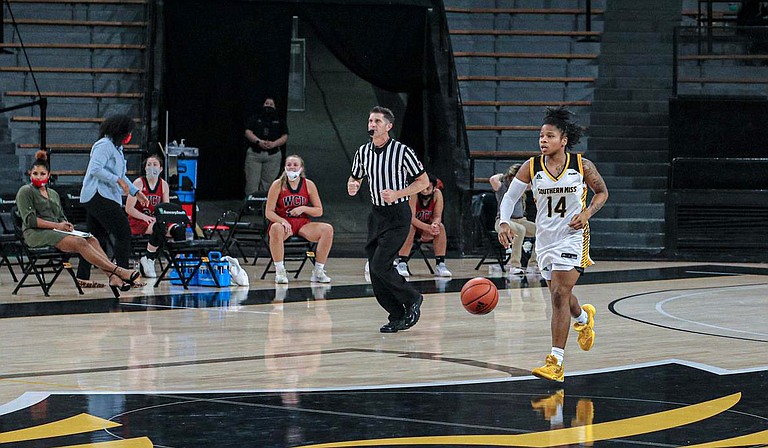 Conference didn’t start out well for the University of Southern Mississippi women’s basketball team. The team began Conference USA play with five straight losses and that dug a deep hole for the squad.

The Golden Eagles earned the first conference win against Middle Tennessee State University on Saturday, Jan. 16. USM hoped to get on a winning streak against the University of Texas at San Antonio. Both teams were set to play two games in two days due to the conference’s COVID-19 scheduling.

Good news for Southern Miss is that freshman Kahia Warmsley returned to the starting lineup. Warmsley has played in seven games and started four games this season for the 5-5 Golden Eagles.

Warmsley was one of three players to score double digits in the first of two contests. As a team the Golden Eagles scored a season high 88 points in the victory.

In the second game against the Roadrunners, Warmsley exploded for a career-high 25 points. She shot 10-of-15 from the field and went 3-for-3 from the three point line. Warmsley packed the stat sheet as she collected four rebounds, three steals, and one assist.

Warmsley earned C-USA Freshman of the Week for her career high setting games. This is the first time for Warmsley to earn the honor. It is the third time a Golden Eagle has been named the conference’s freshman of the week with Melyia Grayson earned the honor twice.

This season, Warmsley is averaging 8.7 points, 2.4 rebounds, 1.9 assists and one steal per game. She is third on the team in scoring with Grayson leading the team and Kelsey Jones in second in scoring.

At 3-5 in conference play USM is running out of time to climb up the conference standings. The Golden Eagles are currently fifth in the seven team west division with 10 C-USA games left to play.

Southern Miss plays back to back games against Louisiana Tech University on Thursday, Jan. 28 and Saturday, Jan. 30. The Bulldogs are 4-4 in conference play one spot ahead of USM.

The biggest test for USM comes in their next two game series against Rice University. The Owls lead the rest currently at 6-0 in C-USA play. USM plays Rice on Friday, Feb. 5, and Saturday, Feb. 6.