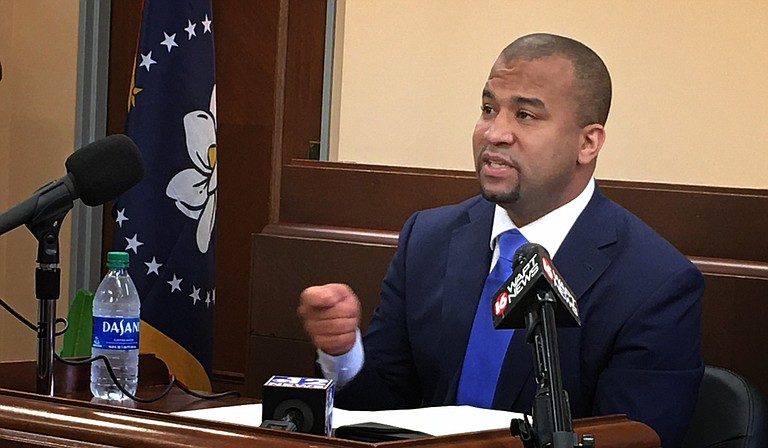 Hinds County District Attorney Jody Owens told the media on Jan. 26 that 300 first-time non-violent offenders have gone through a diversion program in the last year in exchange for dropped charges. Photo by Kayode Crown

"So while we are indicting individuals who commit crimes, in addition, we are also living true to our values of ensuring that everyone does not need to be in the criminal-justice system," he said as he presented his office's year 2020 review after one year as district attorney.

"In my former career as a civil-rights lawyer, we found that once people touch the system, it's almost impossible for them to break free of the stigma associated with a felony conviction," Owens explained. "(We) identify, whenever possible, non-violent offenders who are facing a felony conviction to give them what's called our diversion program."

"If they can adhere to that program for a year or up to three years depending on the severity or the number of charges, then their charges will be dismissed."

The district attorney said the program has been "helpful so far" and that Hinds County is doing its part to reduce the Mississippi prison population.

"I think that since Hinds County is one of the largest counties in Mississippi, we have to do our part to keep as many people out because that truly is a component of public safety," he said. "Because if we can keep people working, we can keep people in school, all of them (living) productive lives, that will make us as safe as incarceration."

He explained that his office ensures that people do not remain in jail just because they can't pay the bond.

"[T]he people who need to be incarcerated pending trial are the individuals who have been deemed to be a threat to our community and not individuals because they can't make bond. And we don't want to run (a) prison (with) that metric; we just don't want to do that."

Owens said non-violent criminals are mostly not retained in the Raymond Detention Center to lessen the prison population during the COVID-19 pandemic. More than 85% of those in jail are for violent crimes, Owens said.

"What's important to know is that during COVID, we had the safety challenge of ensuring that individuals who were in that jail in Raymond were individuals who had committed violent offenses and were not eligible for bond," he said. "We worked to reduce that (jail) population by 25%, but all violent offenders stayed there."

He said that efforts to reduce the jail population also include dealing with the cases involving those who have been there longest, with the Hinds County Sheriff's Office providing weekly and monthly lists.

"We have an individual that right now that we're trying to get out, who's been there for a couple of years now," he said. "The lawyers have to help us out on the other side as well, but we certainly are prioritizing trying those (long-standing) cases and also resolving those cases whenever possible."

Owens emphasized that the pandemic seriously challenged the criminal-justice system in 2020.

"We saw the largest murder rate in Hinds County in recent memory, we saw skyrocket numbers of domestic violence, and also crime, like in Mississippi, rose throughout the nation," he said.

"[I]'m proud to report (that) in 2020, we indicted 1,422 individuals who have committed 2083 separate crimes; 579 of the 1,422 indictments contained one or more charges that were violent crimes; 843 of those indictments were non-violent offenses."

Owens said his office now gets indictments within 60 to 90 days of getting a case and plans to go from "commission to conviction" in one year in 2021. This is a dramatic decrease in traditional turnaround times in the Hinds County system.

Slowed Down By Need For Mental Evaluation, State Crime Lab

The district attorney said the backlog of cases is also partially due to evaluations that the Mississippi Department of Mental Health should do for some inmates.

Owens said the backlog of reports they need to get from the Mississippi State Crime Lab slows the pace of adjudications even as his office deals with "2000 active cases."

"Before last year, we had 88 autopsies that were outstanding before the Mississippi state crime lab," he said. "And, you know, we had 137 murders in our county last year, so, if you do that together, that's just a backlog on getting those things done."

"The challenge has been that we have had some turnover (at the state crime lab) and some restrictions there, and I can't speak to that, but I can tell you that it's a serious problem," he added. "We've (internally) priced (the) cost of doing outside autopsies before this year; we looked at almost [a] million dollars to get the ones we had outstanding."

"I think that actually might be the most significant issue on getting prosecution of cases for the remainder of my term."

"But we are still making (plea) offers," he said. "We think that if there is video footage that shows and that you shot somebody, that's sufficient.”

"I guess, half of (cases with awaited autopsy results), we think the evidence is sufficient, we already know, the individuals already acknowledged that he or she shot the individual; alternatively there's video footage or eye witness testimony."