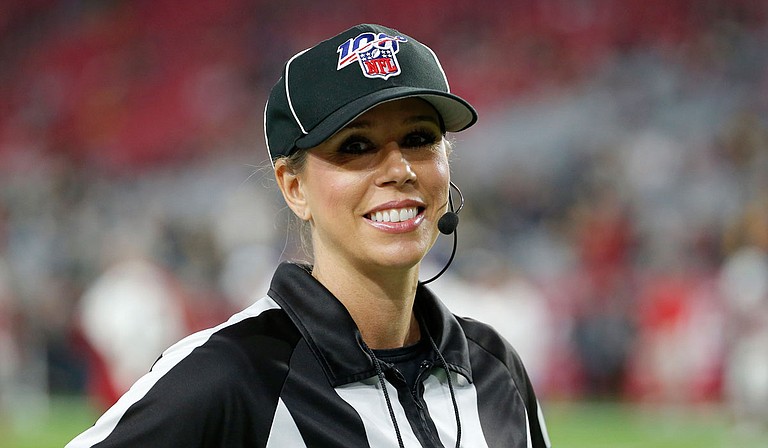 Photo by Rick Scuteri via AP

Somehow the NFL made it through the regular season without having to cancel any games due to COVID-19. The league has played two rounds of the playoffs and just four teams remain in the running to play in Super Bowl LV.

On Sunday, Jan. 24, the defending champions Kansas City Chiefs will host the Buffalo Bills and the Green Bay Packers will host the Tampa Bay Buccaneers. The winner of those games will meet in next month’s Super Bowl.

This week the NFL announced the seven-person crew that will work the field on Sunday, Feb. 7, at Raymond James Stadium in Tampa, Fla. Our state will have a connection to the game no matter which teams win this Sunday.

Mississippi native Sarah Thomas will be the down judge and thus become the first woman to work a Super Bowl in NFL history. League rules state that an official must work five years before being selected to work a Super Bowl. Thomas is in her sixth year as a NFL official.

NFL executive vice president of football operations Troy Vincent said in a statement: “SarahThomas has made history again as the first female Super Bowl official. Her elite performance and commitment to excellence has earned her the right to officiate the Super Bowl.”

The Pascagoula native and current Brandon, Miss., resident earned the honor of being the first female on the field official in 2015 and has since worked four playoff games, including what could be Drew Brees’ final games as she worked the New Orleans Saints against Tampa Bay game.

She soon became a college official working for Conference USA. That is the same conference that the University of Southern Mississippi is a member.

Shortly after becoming an official at the Football Bowl Subdivision, Thomas became the first woman to officiate a bowl game. The trailblazer kept training in the summer in New Orleans, La., with weekly officiating sessions.

Thomas joined the NFL’s developmental program in 2013 and 2014. Now 22 years after she began her career as an official, she is working the Super Bowl.