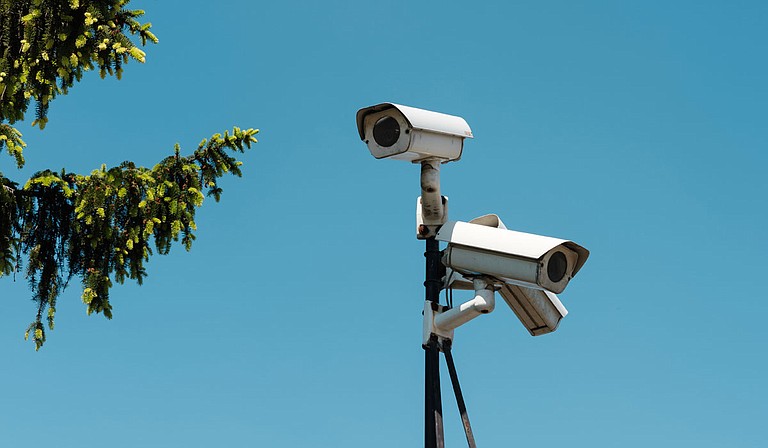 In recent months, Mayor Chokwe Lumumba proposed and the Jackson City Council approved a 45-day pilot surveillance program that will enlist tech companies to tap into the Ring surveillance camera footage of 10 homes and businesses who are collaborating with the expansion of Jackson's surveillance state. The Jackson Police Department's, or JPD's, Real Time Crime Center can access the Ring camera footage at all times as everyday citizens casually go about their daily routines.

JPD's Real Time Crime Center is a surveillance hub with feeds from cameras installed during Lumumba's tenure for what he calls "virtual policing." Virtual policing means that 365 days a year, 24 hours a day, an all-seeing eye will be fixed on Jackson's majority poor and working-class residents. Like the surveillance cameras Lumumba boasted about placing in communities in south Jackson mainly comprised of the working class and unemployed, this Ring surveillance pilot program will not be aimed at capturing the crimes of more affluent residents in northeast Jackson.

The "radical" mayor has made it incandescently clear that he does not think anything is wrong with surveilling Jackson's 80%-plus Black population whom he calls "our people." "[V]irtual policing is no more intrusive than the world we already live in. ... Everywhere you go there is a camera pointing at you from some private entity or gas station or something else."

A business owner using surveillance cameras to monitor the activities within a given vicinity is much different than the state monitoring unsuspecting citizens going about their daily lives. There is overlap between the interests of individual capitalists employing surveillance and the state doing so because both have an interest in protecting private property. But history has shown that the state also has an interest in tracking the activities of citizens in an effort to snuff out any emerging organizing activity before it can gain momentum to upset the status quo.

Edward Snowden, Chelsea Manning, Terry Albury and Jeffrey Sterling all have revealed to the public that police state surveillance is not as benign as Mayor Lumumba would have us believe. They all have paid the hefty price of torture, imprisonment and being labeled enemies of the state. Mayor Lumumba is a part of the Center for American Progress' Mayors for Smart Crime Initiative, an initiative that appears to think it is a genius idea to subordinate the multitudes more efficiently through police-state surveillance. Lumumba surveils Black people while talking about the FBI's COINTELPRO. Is this what Mayor Lumumba meant by making Jackson the most radical city on the planet?

The Lumumba regime is faced with a crisis of legitimacy on the question of crime and violence in Jackson. As the number of homicides increase in the city, and his 2021 re-election bid looms, he and his advisers are scrambling to make it appear that they can solve a problem that the very nature of the state perpetuates. The actions of the Lumumba regime continues to expose the fact that ordinary people have no representation in hierarchical government. The Lumumba administration serves the interests of capital and is on the side of the permanent slaughter. Any pretense of Black radicalism by those who rule above society is mere branding to get the multitudes to place a stamp of approval on their being conquered in the name of Black power.

Rulers entrance people through talk of solving problems that are of legitimate concern for everyday people such as crime and violence. But in the words of the hip-hop artist Cool Breeze, "you better listen to your corner and watch for the hook." The same surveillance gadgetry that rulers say they employ to protect citizens will be the ones they will use to suppress the multitudes when they rise up to throw off the yoke of their oppression.

During the Civil Rights Movement, the State of Mississippi sanctioned the Sovereignty Commission to surveil and suppress the social motion aimed at subverting the white racial state's oppression of Black people in Mississippi. Many prominent figures in the Black community volunteered to be its tools. Today, in Jackson, the Black-led government is at the forefront of making government espionage great again in Mississippi. I know some won't like my saying this, but it's the truth.

Mayor Lumumba is a part of the "new left" that seeks to restore a crumbling American empire through Black faces in high places. He dons African accoutrements as he presides over the police state that surveils, conquers and kills ordinary people in the interest of restoring the legitimacy of the empire of capital.

Expanding the government's capacity to surveil will not address interpersonal violence. Ordinary people determined to arrive on our own authority can accomplish the task of ensuring our collective safety and security. We cannot relinquish our power to elite rulers and blindly trust them to accomplish this task in which they have failed miserably. We must reclaim our power and seize the time.

This column does not necessarily reflect the views of the JFP.