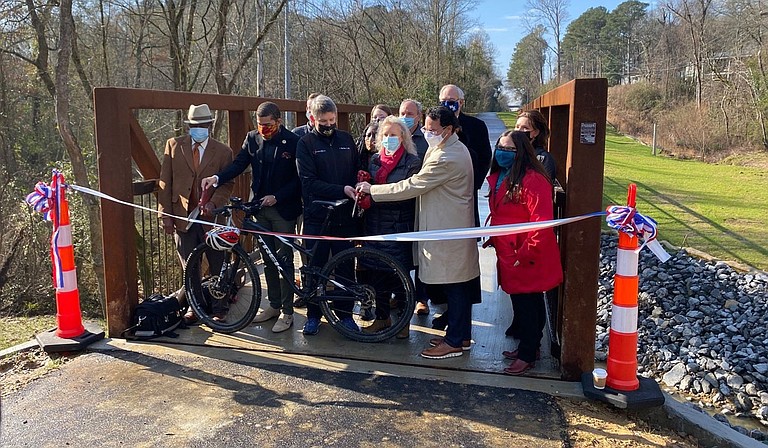 Residents and visitors to Jackson can now enjoy a 2.5-mile Museum trail, for walking, jogging and cycling after a ribbon-cutting ceremony Wednesday signaled the project's completion.

The construction of the track began in July. It links some museums to the Mississippi Farmers Market and connects downtown to Lakeview Avenue.

"Despite facing multiple challenges, including funding, water and sewer line construction, changes in city leadership, frequent revisions to the planning and development, this trail has finally happened," Clay Hays, a past chairman of the Greater Jackson Chamber Partnership, said at the event. "If we're going to have folks that come back into Jackson and into this area, we need projects like this to happen."

Ward 7 Councilwoman Virgi Lindsay said that the Parks and Recreation Department will manage the trail and maintain it. "They're going to take this baby that we've all loved for so long, and they're going to nurture it and love it too and make sure that it remains a beautiful and great place for our city," she said.

Lindsay noted that she was involved with the conception of the project after becoming executive director of Greater Belhaven Neighborhood Foundation in 2001.

"My charge from the (GBNF) board at that time was to take these 38 acres, this huge urban stretch, that was owned by the foundation and develop it, do something with it," the councilwoman said. "Not only did I work in the background with so many people over the years to try to keep this moving forward, but it was very humbling to me when I was able to vote to accept the project and move it forward."

Lindsay was serving as city council president when it voted on Nov. 26, 2019, to spend $1.7 million on the project, covering the construction and supervision costs, and to also receive $450,000 from Jackson Heart Foundation toward it, council minutes show.

"This is a beautiful moment, and this (will bring) economic development," Mayor Chokwe A. Lumumba said of the undertaking. "This will bring people into our city to enjoy this."

David Pharr, an attorney and a longtime supporter of the project, said the Jackson Heart Foundation served as the nonprofit fiscal agent.

"This may be the only transportation project in Mississippi that was funded so significantly by private dollars," he said, and he listed many of the contributors.

"The City was so strapped for cash because of all the infrastructure needs that we're also familiar with (that) we had to agree to raise the matching funds for a potential federal grant in the private sector," he added. "And the initial (federal) grant was $1.1 million; eventually construction materials went up, so we had to fund a bigger gap in the match, and people stepped up at the end."

The 2.5-mile Museum Trail follows the abandoned GM&O Railroad from downtown Jackson through Greater Belhaven and along the eastern border of LeFleur's Bluff State Park, the Greater Jackson Chamber Partnership said in a Facebook post.