City Prepares Shelter for Homeless as Temperature Dips Below Freezing 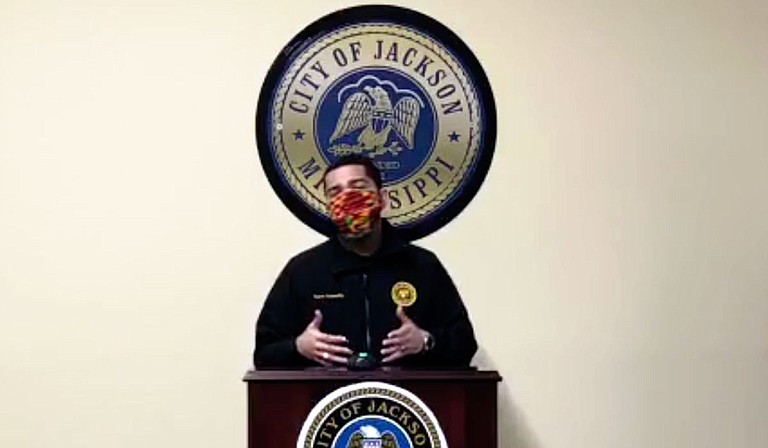 Mayor Chokwe A. Lumumba warned motorists of danger in the roads after a snowfall at a press conference Monday. Photo courtesy City of Jackson

The dip in temperature creates the need to provide shelters for the homeless population in Jackson. Constituent Services Representative Keyshia Sanders said at a media briefing Monday that the City is prepared to open Champion Gymnasium at 1355 Hattiesburg St. as an emergency center for them.

“So as of today, we will not need to open up our emergency shelter, but we will, if we have to open it up tomorrow or for the remainder of the week, we do have that set and ready to go,” she added, “We will always make that notification at 12:30 p.m. the day of, and we will communicate that to the media outlets as well as through our social media outlets.”

Mayor Chokwe A. Lumumba said that the City is preparing to attend to pipe breaks because of the freezing temperature because of winter weather. Citizens should call 311 or 601-960-1111 to report breaks.

"Don't assume that someone else has already called it in," he said. "Often, if you have not informed us of the break, then we are unaware as a city and therefore unable to address the issue."

"As the temperatures drop, we want residents to take every necessary precaution," he added. "When these events take place, we do experience some level of infrastructure failure, whether those are pipes that burst or issues within the home."

"As the snow still appears to be melting, it'll leave the streets damp, and we are anticipating the temperatures will drop again later this evening (Monday) that creates the threat of icing the roads and creating some unsafe travel conditions. The snow flurries, I believe, began late yesterday (Sunday) evening; we've experienced them intermittently throughout the day."

Public Works Director Charles Williams projected that here will be many water main breaks and consequent low water pressure. "Our crews are going to be actively working over the next couple of days to address them," he said. "Let us know, and also to pay attention to any type of red alert throughout the city, as it relates to any type of boiled water notice that may be issued and may be affecting your area."

He cautions drivers against high speed and driving on ice, which can still appear in patches as conditions improve, and said that the department's crews started working at 4 a.m. Monday putting sands on some local bridges to enhance traction. The mayor said that the sand poured on bridges is not foolproof against danger, and there is still the possibility of a loss of vehicular control.

Jackson witnessed the first snowfall of the year between Sunday and Monday.