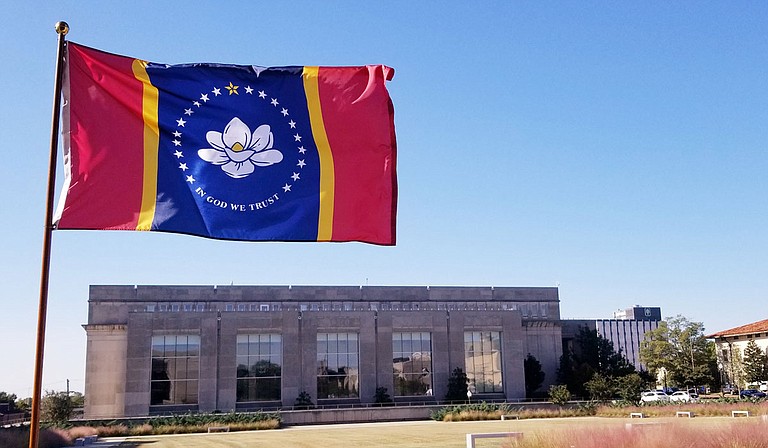 Mississippi legislators are beginning their 2021 session Tuesday and one of their first tasks will be to finish adopting a new state flag that voters approved, with a magnolia blossom and the phrase, “In God We Trust.” Photo courtesy MDAH

JACKSON, Miss. (AP) — Mississippi legislators are beginning their 2021 session Tuesday and one of their first tasks will be to finish adopting a new state flag that voters approved, with a magnolia blossom and the phrase, “In God We Trust.”

Legislators voted in late June to retire the last state flag in the U.S. that included the Confederate battle emblem — a red field topped by a blue X with 13 white stars. The image was in the upper-left corner of the flag Mississippi had used since 1894. Critics had long said the flag failed to represent a state with the highest percentage of Black residents in the nation.

The law retiring the old flag said a commission would design a new one that could not include the Confederate image but that must have the phrase, “In God We Trust," and that the single proposed design would go on the ballot in November. Voters by a wide margin approved a design featuring the phrase and a magnolia blossom. Legislators must now vote to make the flag an official symbol, and that is expected to happen with little fuss.

The magnolia flag has been flying for months at some homes, businesses, universities and at a few public buildings around the state, including Hattiesburg City Hall. It has also been put up in a display of state flags at the U.S. Capitol.

Mississippi legislators are scheduled to be in session until early April, but they are returning to the Capitol as coronavirus cases are surging in the state.

Republican Lt. Gov. Delbert Hosemann said last week that he thinks legislators should handle a few immediate tasks and then leave for several weeks. That would provide time for more people to be vaccinated against COVID-19, and it could prevent the Capitol from having another outbreak. Republican House Speaker Philip Gunn has said legislators should stick to their work schedule.

A few dozen legislators, including Hosemann and Gunn, tested positive for the coronavirus during the summer after working in close proximity. Some in the Capitol at the time ignored public health officials' recommendations to wear masks and keep distance from others.

Republican Gov. Tate Reeves said Monday that he does not have a strong opinion, one way or the other, about whether legislators should stick to their original schedule or leave for a few weeks and return later. Reeves said most people with private-sector jobs have been getting up and going to work throughout the pandemic.

“The legislative calendar is the prerogative of the Legislature,” Reeves said. “That is a decision that they will make themselves.”