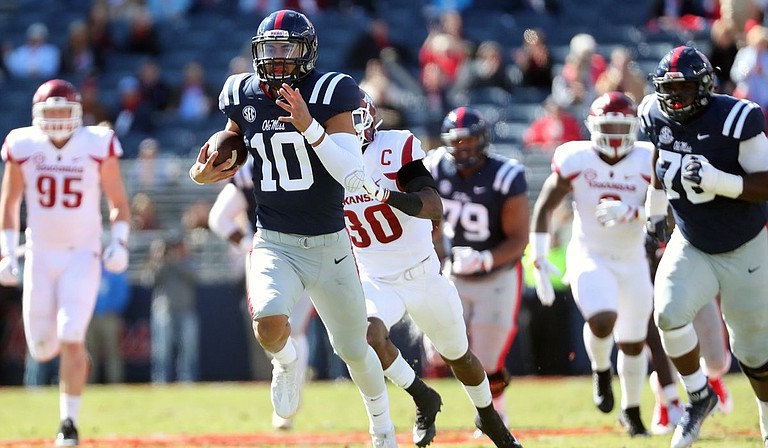 Injuries are a part of sports, especially in the NFL where a career can end on a single play. Those injuries open the door for other players to become starters and in some cases become stars.

Tom Brady and Hall of Famer Kurt Warner took over after injuries. Warner led the St. Louis Rams to two Super Bowls after becoming the starter. Brady is still writing to a Hall of Fame career that includes 10 Super Bowl appearances and seven victories in the big game.

Former University of Mississippi quarterback Jordan Ta’amu is getting another shot at the NFL. Injuries to Detroit Lions backup quarterbacks Tim Boyle and David Blough led the squad to sign Ta’amu.

Ta’amu transferred to UM before the 2017 season and ended up starting in five games. He threw for 1,682 yards and 11 touchdowns and threw for 365 yards or more in his first three starts.

He started the 2018 season where he broke multiple school records as he threw for 3,918 yards with 19 touchdowns. Ta’amu went undrafted in the 2019 NFL Draft but signed with the Houston Texans as an undrafted free agent.

The Pearl City, Hawaii, native didn’t make the Texans squad but did sign with the new reformed XFL. Ta’amu signed with the St. Louis Battlehawks in the spring of 2020, where he played in five games before the league folded in part to COVID-19.

During his short stint with the Battlehawks, Ta’amu threw for 1,050 yards with five touchdowns and two interceptions. He rushed for another 217 yards on the ground.

The next stop for Ta’amu was Kansas City as he signed with the Chiefs in fall of 2020. He ended up on the practice squad before catching COVID-19 and being placed on the COVID list. He would be released shortly afterward.

Ta’amu spent the rest of the 2020 season with the Lions. He would head back to Kansas City after the 2020 season but was released before the start of 2021 training camp.

A short stop with the Washington Football Team ended nearly as quickly as it started. That is how he ended up back in Detroit with another chance with the Lions.

There is little chance Ta’amu will become the starter with Jared Goff firmly the starter for the squad. But it is a chance for him to show his talents for other NFL teams or the Lions themselves.

A good showing could help him land a spot later in the season as injuries mount. Ta’amu just needs to make the most of his current chance.