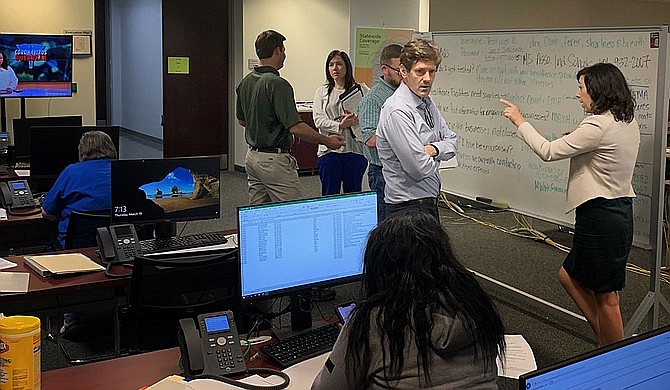 As Mississippi’s fragile control over the coronavirus pandemic crumbles for the third time, State Health Officer Dr. Thomas Dobbs and State Epidemiologist Dr. Paul Byers held a press event on Oct. 16 to discuss what is driving the increased spread.

State Health Officer Dr. Thomas Dobbs is “gravely concerned” about the rapid increase in transmission of COVID-19 across Mississippi, as “small family gatherings” have eliminated the improvement in daily cases, hospitalizations and deaths seen in September.

The Mississippi State Department of Health announced 1,116 cases of COVID-19 on Friday, the second consecutive day of four-digit growth in new cases. The rolling seven-day average is now 766, increasing by more than 50% since Gov. Tate Reeves allowed the statewide mask mandate to expire on Sept. 30. The Mississippi State Department of Health reported 586 cases of COVID-19 over the weekend, a combined count of Saturday and Sunday reports, which have consistently been unrepresentative, as many private labs do not process results during the weekend.

At a virtual press event held Friday afternoon, Dobbs acknowledged that the end of the mask mandate triggered an immediate decline in mask use, one of the key factors pushing the state toward another surge in cases. “Why we would broadly abandon something that is so simple, easy and effective just because there is not an executive order … I’m, frankly, quite disappointed.”

“We are missing a critical piece,” Dobbs continued. “That piece is social distancing and masking.”

In response, Gov. Tate Reeves called for the first coronavirus press event since he lifted the statewide mask mandate on Sep. 30, indicating that new executive orders to curb the spread of COVID-19 were likely coming.

The state health officer also said many Mississippians were beginning to violate the executive order on masking before it ended, and credited parties and family gatherings with driving the spread of the virus. But unlike with the summer wave, elderly Mississippians, not college-aged students appear to be behind the rising tide. “Sixty-five and older is our fastest-growing age group,” Dobbs said. “There are (also) some increases in the 50-to-64 age groups.”

These numbers are especially concerning because they are occurring in demographics at the highest risk of serious complications, hospitalizations and death due to COVID-19. Dobbs confirmed that the expected hospitalizations for the new spike would be at the higher end of the range, imperiling Mississippi’s hospital system if the community spread continues.

Dobbs suggested some form of more aggressive executive action was coming “sometime early next week,” but declined to speculate on what precisely that might be.

Remarkably, Mississippi’s top health official does not seem to have a complete understanding of what the state’s chief executive, Gov. Reeves, plans to do in response to the rapidly deteriorating situation. Though he speaks with the governor regularly, Dobbs is not privy to many of the governor’s final decisions and orders. Often, he admitted, "I learn the details when we sit down at the press conference."

Dobbs expressed deep concerns over the approaching election, especially in the absence of early voting measures and the possibility for unmasked voters to crowd polling locations. He reminded Mississippians that all prospective voters over age 64, as well as those with chronic illnesses, are entitled to a free mask and face shield at any MSDH county testing location from now until Election Day.

On the subject of a mask mandate at polling locations, Dobbs signaled his support for any “allowable,” likely meaning constitutional, rule or mandate that would expand mask usage at the state’s crowded polling places.

The state health officer also asserted that MSDH was ready and willing to provide outdoor mask stations for every polling location in Mississippi, signaling that significant opportunities for preventing outbreaks on Election Day still remain.