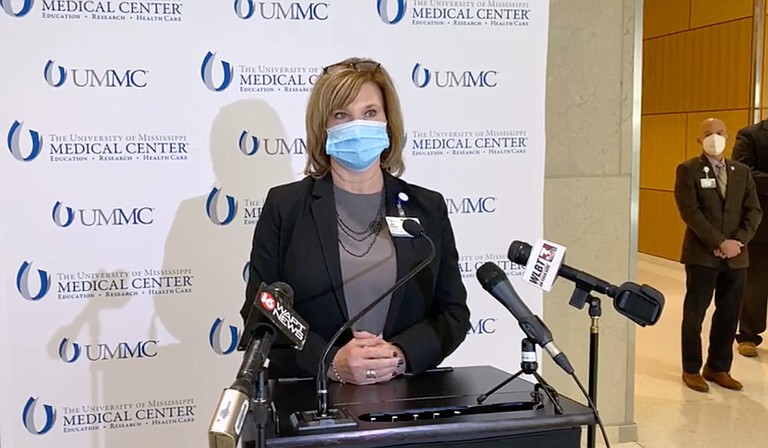 Dr. LouAnn Woodward, vice chancellor for health affairs and dean of the School of Medicine at the University of Mississippi Medical Center, called on Gov. Tate Reeves to reinstate the statewide mask mandate, warning that rising hospitalizations could force crisis standards of care. Photo courtesy UMMC

Dr. LouAnn Woodward has seen enough. As vice chancellor for health affairs and dean of the School of Medicine at the University of Mississippi Medical Center, she earlier interceded in the state’s COVID-19 policy, urging the state for a shelter-in-place order early in the crisis, and later, for a statewide mask order. Now, she is again sounding the alarm that the state’s piecemeal policy is failing.

At a press conference yesterday afternoon, Woodward said it was time to reinstate the statewide mask mandate that helped crush the summer spike. “From the standpoint of myself and the leadership at the medical center, we very much believe we should have a statewide mask mandate,” she said. “We have some reasonable evidence to believe the county-by-county approach is not working. … It’s not turning these numbers around for us.”

COVID-19 numbers continue to wash in, with 665 new cases reported yesterday, accompanied with a crushing 53 new fatalities. A spike in deaths is an inevitability after the rolling average spiked last week to numbers matching the worst days of the summer peak.

At a press conference at the University of Mississippi Medical Center, Assistant Vice Chancellor Dr. Alan Jones shared his grave concerns that Mississippi was not alone in the rapid filling of its hospital beds.

"Regionally and even beyond, hospitals are struggling," Jones said. "ER at baseline is a pretty chaotic, unpredictable place. ... When you layer something highly infective like COVID on top of it, it becomes exhausting."

Already, medical professionals are bearing an immense burden of care. And the fatigue from overwork is taking its toll. “It’s hard for them to get a break,” Jones said. “We have some policies in place … to spread the patients around in a safe way, so that we don’t overburden one particular group of nurses.”

Often, the looming hospital crisis is described as a “bed” shortage, which suggests it is a lack of facilities and space that is threatening proper patient care. Public health officials have repeatedly challenged this idea, explaining that the real threat is a lack of physicians and nurses, resources that cannot be spontaneously constructed or repurposed.

Some of the stopgap measures for a physician shortage are still available, including “(Bringing) in people who are retired. Readjusting our in-house care teams.” Woodward said.

That readjustment, amid a deepening crisis, could force UMMC to rely on pediatricians treating adult patients. Earlier in the summer surge, UMMC did just that, admitting some adults to pediatric wards for lack of space and care elsewhere.

“If we get to the point where we need to, from the physician standpoint, we can have physicians who might not normally take care of these patients work with the supervision of the experts—pulmonary care and infectious disease doctors,” the UMMC chief explained.

The nursing shortage is perhaps the most dangerous faultline in the coming crisis. Though flexibility remains for diverting physicians toward non-standard care for COVID-19 patients, Woodward warned that “we don’t have that same flexibility in our nursing coverage.”

In a statement to the Jackson Free Press, Woodward explained the consequences of the surge continuing to spiral out of control, especially in the wake of mass gatherings over Thanksgiving. Another upswing from where the state stands now would degrade the standard of care toward crisis care, forcing UMMC to change which patients would be admitted and what care they’d receive.

Ultimately, already exhausted nurses and physicians would be burdened with an even greater patient load, harming outcomes for every patient in the hospital system, not just those with COVID-19.