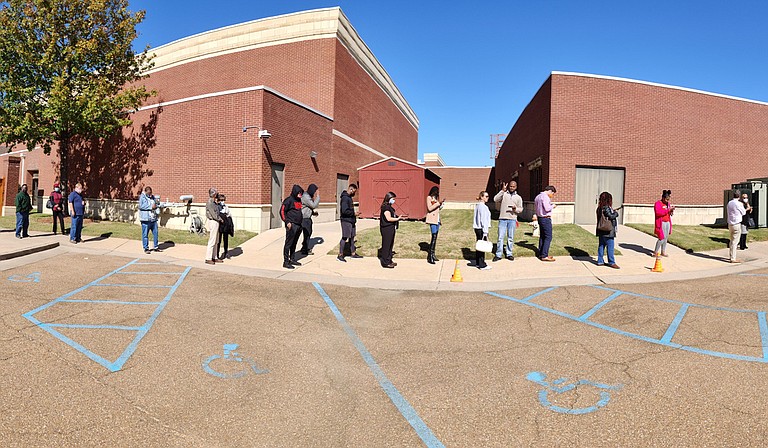 Mississippi voters convincingly approved a new state flag in yesterday’s elections, as well as a measure that ended the state’s Jim Crow election law. Initiative 65, which mandates a medical marijuana program for a variety of conditions by August 2021, sailed to victory. Photo by Nick Judin

A day of overwhelming electoral turnout in Mississippi drove the state’s three ballot measures to convincing wins, a result political figures of both parties heralded as evidence of progress in the Magnolia State. As of press time, roughly 92% of the vote has been counted, providing decisive results for all state races save the Mississippi Supreme Court contest between incumbent Justice Kenny Griffis and Judge Latrice Westbrooks.

Voters first approved the new Mississippi state flag, with support for the referendum well above 70%. The result decisively closes the book on the decades-long struggle to remove the Confederate imagery from Mississippi’s flag, while satisfying the lingering critics of the legislative-led effort for bypassing a popular vote on the issue.

At the same time, Mississippi’s did away with another Confederate relic: its own version of the electoral college. Ballot Measure 2 simplifies Mississippi’s statewide elections, removing the requirement that statewide candidates win a majority of state House of Representatives districts in addition to winning the popular vote. Seventy-eight percent of voters who weighed in on the measure—more than 750,000 Mississippians counted by press time—supported the change, an even greater margin than those who backed the new state flag.

The district majority requirement was a relic of the 1890 constitution, cobbled together in reaction to Black Mississippians getting the right to vote after the South’s defeat in the Civil War. At the time, Mississippi’s white political leadership was unashamed as to the purpose of the new document. Solomon Calhoon, the president of the convention, was clear.

“Let’s tell the truth if it bursts the bottom of the universe,” he said then. “We came here to exclude the Negro. Nothing short of this will answer.”

Perhaps most shocking were the results of Ballot Measure 1: Initiative 65, which aimed to write a medical-marijuana program into the state’s constitution. Now, Mississippians will have their medical marijuana, and they will have it by 2021. Voters resoundingly supported “either” Initiative 65 or 65a, the alternative measure that would have directed the Legislature to provide for a limited program, for those with terminal conditions, at its own pace.

But in the second question, Initiative 65 crushed the Legislature’s alternative options by a margin of nearly three to one. Despite a last-minute push against 65 by many public-health leaders, including the Mississippi State Department of Health’s Dr. Thomas Dobbs, MSDH must now balance the second year of the coronavirus fight with the creation of an expansive medical-marijuana certification program, sure to draw attention from the nation’s growing marijuana industry.

With Mississippi’s vote in the presidential race and the Senate contest decided on election night, and the U.S. House races all unfolding in favor of the incumbents, Rep. Bennie Thompson will remain Mississippi’s only Democratic representation on a national scale.