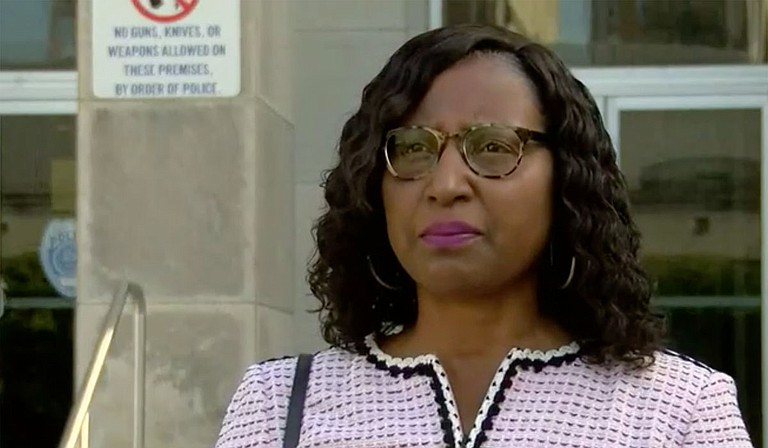 Lisa Ross, attorney of the family a minor a Jackson police officer allegedly propositioned, held a press conference accusing the City of Jackson of an inadequate response to the accusation. He was released on a Saturday with an unsecured bond. Screencap courtesy WLBT

Recently, at a press conference Mayor Chokwe Lumumba said that none of the “outside agitators” who opposed the disarming of Jackson’s overwhelming black population cared enough about the issue of innocent children’s lives being taken to say their names. However, amid recent reports and controversy surrounding long-time JPD Officer Mark Coleman being charged with exploitation of a minor, in connection with text messages he allegedly sent to a 16-year-old girl soliciting sex, Mayor Lumumba has remained silent. Although the City has claimed Coleman was arrested on the charges against him, ironically, JPD has released no booking photo or other information verifying Coleman’s arrest.

If it were not for Lisa Ross, the attorney representing the minor’s family disclosing the officer’s name, the public still would not know who the officer is because the police department, which answers to the mayor, refused to disclose the officer’s name or the precinct he patrolled. Is Mayor Lumumba too craven to publicly say the name of this officer who attempted to prey upon this young girl? Are there “credible messengers” to expose this matter?

Most of these people have two options: Scraping together money among their equally indigent family members to secure their liberty or; languishing in jail for months. When indigent defendants are unable to pay the ransoms required for their release, they frequently lose employment and housing. Given the pervasiveness of violence in the county jail, an inability to post bail could result in the loss of life.

Indigent defendants who post bail are often saddled with the additional burden of 24-hour electronic surveillance via GPS monitoring and a curfew that amount to incarceration by another name. Some defendants who are employed lose their jobs as result of being ordered to wear ankle monitors. Unemployed defendants have difficulties finding a job when prospective employers look down and see they have a 21st-century slave shackle attached to their ankle.

Initially, Coleman faced none of this upon being allowed to walk free.

Ordinarily, when a crime is alleged to have been committed against a minor, at the very least the accused will be ordered to have no contact with the person. Before the attorney, which the family of the child Coleman allegedly propositioned hired, went to the media to decry the deferential treatment of the officer as a result of being law enforcement, the municipal court judge’s initial order of release did not prohibit Coleman from contacting the alleged victim.

To avert further fallout, the radical mayor sent the black municipal court judge and police chief, whom he presides over, to do damage control. As a result, the judge amended his initial order to include electronic monitoring and a no-contact order with the alleged victim as conditions of his release.

This effort was to make it appear that the City, JPD and the judge are not treating Coleman any different from other people charged with crimes. But the fact that the police state can treat a JPD officer favorably under circumstances where they treat ordinary people contemptibly is not surprising, and that reality should not be ignored.

The municipal judiciary, police state and the mayor’s office are incestuously intertwined despite the police chief’s public statement that JPD has no influence on bonds in criminal cases. If this is the case, why are JPD detectives often present at initial appearances arguing to municipal-court judges what bonds should be set in criminal cases? Many times, municipal-court judges acquiesce to the requests of detectives. Is this not unauthorized practice of law? Shouldn’t these municipal court judges who are lawyers know better and prohibit this unethical practice?

If JPD is not involved with bonds, how was Coleman’s release negotiated on a Saturday when courts are not in session? Most people arrested on a weekend remain incarcerated until they can see a judge Monday morning in open court.

Did someone from JPD contact the judge who ordered Coleman’s release? Having been vocal in the past about low bonds being set by municipal-court judges that serve at his pleasure, why does Mayor Lumumba remain silent about Coleman being released on an appearance bond? Why has Coleman not been fired and instead simply placed on administrative leave likely with pay? It seems talk of “privilege” and “racial disparities” are intermittent.

It is evident when law enforcement exploits and degrades the “least of these” among us that those employed to uphold the legitimacy of the myth that the police state protects and serves are willing to turn a blind eye. Some people might believe that Coleman’s alleged actions, if true, are an instance of one individual bad actor. However, such actions evince a culture of predatory degeneracy within JPD.

Almost a year to date before Coleman’s arrest, JPD officer James Hollins committed suicide on Highway Interstate 220 after videos of him having sex with a 15-year-old girl in his patrol car were given to JPD Chief James Davis. Hollins was never arrested after Chief Davis received those videos. Mayor Lumumba said Davis simply requested that Hollins be placed on administrative leave, likely with pay. Lumumba also claimed that the video submitted to JPD did not show the faces of the individuals involved in the sexual acts.

Is there any evidence strong enough to trigger the immediate firing and incarceration of a police officer in the most radical city on the planet?

Only Talking About Institutional Racism When Whites Lead It

Apparently, at the time Hollins committed suicide, JPD had launched an internal investigation into the allegations against him. What need was there for further investigation before Hollins’ arrest? Black toilers, accused of crimes, are routinely arrested without the benefit of complete and thorough investigations. Why?

As a defense attorney, I have represented people arrested on accusations of sexual assault where the evidence was flimsy at best. Something is terribly wrong when JPD cannot arrest its officers when they have direct evidence of criminality. What is wrong, besides the police’s criminal behavior, is “activists” and their preferred politicians only speak about institutional racism when whites are leading it. Yet, they reveal that, in fact, they don’t believe the institution of the police inherently degrades blacks.

I know that some will seek to justify Coleman’s behavior, which is also an expression of patriarchal subordination and exploitation, by seeking to vilify the alleged victim as “fast.” This illogic demonstrates a willingness to be complicit with degenerate institutions. They choose to believe instead that individuals in charge, especially when they are black, and their policies are pivotal and liberating. What is decisive, despite all the chatter, is all black lives do not matter.

The radical mayor continues to provide cover for the police state in Jackson as officers continue to murder, maim and molest residents. The mayor’s silence is golden for police who victimize, exploit and degrade in Jackson. Black power should mean power to the common people so everyday people arrive on their own authority.