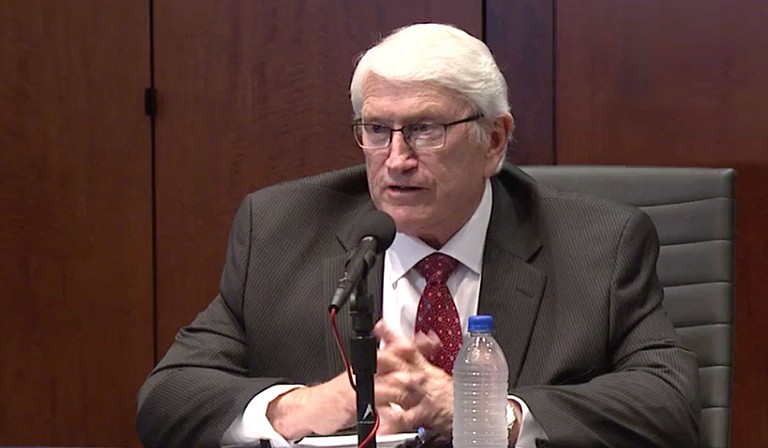 Gov. Tate Reeves announced the nomination of Burl Cain, ex-warden of Angola Prison in Louisiana, as commissioner of the Mississippi Department of Corrections. Cain (pictured) resigned from his wardenship in 2016 after reports implicated him in misspent funds and misappropriated labor. Photo courtesy State of Mississippi.

Burl Cain, the infamous ex-warden of Louisiana’s Angola prison, is Gov. Tate Reeves’ choice to lead the Mississippi Department of Corrections out of the morass in the state’s prisons that the governor inherited at the start of his term, a culmination of prison issues that grew during his two terms as lieutenant governor and president of the Mississippi Senate.

Cain resigned from his position at Angola in early 2016, after the Baton-Rouge Advocate detailed the then-warden’s business dealings with the family members of state inmates.

The report prompted a dual investigation by Louisiana's legislative auditor and the state’s Department of Corrections into the commissioner’s relationships with the families of the incarcerated and his use of prison funds and labor.

State investigators interrogating Cain’s financial entanglements with the family members of inmates found it more appropriate to adjust the wording of the state’s policies and regulations than to allege misconduct on the part of Cain, The Advocate reported in 2016.

“Specifically, Cain’s business partnership with Charles Chatelain, the stepfather of double murderer Jason Lormand, an Angola inmate, did not violate rules barring ‘non-professional relationships with offenders or with offenders’ family and friends,’” Corrections Undersecretary Thomas Bickham wrote in a Jan. 13 memo. He further explained that “the longstanding consensus in the department of this rule is that it is intended to prohibit an employee from entering into a secretive personal and/or romantic relationship with an offender or member of that offender’s family.”

A firm handshake over investments in $2 million of land purchases in West Feliciana Parish evidently failed to meet this standard. Bickham suggested the department clarify the rules to more accurately represent their intended enforcement.

But Louisiana’s legislative auditor conducted a more thorough investigation in early 2017, finding a pattern of potentially criminal misuse of funds and labor, including weeks of work on the warden’s home, roughly 60 miles away from the prison. Corrections Secretary Jimmy LeBlanc responded to the auditor’s report, stating that the department would seek restitution from the ex-warden to the tune of $20,000, either from a civil suit or criminal restitution. No criminal charges against Cain have stemmed from the incident.

‘The Best Possible Person In America’

Cain, speaking to the press yesterday in Jackson alongside the governor during his daily COVID-19 press briefing, dismissed the allegations. “I think what's important is that those allegations were unfounded, that there was no crime committed,” Cain said. “And so what we have to do is avoid the hint of impropriety. We will continue to do that, and I've done that throughout my career.”

The governor stood by his decision at the same press event. “The search committee was aware of the accusations. I was personally aware of the accusations,” Reeves said. “We did extensive research, and it seemed that once the politics were removed, that the accusations were basically dropped. And I have absolute full confidence in Burl Cain’s ability to change the culture at the Mississippi Department of Corrections.”

For Reeves, the ex-Angola warden’s record speaks for itself. The governor said in the midst of the crisis consuming Mississippi’s prisons, during which over two dozen inmates died, he charged “a trusted, diverse group of experts” to seek out a leader who could deliver the state’s carceral system.

The governor spoke reverently of Cain’s record at Angola. “He brought faith, security, safety, dignity and pride to the prison,” he said. “They went from beatings to Bible studies. He transformed America's bloodiest prison into the model of success for the nation’s inmates who were previously on lockdowns for fear of violence.”

But Angola’s reputation as “America’s bloodiest prison” and the transformation that launched Cain into international celebrity predates his tenure as warden. By the time Cain took his position at the top of the prison’s hierarchy in 1995, The Advocate reports, the shocking brutality evident in the prison during the 1960s and 1970s had, in large part, abated.

The enforcement of federal oversight through a consent decree into the following decades lessened the rampant violence at Angola. The consent decree ended for the prison in 1998, three years into Cain’s wardenship. An increasingly aged prison population—10 years older on average than when the violence peaked in the mid-’70s—may also account for some of the reduction in violence.

Cain’s methods centered on “moral rehabilitation,” a process through which Protestant instruction is used to impart moral sensibilities. "I can teach you to read and write, skills and a trade but without a moral component, I just make a smarter criminal," Cain told ABC News in 2006. "We have to have morality to rehabilitate. That's the only rehabilitation."

If the Legislature confirms him, Cain will take on the challenge of rehabilitating Mississippi’s entire prison system, taking the reins from interim Commissioner Tommy Taylor, who replaced Pelicia Hall in the first months of Reeves’ first term. Hall herself replaced ex-MDOC commissioner Chris Epps, currently serving a nearly 20-year sentence in federal prison for accepting bribes and kickbacks during his time at MDOC.

State intern Julian Mills contributed to this report. Email state reporter Nick Judin at [email protected] and follow him on Twitter at @nickjudin.