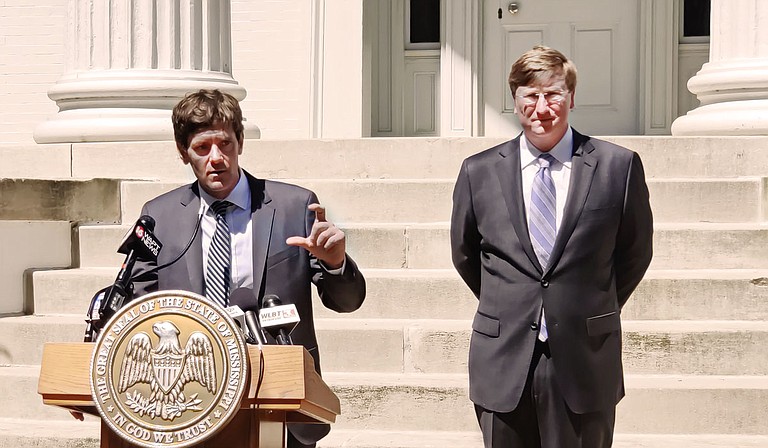 The time for playing defense against COVID-19 is over, State Health Officer Dr. Thomas Dobbs declared Thursday in front of the governor’s mansion in downtown Jackson. “Now, especially with the great support of MEMA and their team, we’re going to advance this mission to a more aggressive strategy,” he told the press outside the governor’s mansion Thursday afternoon.

That declaration came as the Mississippi State Department of Health was preparing to announce 94 new cases this morning, as well as two more deaths in Tippah County in north Mississippi and Harrison County on the Gulf Coast, bringing the total to eight. MSDH reported 94 new cases of COVID-19 in its morning update, bringing the statewide total of reported cases to 579.

DeSoto County remains the most infected area in Mississippi thus far, with 63 currently detected cases. Hinds County follows with 50. MSDH has processed 3,139 COVID-19 tests thus far, a number that does not include private lab testing across Mississippi.

Gov. Tate Reeves hosted Thursday’s press conference during a week when he has drawn state and national criticism for issuing an executive order calling for no groups of 10 or more people around the state, but with a long list of exempt “essential” businesses and organizations ranging from gun shops to department stores.

Source of MSDH Strategy: ‘A Couple of Places Really Shine’

“A couple of places really shine,” Dobbs said, naming South Korea and Singapore as particular exemplars in the global fight against COVID-19. South Korea is an unsurprising choice for emulation: early in the virus’ spread, its proximity to China made it one of the original hotspots for the transmission of the virus. Now the nation of 51 million has seemingly contained the novel coronavirus outbreak. After reporting a peak of 909 new cases as of Feb. 29, the country has now declined to a trickle of cases per day.

Read breaking coverage of COVID-19 in Mississippi, plus safety tips, cancellations, more in the JFP's archive.

Most importantly, this massive arrest of the virus’ growth in the country came without the intensive lockdown measures used to successfully defuse the situation in China. For a state looking to interdict COVID-19 while keeping businesses running, the South Korean model is appealing, and Mississippi’s public-health leadership believes it can work here.

“A lot of elements of their plans are easily transmissible,” Dobbs said.

“The first thing we really want to do more aggressively is basic case-finding isolation and quarantine,” Dobbs explained. This, combined with a radical increase in testing, is at the heart of the South Korean model. An increased capacity for testing an investigation comes alongside intensive “contact tracing,” which involves backtracking the other locations and individuals the infected parties came into contact with during the virus’ incubation period, during which it can stealthily spread.

Dobbs acknowledged that some of the solutions pursued in the South Korean model were “not appropriate” for Mississippi. South Korea implemented extensive tracking technology to retrace the steps of COVID-19 patients, from surveillance-camera recordings to GPS geolocation from the afflicted parties’ phones. Such methods are not on the table in Mississippi’s fight against the novel coronavirus, due to privacy concerns.

But drive-thru testing locations, meant to safely detect the virus in affected communities, are already in place at the Mississippi State Fairgrounds in Jackson. Dobbs announced new free drive-thru testing locations to open this Friday in DeSoto and Coahoma counties. Testing will be available for a single day, and applicants must use the C Spire Health App to be triaged for testing prior to arrival.

Gov. Reeves then took the opportunity to announce an addendum to his previous executive order. It clarifies, as the Jackson Free Press previously reported, that Reeves’ statewide order trumps any local orders that conflict with it. This restriction specifically applies to any curfews, shutdowns or social distancing guidelines that affect the operation of “essential businesses.” Reeves confirmed that his original order overrides local authorities’ ability to adopt a more limited scope of essential services—meaning they cannot force the closure of any of the vast list of “essential” services Reeves had included in his original order.

The governor added that he had taken his list of “essential” businesses and organizations that are exempt from COVID-19 safety restriction from this Department of Homeland Security list. However, Reeves’ order adds a variety of exempt businesses and expansive categories to the list, including gun stores, “offices” and department stores, as well as the list of operations that Mississippi Agriculture Commissioner Andy Gipson had recommended on March 20 should be included in order to preempt local orders that might cause their closing.

Reeves also said that he was allowing mayors to keep local orders in place that mandated the closure of local bars and restaurants. His executive order calls for closing them unless they could limit customers to 10 or fewer at a time. But that same leeway will not apply to his long list of “essential” businesses and operations.

But, Health Department Can ‘Close’ Parts of State, As Needed

But Reeves’ press conference also established that the Mississippi State Department of Health had the latitude to designate specific areas of the state to be zones of dangerous spread of coronavirus. MSDH could then take exceptional measures beyond what the governor has presently ordered, up to and including a shelter-at-home area lockdown.

At multiple times during the event, Reeves assured the press that he would follow the expertise of Dobbs and MSDH.

To any individuals or businesses reversing track and returning to business as usual as COVID-19 spreads across the state, Reeves said their actions should reflect the fact that the pandemic is just beginning to hit Mississippi.

“We are not at nor are we likely to be near the end of this crisis,” the governor said. “In fact, we’re more likely to be towards the beginning. My advice has not changed. Stay at home if you can.”

Any businesses that have the capacity to provide employees with remote work should continue to do so, the governor said.