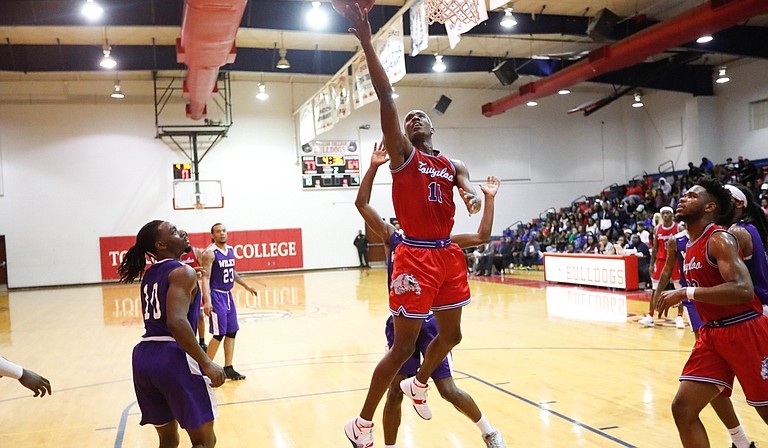 Tougaloo College is enjoying a great season on the hardwood with a 23-7 overall record and an 11-3 record in the Gulf Coast Athletic Conference. The Bulldogs were picked to finish fourth in the conference in the preseason but ended up finishing second in the regular season.

The exceptional season is bringing a first for Tougaloo as senior forward Ledarius Woods has been named a finalist for the Howell Trophy, which goes to the best men's basketball player from a four-year college or university.

Woods if the first player from Tougaloo to be named a finalist for the trophy. He joined the Bulldogs after playing for Coahoma Community College for two seasons.

As a junior during the 2018-2019 season, Woods played in 28 games, averaging 8.2 points and 3.1 rebounds per game. This season, he has become a breakout star for the Bulldogs as he has improved his game.

The Tunica, Miss., native is averaging 15.6 points, seven rebounds, 1.1 steals and one assist per game this season. He is ninth in the conference in scoring and has helped Tougaloo to a Number 12 ranking in the NAIA Coaches Top 25 Poll.

The senior leads the team in scoring and rebounding, as he is fifth in the GCAC in rebounding. Woods is one of the best long-distance shooters in the conference as he ranks second in made three-points shots per game with 3.3 made per game. He is seventh in three-point percentage at 37.6%.

Woods is a finalist along with Mississippi State University forward Reggie Perry and University of Mississippi guard Breein Tyree. This is the second straight season that Tyree has been a finalist for the award.

Fans will have a chance to help select the winner once again through a fan vote sponsored by C Spire. The fan vote counts for a weighted 10% of the final total with the state wide sports media accounting for the rest of the vote. Fans may go to http://howellgillomvoting.hscampaigns.com to cast votes for the player they believe to be the best men's and women's player in the state.

The Mississippi Sports Hall of Fame and Museum will host the awards luncheon for the Howell and Gilliom Trophies on Monday, March 9.