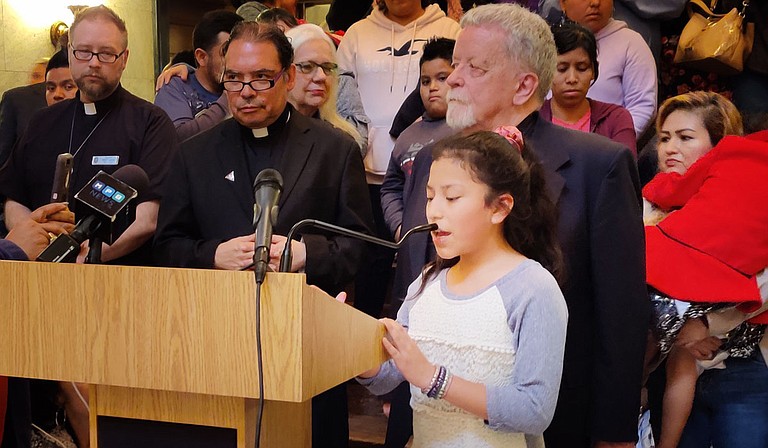 Immigrants and activists like Floribeth Lopez, 11, took to the Capitol last week, imploring legislators and the public to uphold the right of undocumented residents and to reject laws that target them. Photo by Nick Judin

"I try to be the strong one in my family," explained Floribeth Lopez, age 11, speaking to a busy Capitol rotunda Feb. 19. "I try to cheer my mom and sisters up."

Half a year before, ICE raids swept through Mississippi's immigrant communities, with authorities rounding up 680 people, releasing many and bundling others off to detention camps. But, Lopez says, "they destroyed my life, too, when they arrested my dad." Lopez barely stood tall enough to reach the microphone that the Mississippi Immigrants Rights Alliance set up inside the Legislature, but her voice was unwavering as she told her story.

"As an immigrant, you have to work 10 times harder than a born citizen," Jeimy Viveros said.

Viveros' life in the United States is a testament to that. As a first grader, she struggled to learn English, repeating a grade to overcome the language barrier in her new home. But hardship became triumph—Viveros eventually excelled at English, joined the gifted program at Power APAC school in Jackson, and headed to high school as a valedictorian. But the system presented another challenge: many academic programs for high-performing students were not available to undocumented immigrants like Viveros. She left the public-school system, attended New Summit School, graduated early and took classes from Holmes Community College while she tried to forge a path forward.

The Base Pair program at Murrah High School, an opportunity for young students to explore the world of research science, turned Viveros away because she did not have state identification. The University of Mississippi's RN-BSN program revoked her eligibility only a week before the beginning of the semester because of her immigration status. Viveros' dream of working as a pharmacist is on hold now—she works as a nurse at Baptist Medical Center.

Only the Deferred Action for Childhood Arrivals Act, or DACA, keeps Viveros out of the same deportation system that still detains Lopez's father. Viveros wants those who come after her to have a better shot at their dreams. She came to the Mississippi Capitol to advocate for in-state tuition for all residents living in Mississippi, documented or not.

Lopez and Viveros were just two among dozens who attended the rally. Their specific aims varied, with some calling for the release of workers in ICE detention and others protesting the Trump administration's new public charge rule, a policy change that immigration activists say imposes a "wealth test" on immigrants seeking a green card. The public charge rule allows immigration services to deny green cards based on use of public welfare.

"The public charge rule is designed to sow fear in communities of color," Mississippi Center for Justice's Director of Public Benefits Law Madeline Morcelle said. Beyond the direct threat of rejecting immigrants based on economic background, Morcelle explained, the public charge rule throws the lives of immigrants—both undocumented and documented—into chaos, spreading fear and confusion around access to basic services for which they work and pay taxes.

For Luiz Espinoza, lead organizer at MIRA, the debate over the rights of undocumented laborers often misses that point. "They're already here," Espinoza said in an interview with the Jackson Free Press. "They work. They pay taxes! All of the people who worked at those plants raided by ICE had taxes deducted from their paychecks."

Luiz described the frustration of workers navigating an "old and broken" immigration system. "Instead of making it easier for people to come legally, they make it harder," he said.

Espinoza has concrete goals when he speaks to legislators, like access to worker's compensation and driver's licenses for undocumented immigrations. He acknowledges that Mississippi is a difficult state for immigrants' rights. But MIRA's day at the capitol has a broader purpose. "What we do is show the public and press here at the Capitol the faces of the immigrants," Espinoza said. "Not killers, criminals, drug dealers. They are families, they're coming here to work."

"Me and my people are not going to give up," Lopez said. "We are going to fight for our rights, and if we started it, we will end it."