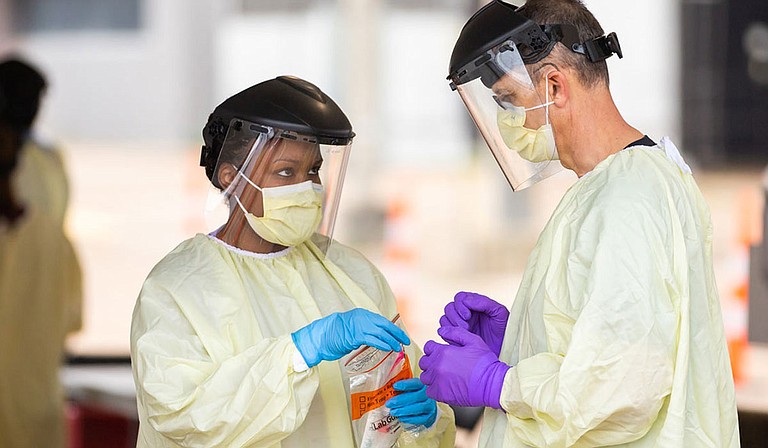 Mississippi’s seven-day average of new COVID-19 cases is now itself higher than virtually any single day during the pandemic prior to this week, as cases from the days leading up to Thanksgiving threaten the state with catastrophe. Photo courtesy UMMC

The days following Gov. Tate Reeves’ assertion that Mississippi was not exceeding its previous summer peak have been disastrous for the state’s fight against the COVID-19 pandemic, with each day bringing new reports of record cases and hospitalizations. 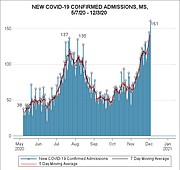 Mississippi’s deep descent into a worsening pandemic is driving public-health leadership to call for immediate action. But thus far, no political willpower has emerged to assert new actions or assistance to the state’s overburdened health-care system.

The Mississippi State Department of Health’s daily reports have yet to drop below 2,000 since Tuesday, with today’s numbers of 2,480 new infections again setting an all-time record. The seven-day average is now 1,876, itself higher than virtually any single day since the coronavirus arrived in Mississippi.

“There’s no doubt that we’re headed into the darkest period of the coronavirus so far,” State Health Officer Dr. Thomas Dobbs warned during a Wednesday press event.

It is presently impossible to tell how much of the surge seen in the latter half of the week is from Thanksgiving. Dobbs suggested that early travel and family gatherings from the days before the holiday may be to blame, but an even greater surge from the day of the event itself may still lie ahead.

Most worrisome to the state’s leading epidemiologists are the trajectory of hospitalizations. Multiple days this week have brought unprecedented numbers of single-day hospitalizations: 161 from Wednesday alone. In the summer peak, that number reached only 137. Worse still, Mississippians can expect that dangerous velocity to increase, as the staggering case numbers from the week after Thanksgiving translate into a flood of hospitalizations.

LouAnn Woodward, vice chancellor for health affairs and dean of the School of Medicine at the University of Mississippi Medical Center, laid out the immense danger facing the state’s hospital system on Twitter the day the spike arrived.

On Dec. 2, MSDH released a public-health guidance asserting the immense danger of the virus, and calling for an end to social gatherings, recommending that “Mississippians only participate in work, school or other absolutely essential activities.”

Still, at the press event that followed, Dobbs acknowledged that the guidelines were advisory in nature. Stricter orders for the state and its people will only follow if the governor wills it. But Reeves has taken no statewide actions this week, merely continuing to add individual counties to a growing list of COVID-19 red zones under mask and distancing requirements.

And while Gov. Reeves has held no COVID-19 updates since his Tuesday press event, he did make time for a private fundraiser in the home of Kent Nicaud, CEO of Memorial Hospital in Gulfport, reports Mississippi Today. “There were probably never more than 21, 22 people there at a time,” Nicaud told editor Adam Ganucheau, asserting that sufficient social distancing guaranteed the event’s safety.

But repeatedly this week the governor’s own state health officer has pleaded for Mississippians to avoid all social gatherings, regardless of their relative safety. A party with over 10 attendees in a single space would itself be a violation of the governor’s own executive order, active in Harrison County since Oct. 26.

Dobbs declined to blame any particular leader for the rapidly devolving situation in Mississippi at MSDH’s press event. But he did acknowledge “many role players” who must take responsibility for the dangerous unraveling of the strategy, including a clinic director in Tupelo who bizarrely—and falsely—claimed that multiple tests for the same patients were artificially inflating the numbers.

“Quit buying into crazy nonsense. People are dying. Please stop making up stupid excuses,” the state health officer raged, excusing himself to regain his composure, a rare crack in his measured tone.

“A lot of us aren’t playing the role we’re supposed to,” he finished.