Gov. Declares State Of Emergency Ahead of Dual Storms, Legislature Back For DMR Budget 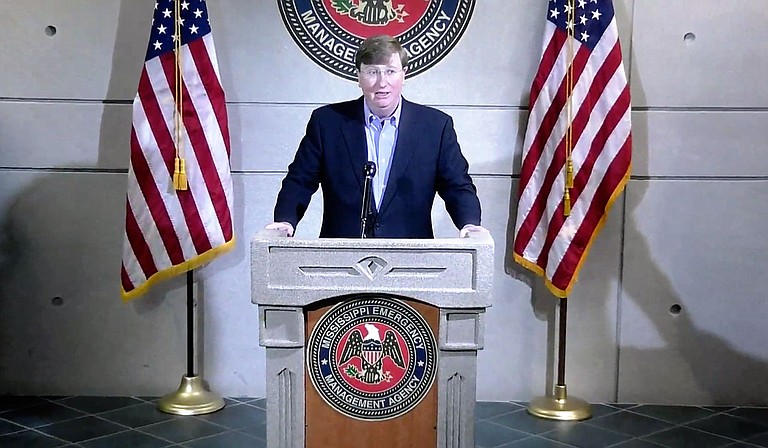 Gov. Tate Reeves declared a state of emergency ahead of tropical storms Marco and Laura. The Legislature will gavel in the evening of Monday, Aug. 24, to settle the issue of Department of Marine Resources funding. Photo courtesy State of Mississippi

Gov. Tate Reeves declared a state of emergency in Mississippi on Saturday ahead of tropical storms Marco and Laura, expected to make landfall along the Gulf Coast just to the west of Mississippi. The dual storms are both due to arrive this week with Marco, recently weakened to a tropical storm, making landfall in Louisiana tonight. Laura is expected to hit two days later on Wednesday evening. Projections currently show that storm to be strengthening into a category two hurricane.

At a press conference this morning, Gov. Reeves joined with Mississippi Emergency Management Agency Director Greg Michel to update the state on the current situation in the Gulf of Mexico.

Reeves noted the uncertainty of the dual storms. “The lack of predictability is something that we should all point out, and that has certainly been the case as the fact is that things have been changing very rapidly, almost hourly. But we have a pretty good idea of where we find ourselves,” he said.

Coronavirus, looming large over all the events of 2020, presents a unique threat to evacuees with shelters posing risks for clusters of viral transmission. Reeves stressed that shelters will be available if needed, but warned of the dangers. “COVID will not prevent us from opening shelters, but it's important to ... (emphasize that) shelters do place individuals more at risk during this COVID-19 environment,” he explained.

Michel called for vigilance through Marco’s downgrade: “Complacency is always a concern of mine when we have a storm … that downgrades.” Unpredictability from both storms should drive Mississippians to remain cautious, the MEMA director said.

Later this evening, the Legislature is scheduled to gavel in to address funding for the Department of Marine Resources, an unresolved struggle from previous days in the extended session. The DMR, which the Legislature created in 1994, protects and studies wetlands, marine and estuarine habitats, many of which are key to numerous state industries.

At the heart of the debate lies DMR’s primary funding source, The Gulf of Mexico Energy Security Act (GOMESA), a federal statute from 2006 that divides offshore oil and gas production revenues in the Gulf amongst Texas, Louisiana, Mississippi and Alabama.

This year, Mississippi received $51 million in GOMESA funds. Prior to 2020, DMR operated in concert with the governor’s office to award GOMESA funds to projects across Mississippi’s coastal counties; the legislative holdup arrives as some lawmakers argue that the Legislature must approve future projects.

On background, multiple lawmakers suggested a deal has been reached that will provide for the necessary funding for the rest of the year, averting any potential crises with the Legislature mostly absent, storms approaching and the remaining budget for the agency dwindling as August ends. But further debates on the subject of GOMESA spending authority are expected in the near future.

DMR will assist in the response to Marco and Laura as part of its standard duties, which the governor assured Mississippians the budgetary fight would not affect. “The Department of Marine Resources plays a critical role in hurricane preparedness, as well as hurricane response,” Reeves said. “They do an excellent job. Their law-enforcement personnel step up every single time that we have an issue. We anticipate and expect they'll do so again today.”

“We knew that we could essentially run the agency in July and August by executive action,” the governor continued. “But once we get towards the end of August, that would be a little bit more challenging … My anticipation is that (the Legislature) will successfully pass a Department of Marine Resources budget today, and not stay in session very long at all … I think the outcome is a good one.”