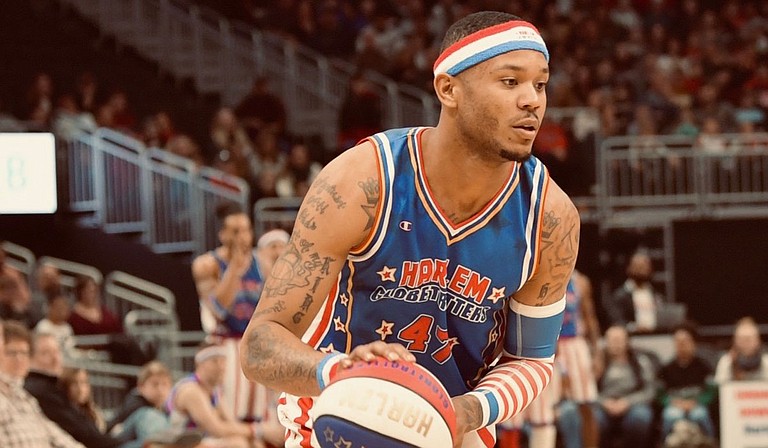 Sitting at home, current Harlem Globetrotter Chris Hyche is socially distancing himself as he waits for the coronavirus to pass so that he may resume his basketball career. The only exercise Hyche is able to do is running.

Each day Hyche runs two and half miles as he tries to stay in shape after being unable to do a traditional workout. It has been over a month since he has been able to play basketball after he and the rest of Globetrotters had their European Tour cut short.

“We were at the beginning of our tour of the United Kingdom, when we were told they were suspending the rest of the tour,” Hyche says. “We were told it should only last a couple of weeks, but that was before we really figured out how things would happen.”

The former Provine High School star has seen most of the country and the world thanks to basketball. He played at Jackson State University and Talladega College in Talladega, Ala., during his college career.

In his travels, Hyche has been to 38 states and over 26 different countries thanks to basketball. Basketball has allowed him to meet different people and give him a chance to go out into different communities to talk to kids.

Growing up with deaf parents, Hyche knows American Sign Language, which he uses to visit schools for the deaf and help with the Globetrotters’ anti-bullying campaign. “I got to work (for) former NBA player Mike Glenn at his camp for the hearing impared,” Hyche explains. “It inspired me to use my talents to help in community service.”

While Hyche is thankful for everything the Globetrotters have done for him, there still is a competitive itch that needs to be scratched. Basketball with the Globetrotters is as much athletic as entertainment.

“I love the Globetrotters and entertaining fans, but I hope for one more run of competitive basketball,” Hyche says. “If the right opportunity presented itself or the right situation, I would consider it.”

At 31, Hyche believes he can play competitively until he is 35 or older because he has taken care of his body and hasn’t had any major injuries during his career. He is working on adapting to vegan eating habits to see if it helps his career last longer.

“I bring a good bit to the table for any team. I have plenty of athleticism, and I’m ready to bring my hard hat every night ready to give my all,” Hyche explains. “As I have gotten older I understand the game better and have raised my basketball IQ.”

Leadership and mentorship are another strong attribute he brings to any team. “Everything I have been through and the places I have been have allowed me to learn to reach players differently. I have learned to talk to players to give them constructive criticism that they take the right way,” Hyche says.

Before any hope of playing basketball anywhere, the coronavirus needs to slow down to the point teams can gather again. Getting in shape is the next step as Hyche has reached out to former Provine coach Luther Riley.

Riley is the type of coach who can put Hyche through a workout that will have him basketball ready quickly if any teams reach out to him. Hyche hopes to be able to start workouts as quickly as possible to get into the best shape of his life.

Hyche is happy to return to the Globetrotters, but he hopes to scratch that itch just one last time.