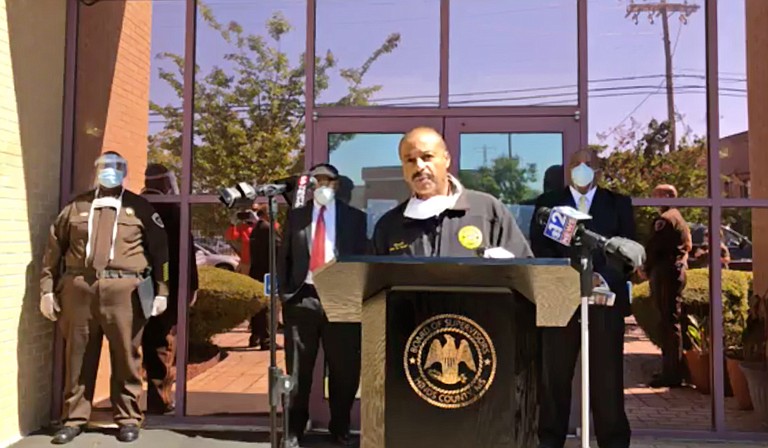 At an April 17 press conference, Hinds County Sheriff Lee Vance updated reporters on the county’s efforts to reduce the jail population as part of wider measures to mitigate the spread of COVID-19 in correctional facilities. Photo courtesy Hinds County

The Hinds County Board of Supervisors is extending its COVID-19 state of emergency for non-essential employees until May 1, waiving penalties for overdue, late and new license plates, and taking additional steps to prevent the spread of COVID-19 among its employees and detainees in county jails.

At a press conference Thursday announcing the measures, District 1 Supervisor and Board President Robert Graham noted that essential employees would follow the guidelines set forth in its March 16 emergency declaration, including working staggered shift times, while non-essential employees who can work remotely are still encouraged to do so.

The Mississippi Department of Revenue is waiving all fines and penalties associated with tag renewal since Gov. Tate Reeves’ shelter-in-place order went into effect on April 3, Graham said. Several county buildings will reopen April 20, including the Hinds County Tax Collector’s Office, which handles license-plate renewals and homestead payments. It will operate on a Monday, Wednesday, Friday schedule from 8 a.m. to 5 p.m.

He also applauded the efforts of Hinds County District Attorney Jody Owens and Hinds County Sheriff Lee Vance, along with county judges, for their work to mitigate the spread of COVID-19 in county jails. That included reducing the inmate population, who are at particularly high risk for contracting the virus.

“I want to reiterate that Hinds County is prioritizing the health and safety of its employees, its citizens, including those that we are detaining,” County Administrator Jennifer Riley Collins told reporters at the press conference.

“We are taking every measure to prevent the introduction of or the spread of this deadly virus,” Riley-Collins said, referring to the efforts to prevent the virus from entering the county juvenile facility.

The county has provided all 13 underage detainees at the Henley-Young Juvenile Detention Facility with masks, hand sanitizers and soap, the administrator said. Additionally, the county is taking the temperatures of all visitors and employees before they enter the facility, and requiring all staff to wear gloves. Hand sanitizers are available to all residents, visitors and employees, who are instructed to sanitize work areas throughout the course of the day.

“We are promoting social distancing, physical distancing as much as possible by implementing small groups and ensuring the 6-foot rule,” Riley-Collins added.

Sheriff Lee Vance pointed to similar measures in place to protect the adult inmate population in Hinds County. The county is screening all jail employees for their temperatures and requiring them to complete a symptom questionnaire before the start of their shift. The board of supervisors has provided county jails with approximately 19,000 masks and 30 cases of gloves, the sheriff said.

On April 10, Hinds County revealed that a county corrections officer had tested positive for COVID-19. That employee is recovering in the hospital, Graham said.

An additional 18 employees who may have come into contact with the infected officer are in self-quarantine at home, Vance said.

“These 18 employee are doing fine, and they are not exhibiting any symptoms at this time. They are expected to return to work on Monday, April 20,” he said, adding that his office was monitoring an ever-evolving situation.

No More Jail for Misdemeanors

The district attorney and sheriff’s offices report working since the county declared a state of emergency to reduce the jail population. Owens told the Jackson Free Press on March 18 that his office was recommending certain pretrial detainees for conditional release. Additionally, the Jackson Police Department announced on March 27 that it would no longer arrest and book people people into jail for misdemeanors after revealing that one of its police officers had contracted the virus.

At Thursday’s press conference, Vance announced that the county inmate population count was at 376. Of those people, 217 are locked up at the Raymond Detention Center, 75 at the work center and 84 at the Jackson Detention Center.

“These numbers represent some of the lowest numbers that we’ve had at the Hinds County Detention Center,” he said. “Obviously, being able to keep the population low makes it easier to manage and makes spacing much more of a possibility,” Vance added.

Vance reaffirmed his commitment to reducing the jail population and thanked the DA’s office for working towards these efforts. He also thanked local judges.

“I would like to thank our judges for helping us to process individuals through the system so that we can keep our numbers low,” he said.