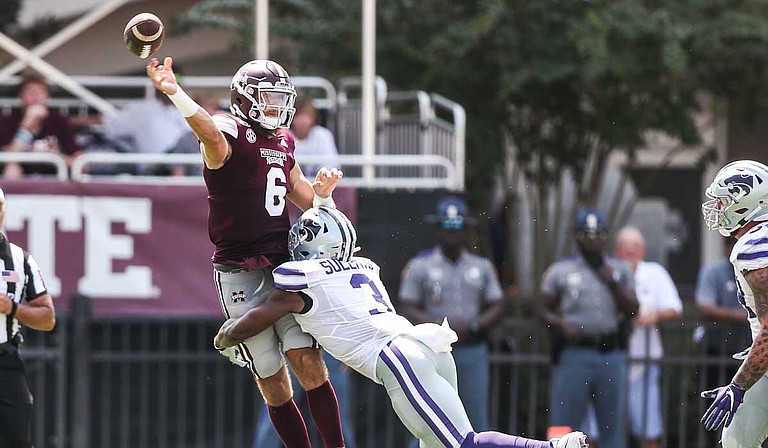 Mississippi State University quarterback Garrett Shrader introduced himself to the nation Sept. 14 in his first action of the 2019 season as the team faced Kansas State University. The freshman made a highlight that went viral on social media.

Shrader entered the game after starting quarterback Tommy Stevens became injured. Trailing 31-24 in the fourth and facing a fourth-and-16 play with the game on the line, he dropped back to pass and surveyed the field, but he failed to find an open receiver.

As the Kansas State defense closed in on Shrader, he took off down the field trying to get the first down. Roughly five yards from the first down, the quarterback leaped into the air as two KSU defenders hit him nearly instantaneously.

The hit caused Shrader to helicopter through the air and land about two yards short of the first down. Kansas State took over on downs and ended the game by running out the clock.

In the next game against the University of Kentucky, Stevens did not play due to injury, which allowed Shrader to make his first start of his college career.

The Charlotte, N.C., native played a spectacular game against the Wildcats. He accounted for 305 yards of total offense as he used his athletic ability to hurt the Kentucky defense.

Shrader ran for 125 yards on 11 carries as he led the team in rushing. He passed for 108 yards and completed 17 of his 22 passes with one interception and no touchdowns.

The quarterback accounted for all six plays that went over 20-plus yards. He completed a 25-yard pass, a 21-yard pass, and two 20-yard passes along with runs of 49-yards and 36-yards.

He is the first MSU quarterback to rush and pass for over 100 yards in his first start in school history. His efforts against Kentucky earned him SEC Freshman of the Week honors.

Shrader is the first true freshman quarterback from MSU to earn the honor. Former Bulldog quarterback Tyler Russell earned the same honor but as a redshirt freshman.

The freshman is also the first MSU offensive player to be named SEC Freshman of the Week since running back LaDarius Perkins on Nov. 27, 2010. The last Mississippi State player on either offense or defense to earn the honor was Leo Lewis for his play in the Egg Bowl in 2016.

Either Shrader or Stevens will start against SEC West foe Auburn University on Saturday, Sept. 28. The game will be broadcast on ESPN with a 6 p.m. kickoff.