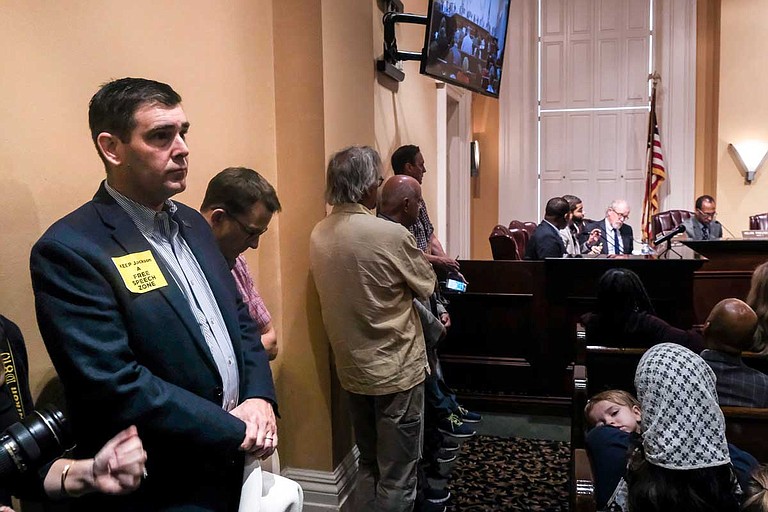 Mississippi Agriculture Commissioner Andy Gipson joined other anti-abortion protesters at a special Jackson City Council meeting on Sept. 26, 2019. The City is set to vote on a proposal to limit protest activities outside the state's only abortion clinic. A sticker on his jacket reads, "Keep Jackson a Free Speech Zone." Photo by Ashton Pittman

Mississippi Agriculture Commissioner Andy Gipson was among people lined up this morning in Jackson City Hall against a proposed 15-foot "buffer zone" to limit the often-loud and contentious anti-abortion protests that croweded the sidewalks near the Jackson Women's Health Organization in Fondren, Mississippi's only remaining abortion facility.

The proposed ordinance would create a 15-foot buffer zone around all health care facilities in the City that protesters could not breach, and also bar them from coming within 8 feet of a patient within a 100-foot radius of the clinic to talk or share leaflets without consent. Protesters also could not use any speakers or audio amplifiers within 100 feet of any health care facility. Violators would face up to 90 days in jail or a $1,000 fine.

Gipson has protested with his wife against abortion outside the clinic, where protesters from inside and beyond Mississippi often gather with large photos of features, signs and magnified sound, often attempting to interact with and "counsel" people going in and out of the facility, which is now known as "the pink house" due to a bright paint job reminiscent of Pepto-Bismol. It is in the middle of the thriving Fondren business district and next door to a large hotel currently under construction.

Jackson Police Department Commander Keith Freeman also told the council that JPD has gotten a large number of calls to the abortion clinic in recent years, adding that he hopes a buffer zone ordinance will decrease such problems.

The ordinance would apply to any health-care facility in Jackson, not just the abortion clinic.

Abortion and Reproductive Rights in Mississippi

A collection of stories on reproductive rights in the state and Mississippi's only abortion clinic.

The City’s legal team assured those gathered that the proposed buffer zone is legal.

"This ordinance does not ban any messages, literature or oral statements ... just some restrictions on the time and place," Jackson City Attorney Tim Howard said of the buffer-zone proposal. It is similar to a Colorado law that federal courts upheld, the city attorney said, adding that the City had governmental interests in passing the ordinance, including community tranquility and protecting people entering a health-care facility.

The constitutionality of such zones around abortion clinics is a mixed legal bag, to date.

Anti-abortion protests sued over Colorado’s buffer zone that limited protest, education, distribution of literature or counseling within eight feet of a person entering a health-care facility. But the law's detractors ultimately lost the court battle, with the U.S. Supreme Court ruling 6-3 in 2000 that the law was constitutional.

In 2014, however, the U.S. Supreme Court found that a Massachusetts law establishing a 35-foot buffer zone around abortion clinics, enacted after two women were murdered and five injured at abortion clinics, went too far constitutionally. The full court agreed, but without striking down such laws altogether. The 35-foot zone was too restrictive, and the State did not try less intrusive options first, the Court found in McCullen v. Coakley.

"The buffer zones burden substantially more speech than necessary to achieve Massachusetts' asserted interests,” Chief Justice John Roberts wrote for the Court. … “In short, the Commonwealth has not shown that it seriously undertook to address the problem with less intrusive tools readily available to it. Nor has it shown that it considered different methods that other jurisdictions have found effective."

Abortion-rights supporters were not happy, but found solace in the narrowly tailored decision. “Today’s Supreme Court decision, though disturbing, was not sweeping,” Carol Tracy, executive director of the Women’s Law Project, wrote in 2014 about the Massachusetts ruling. “The decision is narrow and nuanced."

Her colleague Susan Frietsche added: “Significantly, however, it did not declare that all fixed buffer zones are unconstitutional, nor did it overrule Hill v. Colorado or even discuss it, so floating 8-foot bubble zones within 100 feet of clinic entrances are presumably constitutional today as they were previously."

The legal battle in ongoing, including in a New Jersey case this year.

Anti-abortion activists and “sidewalk counselors” in attendance at City Hall today say the buffer zone would restrict their free speech. One anti-abortion attendee read his Bible while he waited for the Jackson City Council to take up the proposal. Some of them carried stickers reading, "Keep Jackson a Free Speech Zone."

In the meantime, many people on the neighborhood message site, Nextdoor, urged others to attend the meeting today in support of the ordinance.

While at the meeting, Gipson, who is up for re-election in November, tweeted: "Honored to be here at the Jackson City Council meeting to show my support for the pro-life community and our sidewalk counselors' freedom of speech within the City of Jackson. Leslie and I have served as sidewalk counselors. Every life is worth speaking up for."

The council is not expected to vote on the ordinance today.

This is a developing story. Check back for updates.

Email state reporter Ashton Pittman at [email protected] and follow him on Twitter from the meeting at @ashtonpittman.