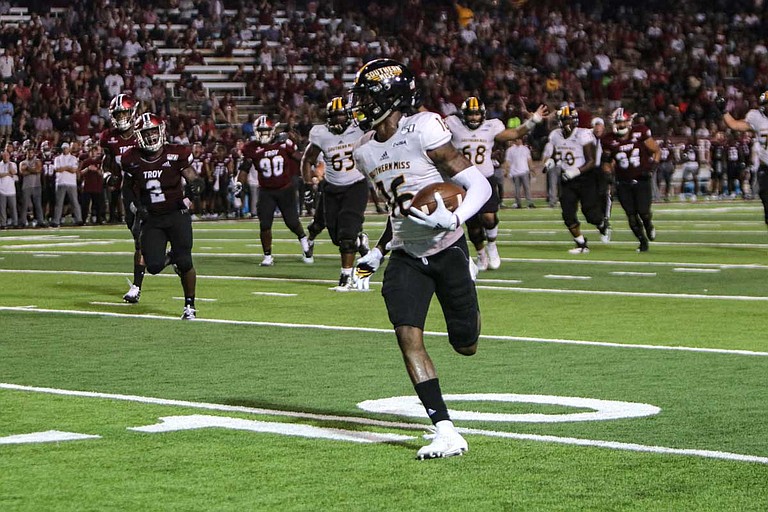 Watkins returned to USM in time for fall camp, and the league's 14 head coaches named him as Preseason All-Conference USA. Watkins showed up and showed out against Troy in his first time seeing action for the season.

Both teams exploded on offense as USM racked up 626 yards in total offense, and Troy finished 528 total yards. Quarterback Jack Abraham threw for 463 yards on 28-of-36 passing with two touchdowns. Fellow wide receiver Jaylond Adams added 180 receiving yards on 11 receptions, and added a 100-yard kickoff return for a touchdown, earning him the honor of C-USA Special Teams Player of the Week. This is the second time this season he has been named special teams player of the week.

Watkins and Adams are the first pair of Golden Eagle wide receivers to record a 100-yard receiving game since last October against North Texas University. Southern Miss survived a shootout against the Troy to earn a 47-42 victory.

The win moves the Golden Eagles to 2-1 on the season and the first road victory of the season.

Watkins is looking to improve on his redshirt sophomore season, during which he started in all 13 games. He led the team with 72 catches, 889 receiving yards and nine touchdowns, and he led the conference with 6.5 catches per game. The receiver played in all 13 games as a redshirt freshman as he caught 23 passes for 337 yards and two touchdowns. During the 2016 season, Watkins took a redshirt and did not play in any of the team's games.

Southern Miss faces a major obstacle this week as the Golden Eagles take on the University of Alabama. A big game by Watkins against the Crimson Tide could send his draft stock soaring.

USM and Alabama will face off on Saturday, Sept. 21, with an 11 a.m. kickoff and will be broadcast on ESPN2.