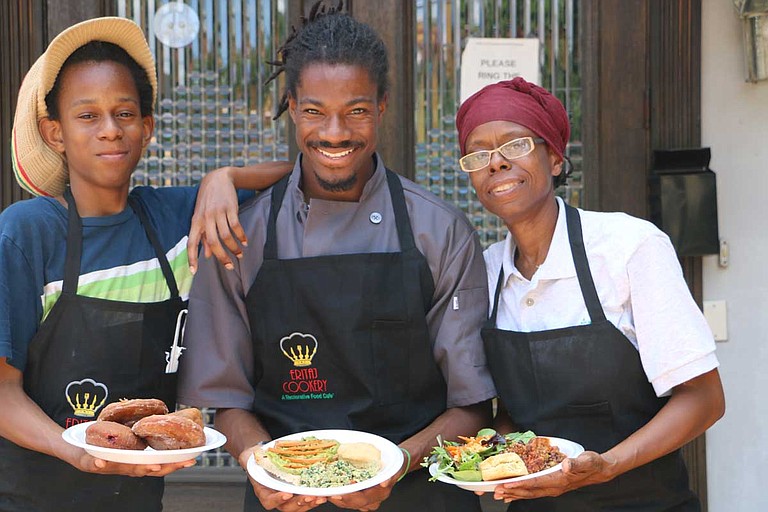 Salu Binahtabor, D.J. Baker and Felicia Bell are partners at Eritaj Cookery, a Restorative Food Cafe in the Kundi Compound in midtown. Photo by Rebecca Burr

Jackson's restaurant scene has been growing lately. Here is some restaurant news from recent months.

Sophomore Spanish Club, a '90s-themed Latin restaurant inside The  District at Eastover, held its grand opening on Monday, Aug. 26. The new restaurant occupies the former Cantina Laredo, which closed in February. MH Ventures of Jackson, which also operates Fine & Dandy in The District, manages Sophomore Spanish Club, and Jesse Houston, executive chef at Fine & Dandy, is the culinary director.

While the menu is not fully finalized, it does include items such as frito pie with chile con carne, fresh seafood and fajitas made on a charcoal grill, along with traditional items such as tamales and enchiladas. Drinks include margaritas on the rocks that customers can add flavors to, such as prickly pear, and other specialty cocktails, such as the "Cactus Cat," which is made up of honeysuckle, vodka, prickly pear, lemon, cucumber and orange.

The Mighty Crab (6380 Ridgewood Court Drive), a Cajun-style seafood  restaurant in Jackson, had its soft opening on Wednesday, Aug. 14, and the restaurant is now open. Mighty Crab's menu includes appetizers such as hushpuppies, calamari, steamed oysters and chicken wings, as well as sides like corn on the cob,  Cajun fries, steamed rice, sausage, boiled eggs and more. Customers can also order  baskets of fried shrimp, tilapia, catfish,  oyster and calamari, or boiled seafood such as shrimp, clams, and green or black  mussels. All seafood items come with  seasoning options including Cajun, garlic butter, lemon pepper or "juicy special," which is a combination of all three, and variable levels of spiciness.

Juan Soto, a Madison resident who moved from Nashville in May this year, opened Bevec's Cafe Simply Delicious (876 Lakeland Drive) in Jackson in June.

The cafe offers simple grab-and-go items such as sandwiches, wraps, salads, smoothies, coffee, baked goods and more. Bevec's will also sell a special Fusion Burger that Soto is partnering with fellow Madison resident David Raines, owner of Dave's Triple B and Flora Butcher, to make for Bevec's lunch menu. The burger will consist of Angus and Wagyu beef that Raines sources from Raines Farm, which his father, David Raines Sr., operates in Monroe, La.

Not Just a Burger

Pearl native Karen Hill held a grand opening and ribbon-cutting ceremony for her new restaurant, Not Just a Burger, inside the Outlets of Mississippi (200 Bass Pro Drive, Pearl) on April 16.

Not Just a Burger is a soul-food restaurant that offers everything from burgers and blue-plate specials to shrimp baskets, catfish, turkey or ham croissants, po'boys and more. Hill told the Jackson Free Press that she prepares everything from the burger patties to the batter for shrimp and catfish by hand from her own personal recipes, and makes it a personal policy to never serve leftovers.

The restaurant, which has vegan and vegetarian food, is open for breakfast and lunch on Monday, Thursday and Friday. The breakfast menu includes French toast, vegan donuts, homemade herb-infused biscuits, wraps and egg-scramble dishes that will change weekly.

For lunch, Bell serves what she calls "one-pot wonders," which are dishes cooked in a crock pot. The lunch menu will include three items each month. Lunch is also completely dairy-free, Bell says, and can include dishes such as quinoa enchiladas, chunky potato soup, lasagna and more. Eritaj has herbal tea and organic, Mississippi-roasted coffee, as well as selections of jellies and herbs from other local farms. The cafe uses some ingredients for dishes from local farms.

Eritaj is open Monday, Thursday and Friday from 7 a.m. to 2 p.m. For more information, find the restaurant on Facebook.

Urban Foxes features sweet and savory pies, scones, muffins, cookies and more, all made from scratch each day. The selection also rotates both daily and seasonally.

Shiro is open for both breakfast and lunch. For breakfast, the restaurant has both savory and sweet crepes, and dishes like ful medames, a Middle Eastern and African dish made with yogurt, eggs, fava beans and other ingredients.

For lunch, the restaurant offers a make-your-own-plate special for $10.  Customers first choose a base such as rice, tortillas or teff bread, along with one  protein and two sides. Proteins include tofu, grilled chicken, lamb or beef. Sides include beetroot or cabbage potatoes, spicy lentils, kale or collard greens, turmeric chickpeas and turmeric peas. Customers can also add an extra protein or an extra side for $2 each.

Holy Crab's menu includes traditional maki, a type of sushi, in varieties such as snow crab, shrimp tempura, spicy salmon, barbecue eel, crawfish and more. The restaurant also has dumplings, spring rolls, oysters, lobster bisque, fried seafood baskets, chicken and seafood po'boys, and more. Holy Crab also has a special called "Seafood Market," in which customers choose a type of seafood, a sauce such as lemon-pepper butter or Holy Crab sauce, and the level of spiciness for their dish. The price of the special varies based on the market price of the seafood used.

For more information on Holy Crab, find the restaurant on Facebook.

The Hungry Goat does not have seating inside the restaurant, offering only carryout and catering. The carryout menu includes entrees such as poppyseed chicken, chicken pot pie, chipotle meatloaf, chicken enchiladas and lasagna; appetizers like corn dip, pimento cheese, chicken salad and Texas caviar; and sides such as loaded potato casserole, green beans, creamed spinach, roasted veggies and artichoke bake.

Gold Coast Bar takes its inspiration from Prohibition-era nightlife along the Pearl River, an area once known as the "Gold Coast of Mississippi." The bar features wine, beer and a menu of original cocktails named for notorious Mississippi nightclubs.

Poke Stop allows guests to customize a sushi roll in a bowl, called a poke bowl, from ingredients such as sauces and both cooked and raw proteins.

Whisk, a creperie by La Brioche, serves savory crepes for breakfast, lunch and dinner. Whisk also serves fruit-filled sweet crepes with toppings such as La Brioche's own artisanal gelato, and a selection of the patisserie's most popular desserts.

Chef Alivia Ashburn announced on Facebook Sept. 11 that Ariella's NY Delicatessen at Cultivation will close this fall. The business' last date is Oct. 11.

"Don't you worry though," she wrote. "... it will only be temporary as we move into our new place. Goodfellas Deli coming soon to Gluckstadt!"

For a longer version, visit jfp.ms/restaurantnews2019.