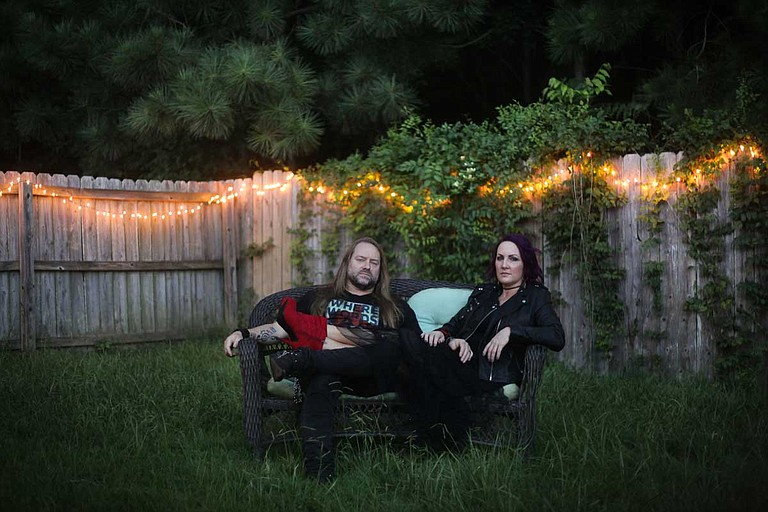 Nearly three years have passed since singer-songwriter duo Stace and Cassie Shook, who perform as Stace & Cassie, released their debut album, "The Ruins" on the Old Trace label. The album, which was characterized by intensely personal songs that dwell on the themes of redemption and resilience, earned Stace & Cassie several Josie Music Award nominations, and the couple won the award for Best Duo/Group of the Year for Southern Rock in 2018.

With a new single, "When We Grow Old" and supporting video released on Friday, Sept. 13, the married performers are looking forward to getting back into the studio to finish recording their long anticipated follow-up record.

The couple has been nominated for two awards at the 2019upcoming Josie Awards —the most prestigious indie awards ceremony—for Best Duo and Best Southern Rock act.   The couple recently spoke to the Jackson Free Press about their music, influences and what the future holds.

When did you two begin making music together?

Stace: We first met in 2011. We started playing together right around the start of 2012, I think it was. We were both playing in different bands, different duos. She was in a duo with a friend of mine, and I would show up at their shows, and he'd ask me to get up and do a song or two. Then we (spontaneously)accidentally did a song or two together, and it just kind of went from there. We realized we could work together musically. And then, yeah, we played for a few years. Doing covers paid the bills, but we write original music, and we're trying to make it as original artists.

Your songs are intensely personal. You guys are tapping into some deep relationship stuff. Is the new music you're working on going to continue to mine that deeply personal vein?

Stace: We don't know any other way to do it. Even though these relationship songs come from a dark place, there's usually a turning point in the song, a turn towards inspiration. "Sleeping In My Bed" is one of those songs. Our new single that (we dropped) for pre-sale on Friday and (we put) the video out on Friday, it's actually a song about us and marriage and overcoming all the things, and being there at the end of it all. It's about when we grow old. We write from within.

What are some of your musical influences? Who has inspired you?

Cassie: My two main influences were probably Patsy Cline and Janis Joplin. My musical taste has changed. Nowadays I really like more singer-songwriter-type music. I'm a huge fan of Brandi Carlile, but I like country too. I like Miranda Lambert and Jennifer Nettles, so I'm kind of all over the place.

Stace: I have been listening to music and loving it since I was little, so I've got everything from Motown to country, and in my teens and 20s, I was a straight-up hard-core rock guy. I always tell people she's a little more country, and I'm a little more rock 'n' roll. Being a guitar player first and foremost, I'm driven by guitar. So whether it's a good rock guitar, or a well-played acoustic guitar, that's where I'm at. ... Over the years what songs say has become a lot more important than what they sound like. Jason Isbell is at the top of my list as far as writers go these days. That guy, I don't even know how he comes up with the stuff he does. It's just amazing.

Tell us a bit about the album you are working on.

Stace: The album is in the works. Malaco Records is a hustling, bustling kind of place. They've got a lot of artists, a lot going on. It took a lot just to get this single finished. We're dropping this single. We hope to drop another one not too long from now and then have an album not much longer after that. It depends on getting studio time, to be honest with you. Maybe by spring or early summer of 2020.

Cassie: Unlike the first album where most of the songs were written before we got together, the songs on this album will all be co-written.

Stace: I'm a big fan of the Hammond B3 organ. There's a guy here named Scott Turner who we'll be calling on to play that.

Stace: We're trying to get to a point where we're playing listening rooms, like the Red Dragon in Baton Rouge and some of those other places. We're really trying to get towards the original side. That doesn't mean we won't play covers—the rent's got to be paid—but, yeah, we're trying to find places like that to play our originals.

Being songwriters, at the end of the day, if we can just have a decent career and do what we love doing, that's the main goal. If the album blew up and we became The Rolling Stones, I'd be okay with it. I don't know if she would (laughs).

Cassie: We'd like to get more into festivals and things like that. We've cut back a lot on gigs. We try not to book more than about five or six a month now. That way we're able to spread them out and slide into the good bookings when they are available.