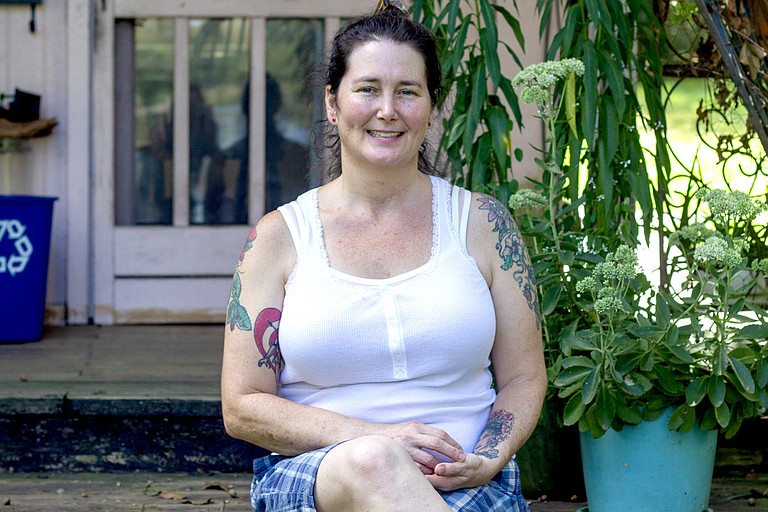 Artist and massage therapist Emelie Hebert has a lot of land—almost 3 acres to be exact—where she creates her artwork, glass beads and ceramics, and also hosts workshops, demonstrations and other events.

"I'm very lucky to have enough space to be able to work and share," she says. "I'm always inviting people, artists and other therapists to come and work with me out here. I really like collaborating a lot and hearing their ideas and what their solutions are."

Hebert's business, Studio M, is down a dirt road in Madison, surrounded by thick bands of bamboo and lots of trees, herbs and other plants. She has four buildings: her home, one up front that contains thousands of paintings, a mobile home she uses for making glass and ceramics, and one she rents out to a tenant, presently a friend who helps around the property.

Her house is behind the tenant space near a lake.

Hebert's mother and stepfather, Deborah and Skit Wyatt,  respectively, purchased the nearly 3-acre property in 1976. Deborah was an artist and interior decorator, and Skit was an architect, so they built the house themselves. Hebert, a Louisiana native whose parents divorced in 1988, spent half of the next year in Louisiana with her stepdad and the other half in Mississippi with her mom. In eighth grade, she began living with her mom full time.

While growing up, artistic expression was all around Hebert. Both her mom and aunt were artists, and her grandmother, Hilda Aderman, taught her how to sew.

She studied art at Hinds Community College, Holmes Community College and then Jackson State University, where she graduated in 1996 with a bachelor's degree in studio art with a concentration in ceramics. Afterward, she enrolled at Mississippi College for a while to earn her Master of Fine Arts degree but left to take care of her mother after Deborah had a severe heart attack. While Hebert originally started off painting, she eventually branched out into making jewelry from her handmade ceramic beads. She later moved into making glass beads because they aren't as fragile.

Hebert wants to make her land more of a community space. She is currently working on finding someone who can share the space with her, and is cleaning the spaces out so she can rent them to artists or therapists, she says.

"(I'm) just putting my feelers out because I really want this space to be a space for the community to come together because I don't know of another space out there that wants to invite other artists to use their torches and their kilns and their tools," she says. "There's not a space available, and a lot of people don't have a space to create, and there's plenty here. I just want to share."