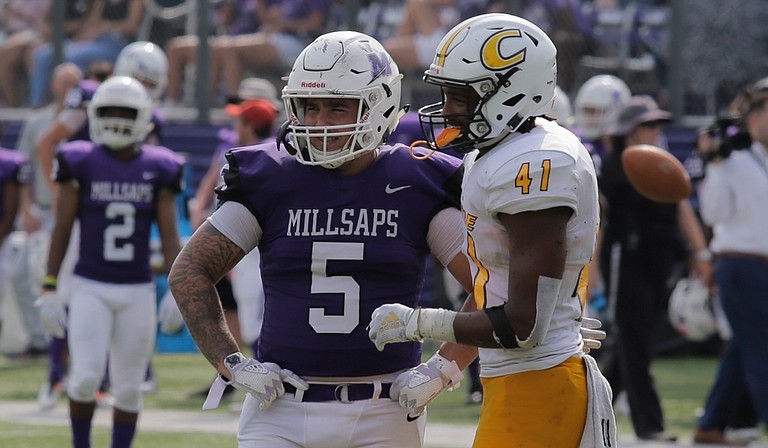 Millsaps College football is off to another strong start at 4-1 overall and 2-1 in Southern Athletic Association play. The Majors started 4-0 last season before losing five games straight and ending the season with a win to finish 5-5 overall.

Looking to bounce back after a blowout loss to nationally ranked Berry College, the Majors hosted Centre College this past Saturday, Oct. 5. Millsaps had not beaten Centre since Nov. 9, 2013. All of the games in the losing streak were by more than one score.

Breaking the losing streak to the Colonels would take a spectacular effort by the Majors. Defensive lineman Liam Vincifora provided a sensational game for the Majors' defense against Centre.

The Covington, La., native disrupted the Centre offense all game long as he put together a phenomenal stat line. Vincifora recorded 4.5 tackles for a loss for minus-26 yards, three sacks for minus-22 yards, six tackles, five solo tackles, a forced fumble and a quarterback hurry.

His efforts against Centre earned Vincifora SAA Defensive Player of the Week honors. D3football.com named him to its Team of the Week, making him the first Millsaps' player to earn such an honor since October of last year.

Five games into the season, Vincifora leads the SAA and Majors with six sacks and second on the team and third in the conference with 8.5 tackles for a loss. He has 18 total tackles, 13 solo tackles, two fumble recoveries, a forced fumble and a quarterback hurry.

Last season, the defensive lineman played in 10 games with 36 total tackles, 12 tackles for a loss, 6.5 sacks and one pass break up. His play earned him First-Team All-SAA and All-SAA Academic Honor Roll.

In 2017 he appeared in 10 games with 25 total tackles, four tackles for loss, one sack and one pass break up. In his senior season of high school in 2016, saw him named team captain and Second-Team All-District.

Millsaps returns to action on the road against Austin College on Saturday, Oct. 12, with kickoff at 1 p.m. The Kangaroos enter the game with a 2-2 overall record and a 1-1 mark in conference play.

The Majors return home to finish out Octover with a game against Trinity University for homecoming. Millsaps hosts the Tigers, currently 3-2 overall and 2-1 in SAA play, on Saturday, Oct. 19 with kickoff set for 2 p.m.