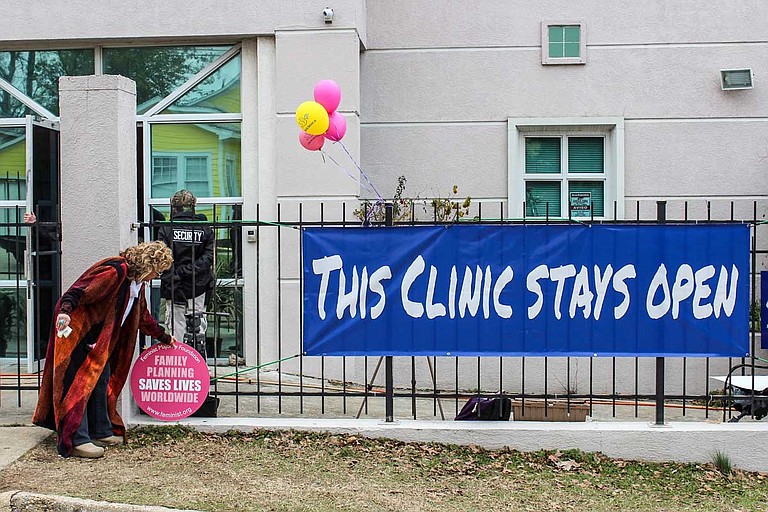 Jackson Women's Health Organization owner Diane Derzis hung up "This Clinic Stays Open" signs outside the clinic, which is now pink, after the Legislature passed an admitting-privileges law. Photo by Ashton Pittman.

Mississippi's ban on abortions after a heartbeat becomes detectable could be revived if a three-judge panel in New Orleans decides to reverse a Jackson federal judge's earlier ruling that the law is unconstitutional. In hearings this morning, the 5th U.S. Court of Appeals in New Orleans is reviewing that decision.

The Mississippi Legislature passed and Republican Gov. Phil Bryant signed the law in March. Supporters of abortion rights point out that it bans practically all abortions, because heartbeats are detectable around six weeks into a pregnancy—before many women even know they are pregnant.

The state's only abortion clinic, the Jackson Women's Health Organization immediately filed a lawsuit to stop the law, joined by the Center for Reproductive Rights. U.S. District Court for the Southern District of Mississippi Judge Carlton Reeves struck the law down, noting in a May 24 ruling that he had already struck down a 15-week ban in 2018. The 5th Circuit is reviewing that ruling, too.

If higher courts followed the Supreme Court precedent the pivotal 1973 Roe v. Wade case set, Reeves wrote, the law would not pass muster in higher courts, either. But the 5th Circuit—which oversees Mississippi, Louisiana and Texas—is known for its conservative leanings, and it has already broken with Supreme Court precedence once in the Trump era.

In September 2018, the 5th Circuit upheld a Louisiana law that would put such onerous regulations on abortion providers that it "would close every abortion clinic in the state except for one," the Center for Reproductive Rights said in a press release on Oct. 4. The law requires doctors who provide abortions to have admitting privileges at a hospital within 30 miles, but admitting privileges are notoriously difficult for abortion providers to obtain.

The Center for Reproductive Rights appealed the decision, and on Oct. 4, the U.S. Supreme Court agreed to hear that case, June Medical Services v. Gee, sometime next year. It will be the first abortion case to go before the nation's highest court since Trump appointees Neil Gorsuch and Brett Kavanaugh joined it. Kavanaugh replaced Anthony Kennedy, a moderate swing justice who cast the deciding vote to preserve Roe v. Wade in 1992.

Southern ‘Defiance’: The Fight for Roe Rages in Mississippi

Sen. Joey Fillingane, R-Sumrall, who sponsored an anti-abortion bill in Mississippi this year, told the Jackson Free Press that those laws are indeed intended to trigger a Roe "test case" before the Supreme Court.

The 5th Circuit's ruling in that case is significant because it runs counter to a ruling in 2016, when Kennedy was still on the court, that ruled a nearly identical Texas admitting-privileges law unconstitutional because, the court ruled, it poses an "undue burden" on women's rights.

Months after that ruling, Mississippi stopped defending its own 2012 admitting-privileges law, which never went into effect because it was tied up in court. In 2017, the State admitted that it "cannot identify any meaningful distinction between the Texas admitting privileges law struck down in (Whole Woman's Health v. Hellerstedt) and the admitting privileges requirement of H.B. 1390."

But Louisiana continued to defend its law, which that state's lawmakers passed in 2014.

"Louisiana is openly defying the Supreme Court's decision from just three years ago, in which they found an identical Texas law unconstitutional," Center for Reproductive Rights President Nancy Northup said in the Oct. 4 press release. "We are counting on the Court to follow its precedent, otherwise, clinics will needlessly close and there will be just one doctor left in the state to provide abortion care."

Louisiana now has three abortion clinics, down from 11 in 2001.

The 5th Circuit's decision on Mississippi's heartbeat law could be weeks or even months away. If the U.S. Supreme Court does eventually hear the Mississippi case, that likely would happen sometime after it hears the one over Louisiana's admitting privileges law.

Anti-abortion activists hope that, with two Trump justices on the court now, either case could serve as a vehicle for the Supreme Court to end Roe v. Wade.

In May, Mississippi Sen. Joey Fillingane, R-Sumrall, who co-sponsored the heartbeat bill this year, told the Jackson Free Press that those laws are indeed intended to trigger a Roe "test case."

"With a fifth conservative taking the seat of Justice Kennedy, who was considered a moderate on the court, I think a lot of people thought, finally, we have five conservative justices, and so now would be a good time to start testing the limits of Roe," Fillingane said.

After the initial hearings over the Mississippi law in Jackson on May 25, the Jackson Free Press asked Hillary Schneller, an attorney with the Center for Reproductive Rights, if she feared one of these cases could become the sort of "test case" Fillingane described—a possible death knell for Roe.

"I think the (U.S. Supreme Court) has stood fast by the right to an abortion for nearly 50 years," Schneller said. "Over that time, the court has been of different compositions, and while state politicians may be hoping for a different result here, these bans have never stood a chance in court. There are many ways the court could undercut the right to abortion, which I think we're being distracted from focusing on by the fact that states are passing these bans now."

Schneller cited restrictions like Louisiana and Mississippi's admitting-privileges laws as a cause for concern. "These are ways that the states are, in a more stealth strategy, undermining abortion without specifically challenging the core holding of Roe," Schneller said.

Next year, attorneys for the center will urge the U.S. Supreme Court to overturn the 5th Circuit Court's ruling on the admitting-privileges law—and to uphold its own 2016 ruling.