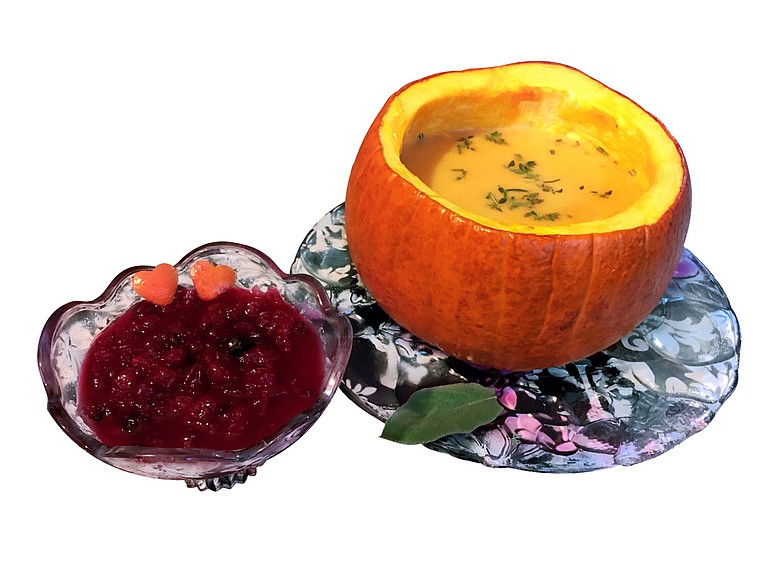 My sister didn't care for cranberries until I brought some of this. If you prefer sweeter cranberries, then use half-cup measurements of the sugar. I prefer tart cranberry sauce to counterbalance all of the other holiday food items.

1 package of fresh cranberries (a 12-ounce or so bag)

• Mix the sugars so that they make an even consistency.

• In a medium saucepan, bring orange juice to a boil. Add sugar mixture and stir to combine. Lower heat to medium and add cranberries. Cover with a lid or splash guard.

• The cranberries will begin to pop after a few minutes. Watch carefully so that the dish does not boil over. Once the cranberries are popped, which should take between 10 to 15 minutes, remove from heat and stir in the grand marnier and place in a serving bowl.

I am not sure how the dish is pronounced, but I'm sticking with "Kirby Soup" because it makes me laugh. The soup is served in a pumpkin bowl that appears almost like a jack-o-lantern carrying a delicious, fall-inspired vegetable stew. Mixing any leftovers into grits makes for a creative breakfast when complemented with scrambled eggs, pan-fried slices of tomato and bacon.

3 or 4 carrots, peeled and chopped

Salt and pepper, to taste

• Peel and cut the potato into chunks, peel and chop the carrots and dice the onion.

• Pour the vegetable broth into a pot, add the veggies, minced garlic and sage, and then bring to a boil. Reduce heat and allow to simmer, covered or uncovered.

• Cut open the tops of the pumpkins, as you would when preparing a jack-o-lantern. Remove the strings and seeds, but keep all of the pumpkin flesh inside. (Rather than discarding the seeds, cleaning and roasting them can make for a tasty fall snack for later, if you'd like.)

• Brush the insides of the pumpkin with a little olive oil, salt and pepper. Preheat the oven to 350° and place the pumpkins onto a rimmed baking sheet. Roast for about an hour until pumpkins are tender but not too soft (poke the insides with a fork to test). Remove and allow to cool.

• Strip the flesh of one of the pumpkins and add it to the simmering soup. Cutting the pumpkin into segments to help peel the meat from it may make the process easier.

• Use an immersion blender to blend the soup contents. As an alternative, you may use a standard blender, but take precautions to be safe when handling hot liquids. Covering a blender with a towel to prevent splashing may be advisable.

• Add salt and pepper to taste and blend in the soy sour cream to the soup.

• Pour the soup mixture from the pot or blender into the second pumpkin, which you will be using as a bowl. Keep the pumpkin bowl on a baking sheet so that punctures in the pumpkin shell don't cause messy leaks. You can scrape the sides of the pumpkin bowl to get more pumpkin meat as you serve the stew.