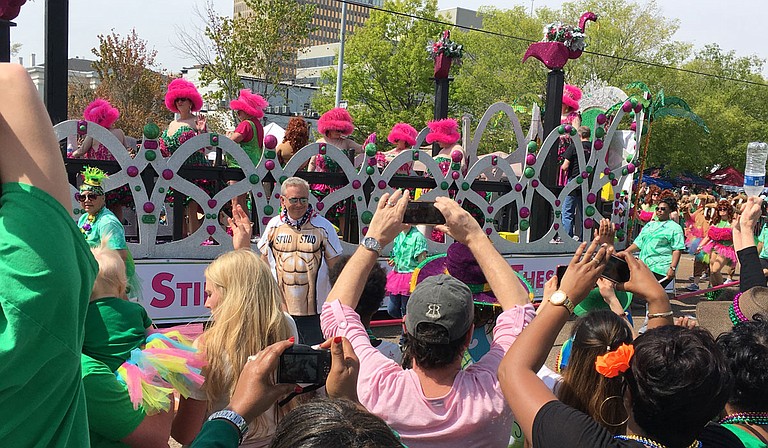 The 2020 Hal's St. Paddy's Parade will take place on March 28. The theme of the event is "Here's Looking at Rude, Kid," which is both a reference to a line taken from "Casablanca" and a nod to 2020 parade grand marshal Trace Alston, leader of the Rude Men marching krewe. Photo courtesy Kristen Brenemen

Malcolm White, founder and organizer of Jackson's annual Hal's St. Paddy's Parade, recently collaborated with Visit Jackson, the City of Jackson and Downtown Partners to maintain the 36-year-old event without a revamping of its structure, at least for 2020.

Security concerns, involving outdated barricades at an insufficient number, and the increasingly high cost of insurance for the parade, had led White to consider changing the nature of the parade from one featuring motorized floats and vehicles to only including marching groups, White told the Jackson Free Press.

"The City does not own enough barricades to secure the entire length of the parade route so that it is impenetrable to people walking around," White says. "We've been able to manage over the years, but it has gotten bad over the past two or three years, and something needed to be done or the parade would need to change.

White says that expenses to produce the parade while still keeping it a free event have risen over the years.

"The only commercial part of the parade is sponsorships and revenue from the after-party, and those are no longer adequate to pay for the parade," he says.

White wrote to Jackson Mayor Chokwe Antar Lumumba, the Jackson City Council, Downtown Partners and the Jackson Visitors Bureau in June to give them notice about his need for interlocking professional barricades and asked for a plan by October. The organizations made some progress, White told the Jackson Free Press, but did not raise the money by then. In late October, he wrote a post on his Facebook page about the concerns facing the parade, but decided that as long as some kind of effort to raise the money materialized, he would hold off on a decision until November.

"With the money we secured from the donors we can do a one-time rental for the barricades for next year," White says. "After that, we need to solve the problem of whether to keep renting these barriers every year or purchase them, as well as looking at other public safety measures. I feel like the City needs this equipment, because it hosts other parades and large events that need the same kind of security we're asking for, so it's not a request just for us. I think everyone should have an interest in getting this goal accomplished."

One solution White says he is looking into for the parade's fundraising difficulties is changing the organizational structure behind the event into a nonprofit similar to the Mississippi Book Festival and other local events. The nonprofit plan, if implemented, would separate the Hal's St. Paddy's Day Parade and its related events, including a pet parade and annual 5k walk, from the after-party and street dance event that takes place in the Hal and Mal's parking lot after the main parade ends.

"A nonprofit would be able to raise money for all the family-friendly activities the day of the parade, and those who want to support it can do so and get a tax break," White says. "Meanwhile, Hal and Mal's, Martin's and other businesses would operate the dance. Separating the alcohol aspect from the public parade could make it more attractive for people to donate to the event and for organization's to insure it, and would allow donations to be tax-deductible since they would be going to a nonprofit."

The 2020 Hal's St. Paddy's Parade will take place on March 28. The theme of the event is "Here's Looking at Rude, Kid," which is both a reference to a line taken from "Casablanca" and a nod to 2020 parade grand marshal Trace Alston, leader of the Rude Men marching krewe. Jill Conner Browne and the Sweet Potato Queens will participate in the parade, and Mustache the Band, The Chee-Weez and AJC the DJ will perform live at the after-party. Tickets for the after-party are $10 and are available at seetickets.us.

Jackson native Connor Mize, who previously worked as executive chef at Saltine Oyster Bar and sous chef at Estelle Wine Bar & Bistro, opened his own food stall, Yuzu Ramen, at Cultivation Food Hall in The District at Eastover (1200 Eastover Drive) on Monday, Nov. 25. Mize's stall is located on the west side of the food hall next to Fete au Fete.

"I've been wanting to set up a ramen concept for a while after having made pasta dishes for a long time at other restaurants," Mize says. "I started researching Asian meals and got deeply interested in ramen. I even developed my own ramen dough recipe so I can make my own noodles by hand at the stall."

Malcolm White, the current executive director of the Mississippi Arts Commission and co-owner of Hal & Mal's, first organized WellsFest in 1984 as a way to thank the late Wells United Methodist Church pastor Rev. Keith Tonkel for officiating White's wedding. White offered his services in booking musical acts and setting up a fundraising event to support the church's building fund.

Since its launch, the music festival has raised more than $1.5 million for local nonprofit agencies such as the Good Samaritan Center, Habitat for Humanity Mississippi Capital Area, Operation Shoestring, The Mustard Seed and more. WellsFest also includes an art auction and golf tournament held during the week of the festival in September.

Wells Church selects the beneficiary for WellsFest each year through a competitive process. The deadline for submitting applications for consideration as the 2020 WellsFest beneficiary is Nov. 30, 2019.