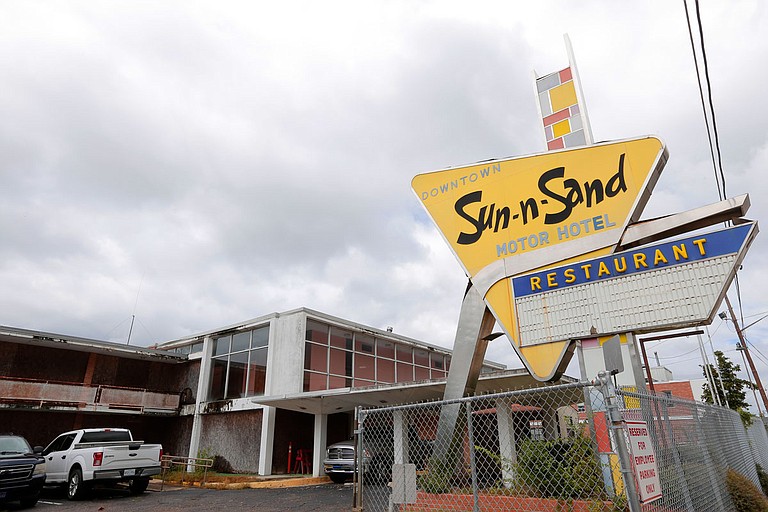 Trustees for the Mississippi Department of Archives and History have put downtown Jackson’s Sun-N-Sand Motor Hotel on consideration for a state landmark designation. Photo by Imani Khayyam

JACKSON, Miss. (AP) — A hotel that was a gathering spot for Mississippi lawmakers and lobbyists may be saved from demolition if it can become a historic landmark.

Trustees for the Mississippi Department of Archives and History have put downtown Jackson’s Sun-N-Sand Motor Hotel on consideration for a state landmark designation.

A 30-day public comment period began Nov. 5. After that ends, trustees will decide on the designation, WAPT-TV reported.

The Sun-N-Sand opened in the 1960s near the state Capitol. It closed in 2001 and the buildings have been deteriorating.

On July 10, the Mississippi Department of Finance and Administration announced its intent to tear down the building but keep its iconic midcentury sign.

The Sun-N-Sand was owned by a private developer after it closed, and the state purchased the property for $1 million this year. State employees have been using the parking lot, but the buildings have been boarded up.

Mississippi Heritage Trust in 2005 put the Sun-N-Sand on its list of the state’s 10 most endangered historic places, and the trust recently asked Archives and History to consider landmark status.

Lolly Rash, executive director of the heritage trust, told the Mississippi Business Journal that a petition to save the Sun-N-Sand had more than 1,000 signatures by early this week.