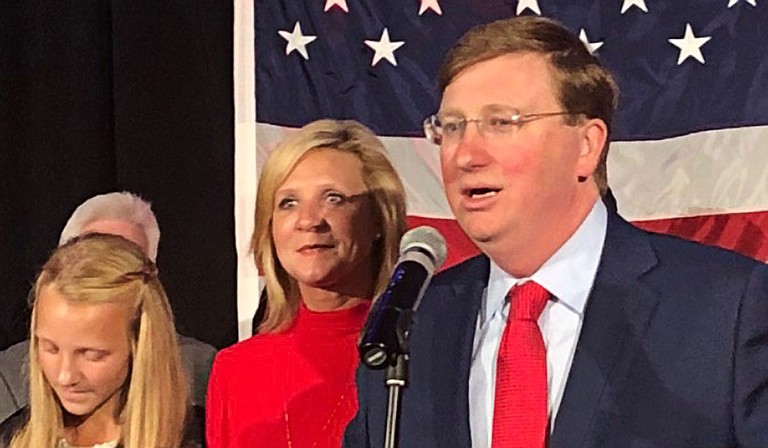 FWD.us, a criminal-justice reform organization, says it is "heartened" by small reforms Mississippi leaders like Lt. Gov. Tate Reeves have made in recent years, but is is urging a focus on cutting down "extreme" sentencing laws. Photo by Nick Judin

"Mississippi's criminal-justice system is in a pretty dire place and has been in a long time and appears to be moving, instead of in the right direction, in a worsening direction over the past several years," FWD.us Senior Criminal Justice Reform Director Zoe Towns told the Jackson Free Press late last month.

"Our focus has been that, as this transition of leadership occurs, to ensure that the issue is front of mind. We believe there are a lot of things that future governor could do if they are prioritizing criminal-justice reform."

Yesterday, FWD.us released a report concluding that "habitual" penalties are driving Mississippi's "incarceration crisis," as prosecutors give repeat offenders unusually long sentences for crimes like drug offenses. In many cases, that results in life sentences or "virtual life sentences," meaning sentences that are so long an inmate will likely die in prison.

The study found that more than 2,600 people are serving prison sentences with habitual penalties in Mississippi. Of those, about one-third are serving 20 years or more, and about one-sixth are serving either life or at least 50 years.

Local prosecutors can apply habitual sentences at their discretion—and they often do so in a way that disproportionately imprisons black men. Black adult men make up just 13% of the State's population, but account for more than 75% of the people in Mississippi prisons with 20 years or longer for habitual sentences.

At a rally against mass incarceration in Brandon, Miss., in July, criminal-justice and prison-reform advocate Kenneth Glasgow compared the mass-incarceration problem to African American slavery. He is a pastor from Dothan, Ala., and the brother of civil-rights activist and MSNBC host Al Sharpton.

'Not Asking Mississippi to be on The Vanguard'

"These findings confirm that extreme sentences are a major driver of the incarceration crisis in Mississippi," Laura Bennett, the manager for criminal justice reform at FWD.us said in a statement Tuesday. "That is why a growing number of state leaders and bipartisan voices are calling for common-sense reforms to the habitual laws that will safely reduce incarceration and corrections spending."

Those voices include not only progressive organizations like the MacArthur Justice Center, but also Empower Mississippi, a right-leaning group known more for its school-privatization advocacy. Empower has worked closely with Republican legislators and with Mississippi Lt. Gov. Tate Reeves on efforts like charter schools and private-school vouchers. Reeves won the race for governor on Nov. 5, and will assume the office in January.

With the election year behind them, and perhaps the legislative timidity that comes with it, criminal-reform advocates think Reeves and the new slate of lawmakers have the opportunity to significantly reduce the state's incarceration crisis.

"People spend a disproportionately long period behind bars due to a series of laws and decisions that are being made at the executive and legislative levels. And any kind of meaningful steps forward in Mississippi is going to have to include some pretty robust sentencing reform. This is not asking Mississippi to be on the vanguard," Towns told the Jackson Free Press.

The FWD.us report found that habitual penalties come at a high cost to the state. FWD.us looked at 78 prisoners serving life and "virtual life" habitual prison sentences for drug crimes. Those inmates are collectively serving 4,668 years, which will cost state taxpayers nearly $70 million over time, the study found.

Overall, the report notes, Mississippi taxpayers spend about $360 million on its prison system per year. The state has the third highest imprisonment rate nationwide, behind only Louisiana and Oklahoma. Each of those states, though, has enacted "major reforms to reduce incarceration," the FWD.us press release notes, while Mississippi's incarceration rates increased in recent years even as the Legislature passed and Gov. Phil Bryant signed modest criminal-justice reforms into law.

The small reforms State leaders have either enacted or proposed in recent years often focus on "re-entry," or making it easier for people to rejoin their communities once they get out of prison. In an interview in the Jackson Free Press ahead of the governor's race, outgoing Mississippi Attorney General Jim Hood, the Democratic nominee who lost to Reeves on Nov. 5, talked about some re-entry reforms he has worked on in the attorney general's office.

"I've been advocating for re-entry since I've been attorney general," Hood said. "If people don't have any hope, they're not going to get a job and be a productive citizen in many cases unless you help them. And so just some of the ways we came up with that didn't cost any money, like re-entry counseling. You can't get a job with an MDOC card. So, we had to try to get them drivers licenses."

Many conservative Republicans, who in recent decades often took hardline "law and order" positions along with some Democrats, have also supported re-entry reforms in recent years, including Reeves, outgoing-Mississippi Gov. Phil Bryant and President Donald Trump.

"I've got to get re-entry programs," Bryant told a crowd at the National Governors Association meeting in Washington, D.C., in February. "We've got to get folks back into the workforce. I've got 41,000 job openings in the state of Mississippi. We used to have people looking for jobs; now we've got jobs looking for people."

While re-entry programs are important, Towns said, those reforms alone will not alleviate the State's sentencing crisis.

"We're heartened by some of the comments that Lt. Gov. Tate Reeves has made and the lieutenant governor's history of moving justice reforms through the Legislature since he's been Senate president. ... I think that there has been a fair amount of focus on re-entry at the capitol in recent years, and that's good, and that's a great first step. But that is not what's driving Mississippi's incarceration crisis," Towns said .

The same is true when it comes to proposals to end or reduce the use of private prisons in the state that Democrats, like Hood, have suggested, she said: Private prisons present problems, but prison sentencing laws should be the priority.

"A lot of ancillary and periphery issues with Mississippi's criminal-justice system are incredibly problematic and worrisome. That list is actually incredible long. Those things should all remain on the list," she said. "I think if the conversation at the Capitol and at the governor's mansion in 2020 is not grounded in, 'What can we do right now to bring this incarceration rate down through legislative and administrative action?', you're going to have a lot of good intentions and maybe some improvements, but you're still going to have the same incarceration rate."

'Is It Really Cutting Down on Incarceration?'

In 2014, Bryant signed a criminal-justice-reform bill into law that refocused enforcement of some drug crimes away from the criminal-justice system and toward rehab and intervention programs. It also created a uniform definition of "crime of violence" in an effort to reduce the number that nonviolent offenders serving sentences akin to those of violent offenders. That reform also ended the practice of putting people back in prison for technical parole violations, sending them to detention centers instead.

Earlier this year, Bryant signed "The Next Step Act" in Mississippi, expanding the state's drug courts to handle cases involving mental illness and military veterans. It also ends the practice of the State revoking driver's licenses for unpaid fines, or suspending them for those convicted of simple drug possession unrelated to the operation of a motor vehicle.

Those were good steps, Glasgow told the Jackson Free Press in July, but Bryant and other Republican leaders could do more.

"Is it really cutting it down on incarceration? That's like putting a BAND-AID on a knife cut. There's blood everywhere," Glasgow told the Jackson Free Press at the criminal-justice reform rally in July. "If Governor Bryant (and other Republicans) really wanted to do prison reform, they could do it."