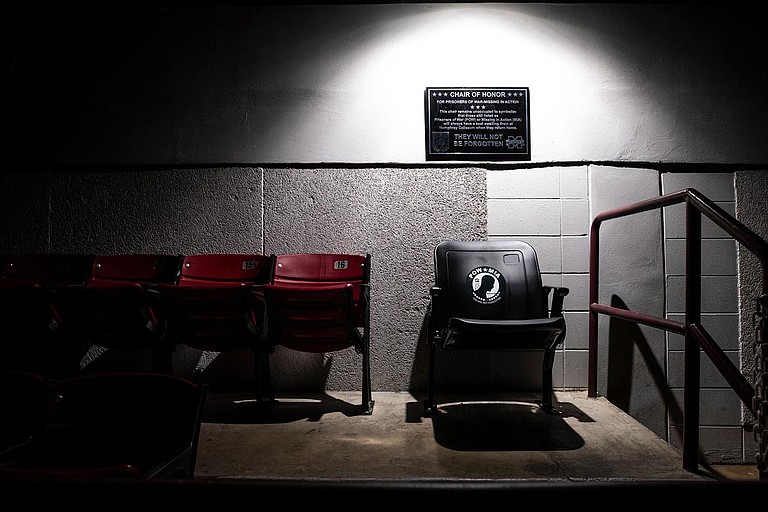 The university will formally unveil the chair of honor in Davis Wade Stadium as part of MSU's military appreciation football game against Alabama State University on Saturday, Nov. 16.

Five permanent seats in Davis Wade Stadium will pay tribute to the five branches of the military: the Army, Air Force, Navy, Marine Corps and the Coast Guard. MSU plans to have a veteran of each branch occupy the seats at future football games, the release says. All six of the seats, including the chair of honor, are located at midfield near the Bully memorial statue.

MSU unveiled the POW/MIA chair of honor in Humphrey Coliseum, which is located in section 105, during its military appreciation women's basketball game against Tennessee Martin on Monday, Nov. 11. The university will formally dedicate the chair in Dudy Noble Field, which will be on the concourse, during the 2020 baseball season.

The Kinnaird Endowment in the Millsaps Department of Mathematics supported the competition, which was free for all students, a release from Millsaps says.

Students competed in ciphering, written and team problems. Contest rules barred the use of calculators, electronic devices, or reference materials.

Bowling Night Out at JSU

The Jackson State University Graduate Student Association and the university's Division of Undergraduate Studies recently partnered with the Metro Jackson Community Prevention Coalition for the 6th Annual MJCPC Bowling Night Out at the Metro 24 Bowling Lane (3003 John R. Lynch St.). The event served to demonstrate to students that fun is possible without alcohol, tobacco or other drugs, a release from JSU says.

Fifty-three graduate and undergraduate students attended the event, the release says. Some students bowled using Driving Under the Influence goggles, which simulate the effects of driving while impaired.